Bloody globalisation. It's not enough to have a film about a bunch of jocks and hot co-eds being chased by a few zombies any more. Now they've got to be taking over the whole world. Or so you'd think: new summer tentpole Pitt-flick World War Z might want to be the blockbuster its marketing suggests, but it has a schizophrenic tendency to flit between bombast and quiet contemplation. Which would be fine, except that all of its best ideas have already been done better elsewhere.


You need ideas to do a good zombie film these days, too. It's not enough to dismiss them as supernatural and ignore their origins: we need test tubes. We need bar charts. We need a guy in a white coat from the CDC walking us through it all. So a global pandemic is just the ticket, for two reasons: one, audiences are an increasingly rational bunch and respond well to real-world grounding, particularly if the success of contemporary superhero films is anything to go by. Even Iron Man and The Hulk are explained by science. Made-up movie science, yes, but all internally sound. And two, if zombies are just a bunch of spooks, where's the satisfaction in the hero coming up with a bullshit way to stop them? 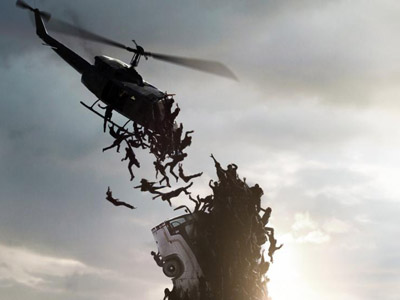 
Step forward Brad Pitt to come up with a slightly less bullshit zombie repellent. He's retired from his post as a global … disease-figurer-outer … guy for the UN, so he can spend more time with his family. Then when the zombocalypse arrives, he's reluctantly coaxed into harm's way to help figure out a cure because "We need the best, damnit - and you're the best", and so on.

Fine, whatever. But what follows is a strange attempt to juxtapose a huge sweeping disaster movie and a quieter character drama, and ends up looking like it was edited by a guy suffering from drastic mood swings. One minute Brad's off in Israel, frantically running away from swarms of marauding zombies, the next he's creeping around a WHO research facility in Cardiff (yes, Cardiff) trying to keep as quiet as he can. For a long, long time. How much of this imbalance is down to the discarded and rewritten ending, it'll be interesting to find out.

This odd split personality affects World War Z ('zee' not 'zed', for me: otherwise you lose the pun on 'World War Three') at a micro-level too: it's a bloodless zombie film, with all the biting and chopping happening just out of the frame, suggesting it's been heavily cut to get the 15 certificate. The promised geopolitical slant, which was apparently one of Pitt's primary motivators for buying the rights to the book, never quite materialises either, though you feel like it's itching to come out. 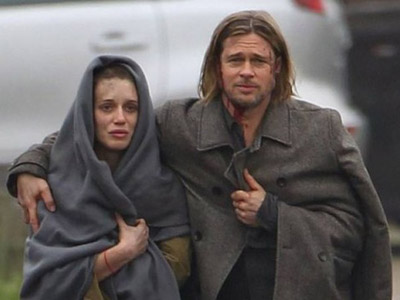 
As I said, there are ideas here, but they don't stand up to scrutiny against the film's contemporaries. The Walking Dead has taken the zombie holocaust story and made it into a tense, affecting drama which focuses on its characters, never quite letting on whether the rest of the world is going through the same thing. Steven Soderbergh's excellent Contagion showed the other side of this coin - the global pandemic - but had the sense to do it more quietly, with greater emphasis on the human cost.

When World War Z does each of these things separately it's pretty effective, and in particular it delivers a refreshingly muted finale, with the world's fate resting on Pitt's shoulders while he's alone in a room, rather than fleeing a flesh-eating horde. But it can't manage both. Disaster epic or small-scale pot-boiler? In the end you've just got to decide whether you're zom A or zom B.