Wrath Of The Titans

When you consider the critical shitpanning that was given to Clash Of The Titans upon release, it's hard to understand how a sequel was ever greenlit. Absurd plot points, stilted dialogue and 3D so eye-bleedingly bad it nearly undid all of Avatar's goodwill singlehandedly...and yet here we are again. With the promise of bigger and better monsters - and a new, less anachronistic haircut for Sam Worthington - is this film a vast improvement? Nuh-uh.


I don't want anyone to think that I saw this film with negative expectations when I say this, but Clash Of The Titans is hands-down my worst cinema experience of all time. It's not all due to the film being terrible, but between the dimly-lit projection and mostly blurry 'two-and-a-half dimensions' it had been converted to, it was a nauseating 106 minutes.

But, from the offset, this sequel is far cleaner and crisper, the characters have been developed in marginally interesting ways and the inevitably flawed plot is engrossing enough to warrant a reasonable amount of investment. In fact, once the film hit its stride, I actually found myself mildly impressed with the efforts made to best its predecessor. But then it slowly but surely happened: the entire third act came crumbling down around my ears with a deafening crash as the film descended into utter visual chaos. With every inch of screen filled with pixel paint and indistinguishable action, the whole thing just became mind-numbing to watch.

All the action works best when we see it from mid-distance but most of the time we are thrust right into extreme close-ups of the ensuing disorder: exploding colours, splashes of sparking lava, crumples of dust clouds - it all looks spectacular but what the fuck is going on? 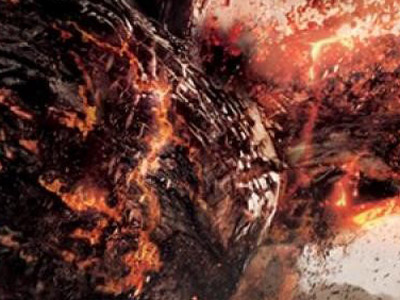 Try staring at this for 30 minutes


But I’m getting ahead of myself. What’s obvious at the start is that this is presented as a more mature sequel to the original. Worthington's Perseus is now a dad himself, vowing to protect his son from the matters of gods and titans. But, in a twist, Daddy Zeus now needs his help, as the snidy Hades plots to raise Kronos, a lava-like monster who is in fact the father of all the gods. As a result of his plans, the world is pretty much coming apart at the seams.

And here we have several issues already: How can Zeus – the ruler of the gods – need help from Perseus? In what sense is it possible for the gods to have a dad, let alone one that is a giant Volcano beast? How did Zeus get duped by Hades again? He’s the GOD OF THE UNDERWORLD - this hardly screams ‘trustworthy’. Of course, these kinds of questions are part and parcel for a film of this kind, but when the rules aren’t explained properly, the flawed reasoning will nag at you throughout. Take Perseus for example – he’s half man, half god and acts like he is mortal, and yet he goes through more physical punishment than anyone could actually stand. On more than one occasion, his head is slammed through concrete pillars. So is he invincible? Is he just a bit strong? At what point is he actually ‘risking his life’?

And the other problem with rule-fudging is that every life-threatening situation no longer seems serious because, inevitably, there’ll be some lazily written magical solution. After a big build up to entering a mysterious labyrinth – which is teased as a surreal head-twister by an admittedly brilliant Bill Nighy – Perseus actually escapes by sticking two sorcery sticks in the ground. These apparently have the power to transport him to the next scene, and I doubt even Zeus knows how or why. 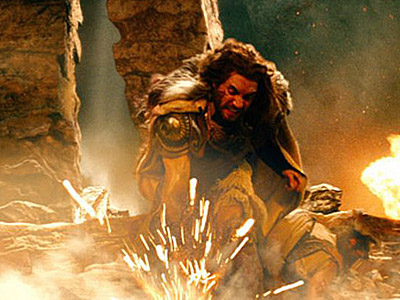 Quick! To the end credits! STAT!


Overall the film does have high points. Toby Kebbell steals the show as Agenor, a kind of comedy sidekick to Sam Worthington’s po-faced hero, who achieves the difficult job of providing genuine humour to a film that is otherwise laughably pompous. Also, some of the special effects really are magnificent – brilliantly designed monsters seen in utterly stunning 3D. But when there are enough retarded moments to make yet another list of logic farts, this sequel ends up being just as dumb and protracted as the first film.

More:  Wrath Of The Titans  Jonathan Liebesman  Sam Worthington  Liam Neeson
Follow us on Twitter @The_Shiznit for more fun features, film reviews and occasional commentary on what the best type of crisps are.
We are using Patreon to cover our hosting fees. So please consider chucking a few digital pennies our way by clicking on this link. Thanks!