I'm sorry to dispel the idea that this site is run entirely by the kind of geeks who immerse themselves in every form of popular culture available, but I'm not much of a gamer. By all accounts, the other guys are, but I couldn’t tell apart a Far Cry from a Mass Effect, or even a Vita from a DS for that matter. I mention this only as a way of making it clear upfront that I may not be the best person to appreciate Wreck-It Ralph's myriad of 8-bit cameos and gaming references – just in case my right to review a film about a fairly unfamiliar subject matter is ever called into question. Let alone my opinion: it's actually rather good.


Of course, this being the latest Disney animation for kids, no one should expect to have to go into the cinema well-researched in order to follow the plot. But with Sonic The Hedgehog adorning the poster and a Who's Who of retro game characters filling out the trailers, this film has got a lot of geeks onside by presenting the delicious prospect of seeing Street Fighters rub shoulders with Mortal Kombats and Bowsers and Paperboys and so forth. Yet, the biggest problem with the film is that, after setting up this promise for title crossovers early on, all the best in-jokes and cameos are used up in the first 20 minutes.

What starts off to be a brilliant story filled with recognisable faces and cute homages, eventually stalls into more familiar territory that almost feels like it is a different film altogether. What we get overall is a very clever, delightfully funny and visually stunning Disney film. And yet we end up watching it having already seen its potential to be something much more enticing. 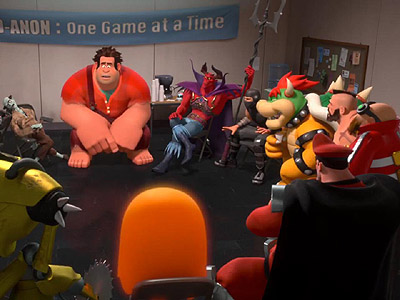 
John C. Reilly voices Wreck-It Ralph, a Donkey Kong-alike baddie of an arcade game in which goody two-shoes Fix-It Felix (McBrayer) is the hero. Sick of being treated like a villain, Ralph gets it into his head that he needs to win a medal in order to be seen as a champion. After a brief spell in a sci-fi shoot-em up, he winds up in Sugar Rush, the setting for a candy-coated race car game. There he meets Vanellope von Schweetz (Silverman), a glitching character in the game who is no longer allowed to race. Together they make a deal: if Ralph helps Vanellope to enter a race, she will win him the medal he is so desperately after.

After seeing 8-bit Ralph enter a Halo-style alien shooter game, you realise that the potential for this film could be huge. In his search for a medal, I'd want to see Ralph wind up in all kinds of different games: a Tomb Raider style adventure, a Grand Theft Auto caper and yes, even a game of FIFA. In fact, licensing agreements willing, I’d want Ralph to venture into Arkham Asylum, or aboard the Death Star. So it's a shame that, once in Sugar Rush, that's where he stays for pretty much the rest of the story, with the film making no attempt to cash in on the wider world it has already set up.

What makes this decision just as frustrating is the fact that the plot suddenly shifts focus. After getting used to the idea that Ralph's attempts to win a medal is what is driving the story, attention changes over to Vanellope trying to win a race. The end goal is essentially the same, but it feels like one maguffin has been swapped out for another one, as we now root for a different character. 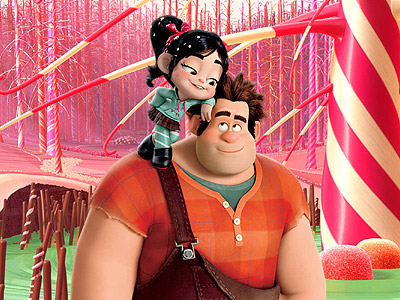 At least make them fight each other, Soul Calibur style


Those niggles aside though, this is still – as expected – Disney on rather excellent form. The story may not live up to its potential, but there are still plenty of game-themed gags to revel in as well as an easily relatable 'triumph-over-adversity' message for kids (Vanellope's glitching problem can believably stand for anything from dyslexia to autism). It helps too that the voices involved are all perfectly cast, with the squeaky voiced Silverman passing effortlessly for a little girl, the always earnest McBrayer acting as the too-nice Felix, Jane Lynch as a tough, no nonsense soldier and even Alan Tudyk doing an impressive Ed Wynn impression for tyrannical Sugar Rush figurehead, King Candy.

The result is the perfect four-star film; one that excels in practically every aspect and yet squanders an opportunity to be even better. It's a great story, with frequent laughs and heart-tugs in all the right places, and yet ultimately you'll end up feeling like there's a whole lot more of this concept to explore. Here's hoping that, if ever a Wreck-It Ralph 2 is announced, it will take place in either FIFA 11 or whatever the last Call Of Duty was. Just so that I can feel like I’m catching all the references.

More:  Wreck-It Ralph  Disney  John C Reilly  Sarah Silverman  Rich Moore
Follow us on Twitter @The_Shiznit for more fun features, film reviews and occasional commentary on what the best type of crisps are.
We are using Patreon to cover our hosting fees. So please consider chucking a few digital pennies our way by clicking on this link. Thanks!