With Brett ‘The Hitman’ Ratner killing off half the characters in X-Men: The Last Stand, it’s no surprise that the franchise had to be rebooted, but do we really need to see a Bash Street Kids version of the mutant superheroes? And what can it tell us that we don’t already know? Well, how about the fact that Magneto used to be a globe-trotting Bond-a-like and Xavier was a beer-chugging ladies man? Admit it, Ian McKellen and Patrick Stewart suddenly seem much more interesting…

Set against a cool 60s back drop (Xavier says “groovy”), the film focuses on the soon-to-be Prof’s (McAvoy) desire to find people with special abilities like himself, chronicling his acceptance into the CIA and the creation of his first team of rag-tag mutants, who eventually assemble to stop the powerful Sebastian Shaw (Bacon) from starting World War III. At the same time, Erik Lehnsherr (Fassbender) is on a one-man mission to track down and kill the same man because, in his former guise as the Nazi Dr Schmidt, Shaw was responsible for the torture of young Erik and the murder of his mother. Of course, Charles and Erik meet along the way and a blossoming chromosomance develops.

Prequels by their very definition have an immediate obstacle to overcome – we already know where the story is headed and, just like the frequent games of chess played by our two protagonists, we’re often left to just watch all the pieces get moved into their necessary positions. But with this film, the progression of the characters seems natural – this is a story of its own accord and, with a few decades difference between this and the beginning of Bryan Singer’s trilogy, you’re never too sure of how close the film will get to X-Men’s starting point.

Having said that, the film does suffer a little from conveniently glossed-over motives. On more than one occasion a character switches allegiances without us ever really seeing any reason why they should. And, come the film’s end, Erik’s transformation into the very preachy Magneto feels like it missed a scene or two along the way (he hadn’t called his fellow mutants ‘brothers and sisters’ before this, had he?). 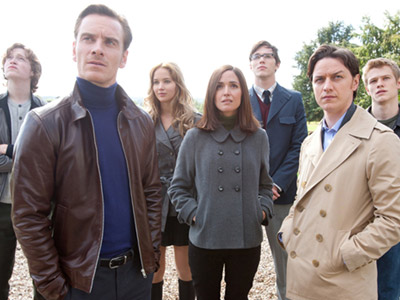 However, this is still a more character-driven film than the trilogy we already know and like/love/loathe (in that order) and, perhaps most surprising of all, the action set-pieces are fairly spread out, with the focus instead placed on the moral and political implications of mutants coming out of the global closet. This makes for a slower film than some may be expecting but it is all the more engrossing for it.

By the end, we are presented with two very reasonable but conflicting ideologies divided by one decision: should mutants lash out against the oppressive non-mutants (that’s us by the way, kids)? Xavier makes a pre-wheelchair stand: “we should be the better men” he argues. “We already are” comes Magneto’s pro-evolution response. It’s hard to disagree with either of them.

And yet the film still knows when to have fun. Between McAvoy’s brilliantly toffish take on Xavier, a great training montage and an excellent not-to-be-ruined-here cameo, which contains possibly the best line in the script, the movie manages to maintain a high level of humour throughout without ever showing too much camp…unless you count the Auschwitz concentration camp at the start of the film (*tugs at collar*).

Of course much of the film’s success rests on the shoulders of both McAvoy and Fassbender; the former excellently portraying an unsure but still wise young man, while the latter is the essence of bottled rage in the body of a trained killer. In fact, Fassbender’s steely determination and poise in his pursuit of Shaw will have you doubting Daniel Craig’s suitability for Bond. 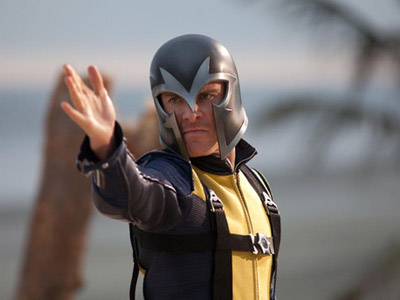 Shame about the Beadle hand

It’s also good to see that Kevin Bacon isn’t just neatly sidelined into the ‘one-dimensional villain’ role. Shaw’s history with Erik and his manipulation of world leaders in order to bring about the Cuban Missile Crisis (that’s how it happened, folks) helps to make Shaw a worthy adversary for the newly-formed band of superheroes and, while action-wise his character is robbed of a decent all-out fight scene, a nice slice of Bacon, complete with swagger and charm, more than makes up for it.

Unfortunately, with the impressive fleshing out of these three lead characters comes the inevitable oversight of the supporting mutants, all of whom seem a little inconsequential, perhaps because the better, more famous characters have all been used up in other films. Darwin, for example, a mutant whose power is to ‘adapt and survive’ in any given circumstance is given particular short thrift without us ever seeing what he is fully capable of. Likewise, Angel seems redundant as the flying hottie who spits fireballs and Banshee’s use of his power – a very effective scream – somehow makes him fly. How? It doesn’t really matter at this point, does it?

And there are other trifling criticisms: Beast’s make-up prevents actor Nicholas Hoult from moving his mouth properly when he speaks, the characters insist on giving each other their existing comic-book names as codenames (“I want to be called…Mystique. Because…” WE GET IT) and there are more than a couple of budget-revealing CGI shots. But, these are extremely picky points and the film deserves to be given a break for these niggles in exchange for getting virtually everything else spot-on.

Overall, X-Men: First Class is exactly everything we could hope it to be: fun, compelling and exciting to watch. In many ways, it enhances the existing story we know so far and, in other more important ways, it tells its own fascinating tale. X-Men Babies this is not. Xaved By The Bell? Hardly. This is just X-Men Origins: X-Men. But then I guess that would have looked silly on the poster.

More:  X-Men First Class  X-Men  James McAvoy  Michael Fassbender  Kevin Bacon  Matthew Vaughn
Follow us on Twitter @The_Shiznit for more fun features, film reviews and occasional commentary on what the best type of crisps are.
We are using Patreon to cover our hosting fees. So please consider chucking a few digital pennies our way by clicking on this link. Thanks!