For a brief time there, Kevin James had potential; when his bumbling fat guy routine was sweet and charming, not depressing and pathetic. But then he fell in with Adam Sandler. Now he's trapped churning out this kind of monkey crap while Sandler sits back and counts his money. Yeah, Kevin James is totes the new Rob Schneider.


In what could easily be a Paul Blart sequel, Kevin James plays lovable zookeeper Griffin Keyes, who, after an awkward break-up with his girlfriend, feels the only way he'll get a girl is to quit his job at the zoo and search for something a little more glamorous. In a desperate panic, his zoo animals - who can talk, by the way - decide to teach their favourite zookeeper how to get the girl. And that's about it. It took five writers, one being James himself, to come up with this.

Seriously though, five people? The whole idea runs out of steam well before the half-hour mark; the rest plays out like a series of cobbled together pratfall scenes, bookended by Griffin's conversations with the animals. They look just as fed up as we do. 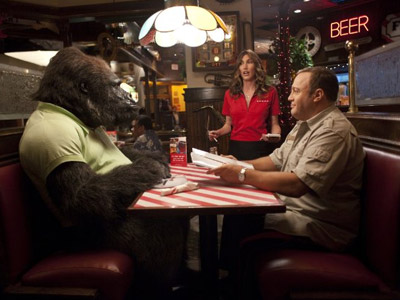 It's funny because THIS WOULD NEVER NORMALLY HAPPEN


The reason Zookeeper has scraped that second star is down to the voice cast, which is a hell of a lot more impressive than the film deserves. With the likes of Sylvester Stallone, Nick Nolte, Jon Favreau, Judd Apatow and even Cher giving up their vocal talents, the real cast get left in the bear pit. It speaks volumes when Kevin James is out-acted by a gravelly-voiced gorilla hankering for a TGI Friday's.

Rosario Dawson and Ken Jeong are the only ones who make it out with any dignity [Ken Jeong got out of a film with his dignity? Holy shit, it must be bad - Ed]. Dawson is as sweet as she was in Clerks II as the zoo's vet and Jeong steals his two scenes as the strange reptile specialist. 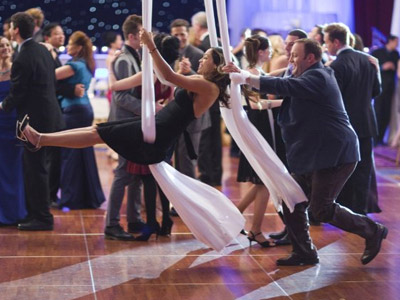 Well, at least we now know Rosario Dawson has a thing for fat guys.


Zookeeper is aimed squarely at kids, hence the release date smack bang at the start of the school holidays. Yeah, they'll get a kick out of the talking animals and the fat man falling over crap. Parents, however, will see the achingly predictable outcome within the first ten minutes, worry that the film's message (having a job you hate is better than a job you love because hot girls will take advantage) is possibly the wrong one and start wondering when Rob Schneider will crop up. Thankfully he doesn't.

If this is to be the height of Kevin James' career, Adam Sandler has a lot to answer for. My advice to James would be to get the next bus back to Queens and stay there.

More:  Kevin James  Zookeeper  Adam Sandler  Pratfalls
Follow us on Twitter @The_Shiznit for more fun features, film reviews and occasional commentary on what the best type of crisps are.
We are using Patreon to cover our hosting fees. So please consider chucking a few digital pennies our way by clicking on this link. Thanks!