If you thought Trespass, Nicolas Cage's forthcoming home invasion thriller, looked like run of the mill, get a load of Justice: even the name screams 'picked out of a hat'. The film is based around the not entirely unfair notion that if someone kills someone for you, you kind of sort of owe them one.

After Cage's wife, January 'superpower: sucking at acting' Jones, is seriously injured, Guy Pearce's TOTALLY LEGIT skinhead approaches him in hospital and offers redemption by any means necessary. Cage is too busy trying to furrow his botoxed brow to smell a rat, and ends up, oh I don't know, FRAMED FOR MURDER or something. Obviously.

From then on it appears to be a chase movie, with Cage's 'innocent' man attempting to clear his name while being pursued by, er, giant trucks and... the police? I'll be honest with you guys, I was mostly thinking about dinosaurs while watching this trailer. Boy, that period where Nic Cage was making exciting movies again sure didn't last long, huh?

But it's okay, because somewhere along the way, this happens: 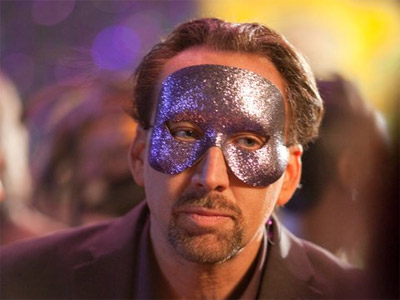 And the balance was restored!

More:  Justice  Nicolas Cage  January Jones  Guy Pearce
Follow us on Twitter @The_Shiznit for more fun features, film reviews and occasional commentary on what the best type of crisps are.
We are using Patreon to cover our hosting fees. So please consider chucking a few digital pennies our way by clicking on this link. Thanks!