You thought Nic Cage reclaiming his castle in the name of love in Trespass yesterday was Cage Rage? YOU AIN'T SEEN NOTHIN' YET.


Ghost Rider: Spirit Of Vengeance had better be amazing, because it was while shooting it in Romania that Nic Cage got into a fight with a local and screamed "I would do ANYTHING for honour. I would DIE in the name of honour!" Stands to reason your movie about a demon with a flaming skull should be more mental than your own personal life.

Thankfully, judging from this first trailer, this Ghost Rider redux is back on track. The first movie was fun, although quite why a character whose head is on fire should adhere to 12A standards was lost on me. In charge this time are cranks Mark Neveldine and Brian Taylor - sorry, that should read Crank's Mark Neveldine and Bran Taylor - who have rightly decided that perhaps the devil's own bounty hunter should be allowed to behave like his ass is bad. No love interest for you, Ghosty!

HE'S LITERALLY PISSING FIRE AND VOMITING LAVA. Also, the smoke pollution from his motorbike is LITERALLY DAMAGING THE ENVIRONMENT. What a bastard!

Set reports tell of Cage on fine form as the Rider (one reporter described watching him as "like watching a Bengal tiger attack") and at least this time we don't have to pretend it's not super awkward having him play a cocky kid wearing a wig and spray-on abs.

All it needs to get me really excited is a scene in which he pisses fire and OH WAIT HE ALREADY DID THAT THIS IS GOING TO BE AMAZING. 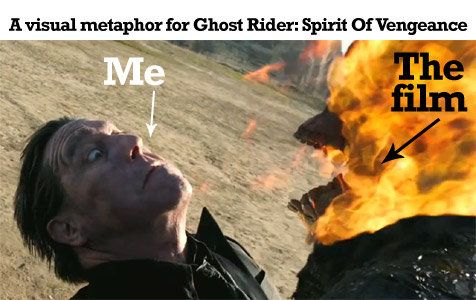 More:  Ghost Rider Spirit Of Vengeance  Ghost Rider  Nicolas Cage  Idris Elba  Neveldine And Taylor
Follow us on Twitter @The_Shiznit for more fun features, film reviews and occasional commentary on what the best type of crisps are.
We are using Patreon to cover our hosting fees. So please consider chucking a few digital pennies our way by clicking on this link. Thanks!