I laughed at my own headline :D
:(


The first ever trailer for Pixar's first ever live-action feature popped up on the web a few days ago (probably about a week by now *grumble grumble*), and sure it looks like a mish-mash of every single sci-fi/action concept you've ever seen, but sometimes isn't a bit of escapism all you want after a hard day at work? Jump in the air, wear some chains, shoot a green thing - not every film has to be a big Mallick-esque existential thinkyfest.

The smart way to begin this article would have been to mention the source novel 'A Princess of Mars', which was serialised in 1911 and is generally acknowledged as being massively influential on sci-fi musings ever since. At least that's what it says on Wikipedia, because I'd never heard of it before. So if the adventures of John Carter & Co. look familiar, then that's probably because author Edgar Rice Burroughs' ideas have been borrowed liberally over the last 100 years. Or something. Hey look, here's that trailer you wanted to see:

Bonus Quiz! Burroughs seemed like a pretty cool guy, what with all those futuristic ideas he came up with. But do you know who wasn't cool? That's right: Saddam Hussein. They did have one thing in common, however, seems they both loved that crazy, epic sci-fi fantasy artwork. See if you can guess which of the following were covers for Burroughs' books, and which were found in Saddam's infamous sex palace. Once you're done guessing, click the image to reveal the answers. Go on, it'll be fun! 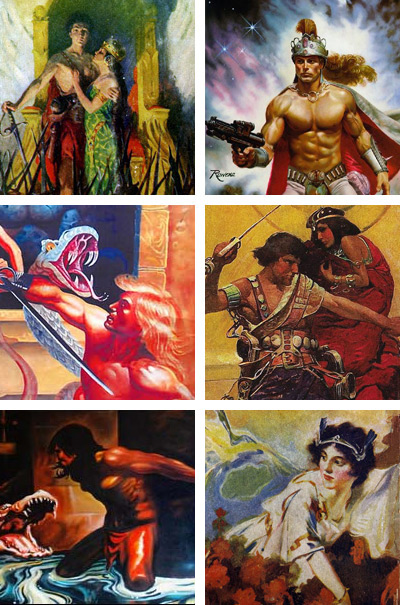 More:  John Carter  Pixar
Follow us on Twitter @The_Shiznit for more fun features, film reviews and occasional commentary on what the best type of crisps are.
We are using Patreon to cover our hosting fees. So please consider chucking a few digital pennies our way by clicking on this link. Thanks!