The trailer for Wes Anderson's new movie, Moonrise Kingdom, has just been released. Because I literally knew nothing about it, I decided to play a little game of Wes Anderson Bingo.


In my role as de facto Ambassador Of Movie Nonsense On The Internet, it's hard to keep up with everything; so much so, when sites began reporting the release of the trailer of Wes Anderson's Moonrise Kingdom, I realised I knew absolutely nothing about it. The perfect chance, I thought, to play a little game of Wes Anderson Bingo.

Before I watched the trailer, I set up a grid of actors, items and tropes typical of Wes Anderson movies, to see just how well I could predict the contents of the movie. Let's look at the game sheet. 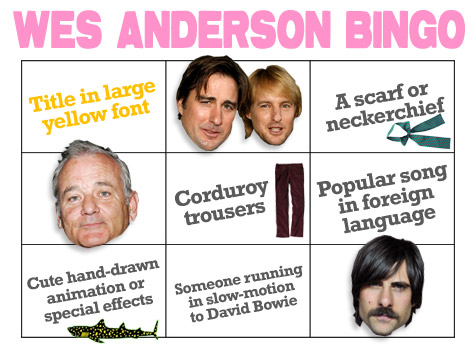 That's pretty solid, I reckon. I was going to include 'a fabulous hat' but I couldn't fit it on there. Without further ado, let's all of us watch the trailer for Wes Anderson's Moonrise Kingdom. See you on the other side.

Well how about that, folks? Six out of nine isn't bad going. I'd say a 33% turnover of quirk is pretty healthy. Here are my results. 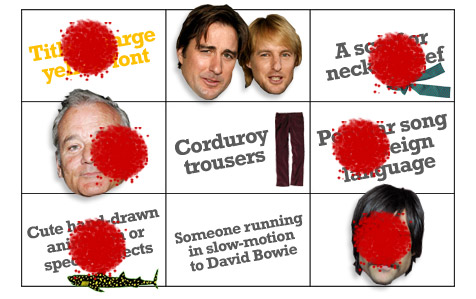 I really nailed the whole neckerchief thing. First scene, BAM. Unfortunately I don't get multiple points for multiple iterations. No David Bowie in there, but I that song was definitely French, so that's a win. It's a shame to see there were no Wilson brothers present, but fingers crossed for a cameo as rival scoutmasters or animated badgers or something.

At this point in the game, I should probably own up to not knowing the rules of Bingo. Did I win?

More:  Moonrise Kingdom  Wes Anderson  Bill Murray  Edward Norton  Bruce Willis
Follow us on Twitter @The_Shiznit for more fun features, film reviews and occasional commentary on what the best type of crisps are.
We are using Patreon to cover our hosting fees. So please consider chucking a few digital pennies our way by clicking on this link. Thanks!