This is what happens when you make a baseball movie with Brad Pitt instead of Charlie Sheen and Aaron Sorkin instead of whichever idiot wrote Major League.


I'm from England. We call french fries 'chips' and the sidewalk 'the pavement'. Crazy, I know. We also called baseball 'rounders', but that doesn't matter, because we hate both sports. UK TV viewers are literally more likely to watch crown green bowling, whose players have an average age of 112. It's actually pitied by the curling community.

Naturally then, baseball movies get a similarly short shrift over here. The last baseball movie I watched was about some kid in little league who broke his arm and found it gave him magical powers to pitch at 200 mph. I think it was called Field Of Dreams or something.

(*adopts Voiceover Man voice*)
ALL THIS IS ABOUT TO CHANGE.

I still don't care much for baseball, but take a look at the first trailer for Moneyball, which is scripted by Aaron Sorkin, stars Brad Pitt and is directed by Bennett Miller, the Capote guy. It's not about the sport of baseball per se, but the stats on which games are won and lost. Basically, it's as much about baseball as The Social Network was about Facebook.


It's a tough one to call, because judging from the trailer, you can immediately tell there will be at least one montage of inept players slowly coming good, plus several twinkly shots of Brad Pitt sitting alone in stadiums and looking earnest. On the plus side, it has Philip Seymour Hoffman in it, who makes this face a lot. 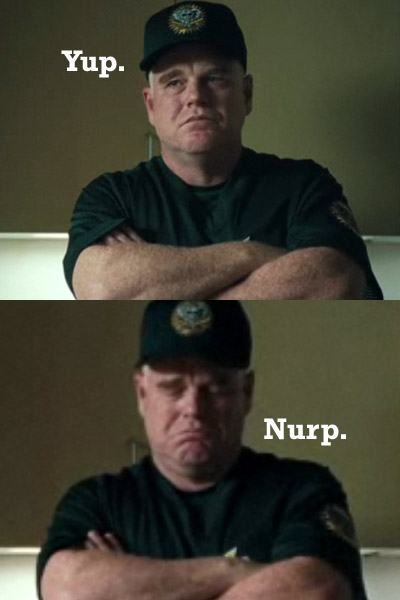 Also, is it wrong that I pre-judge Brad Pitt's movies on the style of his hair? Because what you're looking at here is Meet Joe Black revisited.

Someone should make a Blernsball movie. I'd watch that.
More:  Moneyball  Brad Pitt  Bennett Miller  Jonah Hill  Aaron Sorkin
Follow us on Twitter @The_Shiznit for more fun features, film reviews and occasional commentary on what the best type of crisps are.
We are using Patreon to cover our hosting fees. So please consider chucking a few digital pennies our way by clicking on this link. Thanks!