Got high expectations? Got a little US flag to wave? Got a pair of devil horns in each hand? Then you’re now ready to watch the new trailer for Captain America: The First Avenger. Rawwwk!.


After Thor thrilled and Green Lantern grated, all eyes are on Cap America to see if 2011 is remembered for being a good or bad year for comic-book adaptations, and thankfully this new trailer doesn’t disappoint. Even if it does come with an out-of-place rock riff throughout (*prepares a fight circle*).

We’ve got a lot more of bobble-head Chris Evans, who, in this post-Lantern time, looks more and more realistic, and we’ve also got a ton more action than in the last trailer. In fact, I don’t want to say it, but Captain America is starting to look like it might be the best pre-Avengers Avenger film overall. Shit, I just said that didn’t I? Right, I’m sticking to my guns no matter what now. This will be the most amazeballs film evah. Check it:

Cool, right? Ok, the Tool soundtrack doesn’t quite fit the on-screen tone, but that’s just Marvel studios saying “Lookee! We rock!” and who can blame them. Also, the shrill refrains of Vera Lynn would probably deter a younger audience.

That’s not all though – we also have this new retro-looking poster for the film, which seems to prove that Cap America’s super-soldier serum gives him a near owl-like ability to twist his neck without breaking it. 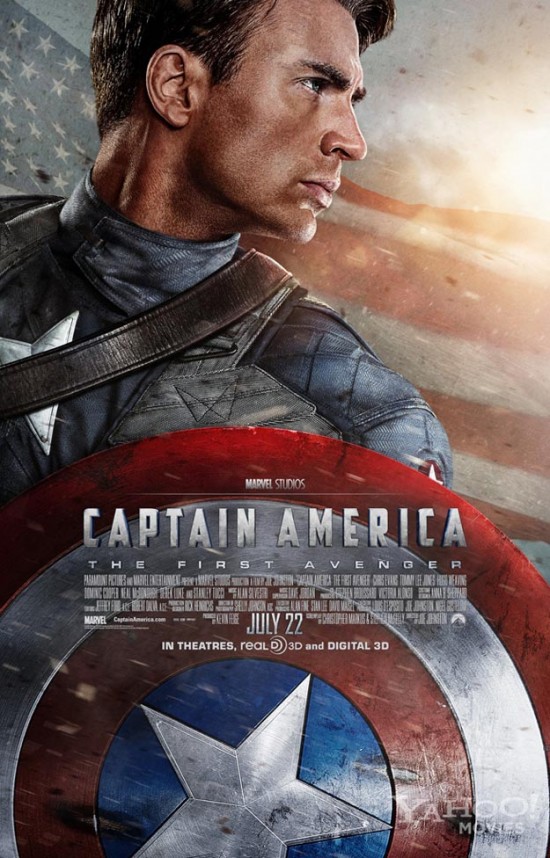 More:  Captain America The First Avenger  Marvel  Chris Evans  The Avengers
Follow us on Twitter @The_Shiznit for more fun features, film reviews and occasional commentary on what the best type of crisps are.
We are using Patreon to cover our hosting fees. So please consider chucking a few digital pennies our way by clicking on this link. Thanks!