Here's the trailer and poster for new frat-pack comedy Dinner For Schmucks. Paul Rudd and Steve Carell are in it. That's enough.

Don't worry, I hadn't heard of it either before today, but then Rudd and Carell churn out these comedies every couple of days it seems. The formula goes: get a ridiculous concept, hire Rudd, Carell, Rogen, Segel, Vaughn or Ferrell, let them do what they want in front of the camera. Works every time.

The ridiculous concept in this case? Here comes the synopsisy bit:

"
"
The only thing standing between Tim (Paul Rudd) and total career success is finding the perfect guest to bring to his boss' annual Dinner for Extraordinary People, an event where the winner of the evening brings the most eccentric character as his guest. Enter Barry (Steve Carell), a guy with a passion for dressing mice up in tiny outfits to recreate great works of art.
It looks funny enough. Steve Carell plays a character that's more Brick from Anchorman than Michael Scott from The Office, and Paul Rudd just plays Paul Rudd. And I wouldn't have him any other way. [I'd have him every way imaginable - Ed]

Throw in Zach Galifianakis in a wacky role, Ron Livingston for some Swingers cred and, yes, I believe I spotted Mel from Flight Of The Conchords in there too. Sold. 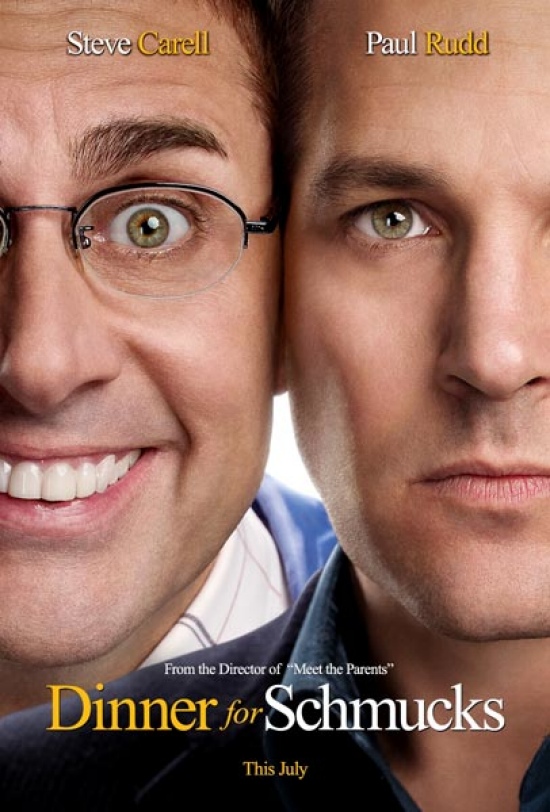 More:  Dinner For Schmucks  Paul Rudd  Steve Carell
Follow us on Twitter @The_Shiznit for more fun features, film reviews and occasional commentary on what the best type of crisps are.
We are using Patreon to cover our hosting fees. So please consider chucking a few digital pennies our way by clicking on this link. Thanks!