So is this still about vampires, or...?

The trailer for Twilight: Breaking Dawn has been released, and you've been invited to the fictional wedding of the year! Then, later that night... The honeymoon begins. Bow-chicka-chicka...


The first trailer for The Twilight Saga - Breaking Dawn: Part I - from now on I'm going to be calling it TTSBDPI for short - has hit the webs and, as usual, it provides as many accidental LOLs for da haterz as it does SQUEEs for the Twi-hards. Go on, indulge yourself.

Obviously you've read the book and are familiar with all the intricacies of the plot, so you already know Breaking Dawn starts with the wedding of Bella and Edward. It's something Twilight dribblers have been waiting four movies to see, but obviously it's not that visually exciting, so the trailer has it cut to a soundtrack of monks doing some hardcore chanting. Suspenseful.

Franchise joke Taylor Lautner has approximately five seconds of trailer time before he takes his shirt off in the rain - maybe the invite has a no-shirts dress code for ethnic werewolves. It looks like he's too late to stop the inter-species boning of the century though, with Edward finally getting to have a go of sex on a lady and breaking the bed in the process. Ha, n00b. 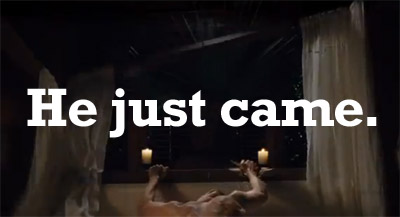 But does it sparkle?


The trailer ends with Bella feeling her baby bump (because SEX gets you PREGNANT IMMEDIATELY kids) or possibly just working through the remnants of the previous night's lamb bhuna. A more puerile movie blog would insert a reference to farting on a picture caption, but not me - I'll let you do that yourselves. 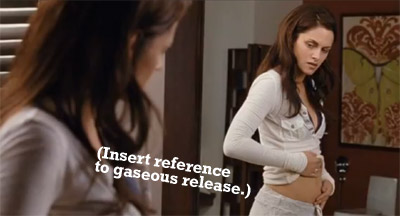 It's just a teaser so there's not much given away in terms of plot, but I'm not mistaken in thinking the Twilight saga is supposed to be about vampires, right? With every new movie, there seems to be less and less actual vamping. According to TTSBDPI, being a vampire now mainly consists of clumsily shoulder barging people into picture frames and getting chicks up the duff with your super sperm. Which is sort of cool, but not in quite the same way it used to be. 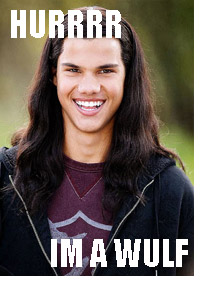 More:  Twilight  Twilight Breaking Dawn  Robert Pattinson  Kristen Stewart  Taylor Lautner
Follow us on Twitter @The_Shiznit for more fun features, film reviews and occasional commentary on what the best type of crisps are.
We are using Patreon to cover our hosting fees. So please consider chucking a few digital pennies our way by clicking on this link. Thanks!