Or maybe it's Tracy Morgan and Bruce Willis in Kevin Smith's Cop Out, previous titled A Couple Of Dicks. Whatever. (*skim-reads press release, sucks nacho dust off fingers*). 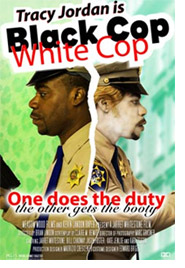 Life imitating art is always funny, but not always in the way it's intended to be. Take this trailer for Kevin Smith's Cop Out. Any 30 Rock fans - and really that should be all of you - might well confuse it with one of Tracy Morgan's meta-fictional character Tracy Jordan's 'joke' movies, Black Cop, White Cop. Coming in summer 2010: Honky Grandma Be Trippin'.

So what we have here is basically Generic Buddy Cop Comedy #438. Even the title is bland. It was picked as an alternative to the original title, A Couple Of Dicks (fnar), but was subtly changed to a less-offensive in-joke to all eight people who follow Smith's increasingly futile battles with the studios.

I love Kevin Smith movies like Kevin Smith loves hot pockets, but in the nicest possible way, it seems like a lot of them have an age-enjoyment limit on them. Clerks, Mallrats, Chasing Amy, Dogma and Jay & Silent Bob were all great fun, but it's become painfully apparent in recent years that Smith hasn't matured a day. Today's teens probably still love him, but his ship has sailed from my port.

Still, Cop Out isn't actually written by Smith himself - it's his first sole directorial credit, in fact - so thankfully we've probably been spared a scene in which Bruce Willis and Tracy Morgan compare penis size in the bathroom. Probably.

More:  Cop Out  A Couple Of Dicks  Kevin Smith  Bruce Willis  Tracy Morgan
Follow us on Twitter @The_Shiznit for more fun features, film reviews and occasional commentary on what the best type of crisps are.
We are using Patreon to cover our hosting fees. So please consider chucking a few digital pennies our way by clicking on this link. Thanks!