Unsurprisingly, given that it's from the director of the Resident Evil franchise, historical accuracy is not high on the agenda. Sword-sporting gimps and giant airships on the other hand? YO.


Paul WS Anderson's take on The Three Musketeers will probably be no better or worse than any of the other two dozen versions that have been released in the last century, although it has one thing that the others didn't: Milla Jovovich doing a slow-motion limbo-dive through a corridor of ye olde ball-bearing traps. Take that, Alexandre Dumbass.

To be fair, ridiculous action set-pieces (SHOT IN 3D, in case you didn't notice) and oversized weaponry are par from the course in Andersonville, and this version has a pretty impressive cast on paper at least. It stars Matthew MacFadyen, Ray Stevenson and Luke Evans as the Musketeers, Percy Jackson twerp Logan Lerman as Dogtanian and - get this - Christoph Waltz, Mads Mikkelsen AND an effete Orlando Bloom as a triumvirate of villains. If they're not bad guys you can boo and hiss at, we're in trouble.

Of course, it's nothing compared to the 1993 version of The Three Musketeers, starring... Well, see for yourself. 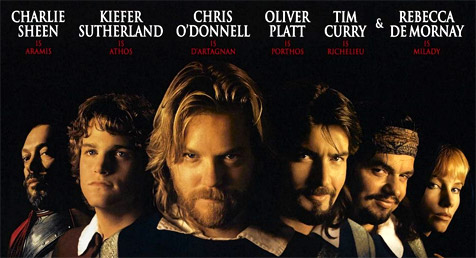 Never forget.
More:  The Three Musketeers  Matthew Macfadyen  Ray Stevenson  Luke Evans  Logan Lerman  Orlando Bloom  Paul WS Anderson  Milla Jovovich  Christoph Waltz
Follow us on Twitter @The_Shiznit for more fun features, film reviews and occasional commentary on what the best type of crisps are.
We are using Patreon to cover our hosting fees. So please consider chucking a few digital pennies our way by clicking on this link. Thanks!