Revenge Of The Fallen be damned: I'm going to stop pretending I'm not excited about Transformers 3. IT HAS A GIANT ROBOT SNAKE IN IT. How could it possibly fail?


I just got back from a holiday to Rome, which was lovely, but the last thing I saw on Twitter before I departed to the land of no roaming internet access was the arrival of a new Transformers 3 trailer. So, while I got to see the wonders of the Colosseum and the Imperial Fora and St Peter's Basilica, what I really wanted to see was Optimus Prime slicing and dicing dispensable robot aliens with his giant phallic glowing sword. Stupid Rome.

Obviously the wounds of Revenge Of The Fallen have yet to heal fully (although I still maintain it's kind of fun, in spite of its epic dumbness), but I think it's safe to say that lessons have been learned for Transformers: Dark Of The Moon. You can tell because all the action scenes have been slowed to a crawl for the trailer so you can actually see what's going on. What next: a relatable female character? A plot? PAH. Enjoy.

Looks pretty nuts, not only in the action stakes but also in the Frances McDormand talking to a giant alien robot stakes. I'd also like to point out that, despite comments in a previous article, Shia LaBeouf was definitely not on cocaine when he was making this movie. 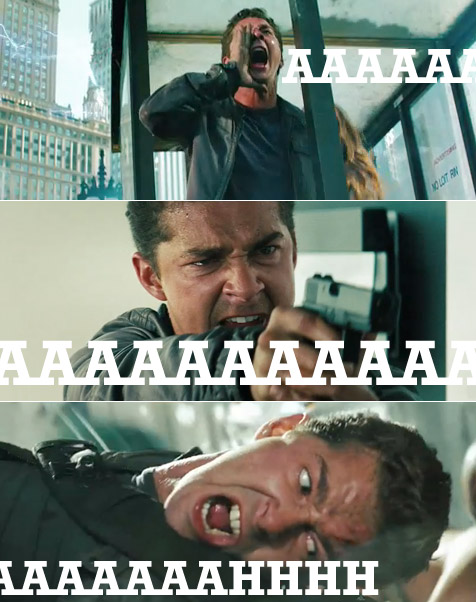 And this was before he even visited wardrobe.
More:  Transformers Dark Of The Moon  Transformers 3  Transformers  Shia LaBeouf  Michael Bay  Frances McDormand
Follow us on Twitter @The_Shiznit for more fun features, film reviews and occasional commentary on what the best type of crisps are.
We are using Patreon to cover our hosting fees. So please consider chucking a few digital pennies our way by clicking on this link. Thanks!