Drive Angry is out this week, which is the perfect excuse to collate absolutely EVERYTHING we know about Nicolas Cage in one glorious portfolio. This'll be the last Cage thing we do... this week.


If you've been here longer than a week, you may have realised we have something of an obsession with Nicolas Cage and his freaky ouevre. It's a sickness, frankly, and this list of 101 reasons why you should love him too is a form of therapy. 100 of them are genuine, one of them is a fake - a curveball, tossed in to unnerve you. However, all of them are 100% awesome, just like Nicolas Cage himself. Pray at his shrine.
The man, the name, the hero

1. Nicolas Cage changed his name from Coppola so people wouldn't hire him off the back of his famous family, which includes Oscar-winning uncle Francis Ford and grandfather Carmine.

3. Nicolas took on the stage name Cage because his favourite comic-book hero was Luke Cage.

4. Nicolas Cage really, really loves superhero comic-books. In 2003, he sold his comic collection for $1.68 million, including his copy of Action Comics issue #1, the first ever appearance of Superman.

5. In 2005, Nicolas Cage named his newborn son Kal-El Coppola Cage, in honour of his Kryptonian hero...

6. Apparently, the thought of naming his son Luke never occured to him. 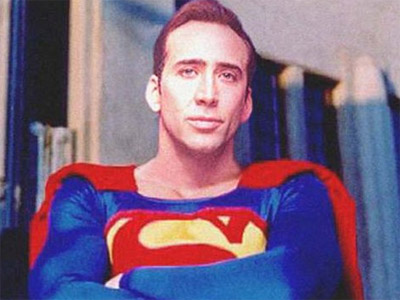 8. Nicolas Cage is something of a hoarder. Among his collection of odds and sods are rare stuffed birds, lizards, snakes and an octopus.

9. It's also been claimed that Nicolas Cage at one point owned stuffed pygmy heads, which are illegal and really fucking weird.

11. Nicolas Cage owns a pyramid tomb in which he plans to be buried. 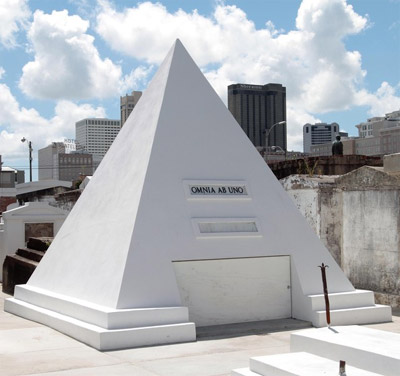 Have you bought YOUR tomb yet?


12. Nicolas Cage owned a $300k Lamborghini that was confiscated from the Shah of Iran. Because where else is he going to get one?

13. Nicolas Cage also owned 18 motorbikes and around 50 cars. Either he's gone method for a sequel to Gone In 60 Seconds, or he's Batman.

17. Nicolas Cage lived in a fake castle outside Los Angeles and toyed with the idea of importing a real one from overseas, before deciding to leave such behaviour to supervillains and the mentally ill.

19. Nicolas Cage owned a quaint house in Bath, England and says he loved to spend a "Dickensian Christmas" there. He turned on the Bath Christmas lights in 2009 while cackling like a madman. 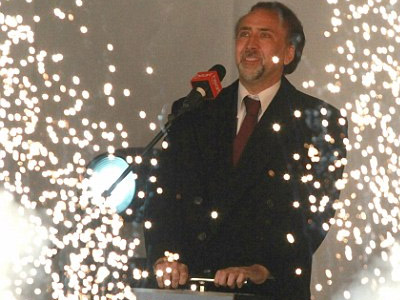 22. Nicolas Cage has a tattoo of Woody Woodpecker on his right bicep.

23. Nicolas Cage has a tattoo of a monitor lizard wearing a top hat. 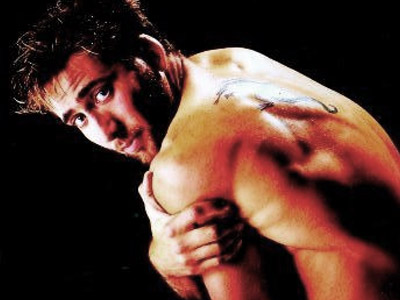 25. This one time, Nicolas Cage totally shared a cigarette with a lizard.

27. Nicolas Cage ate a live cockroach three times for Vampire's Kiss, after insisting the script was changed from eating a raw egg.

28. Nicolas Cage wanted to play the villain in The Green Hornet with a Jamaican accent. I have absolutely no problem with that.

29. In order to work up the correct levels of rage when shooting The Cotton Club, Nicolas Cage smashed up a street vendor's remote-controlled car, which is kind of a dick move for anyone who isn't Nicolas Cage.

30. Nicolas Cage pulled off a flawless, hilarious Adam West accent for his role in Kick-Ass. Said director Matthew Vaughn: "The first day around, I'm thinking, 'This guy can't act!' I started freaking out."

31. Nicolas Cage allegedly hired a witch doctor to uncurse the set of The Sorcerer's Apprentice. Bet you he had one on speed-dial. 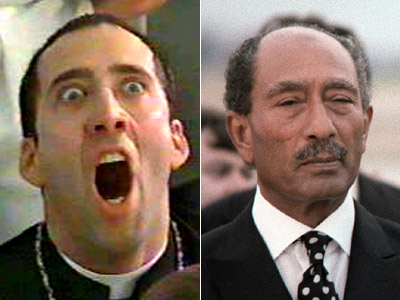 
33. Nicolas Cage couldn't tell the Oxide brothers apart while shooting Bangkok Dangerous in Thailand and was convinced he was either hallucinating or was poisoned.

34. Nicolas Cage bought a $276,000 dinosaur skull after a frenzied auction with Leonardo DiCaprio. Everything about this is amazing.

36. Nicolas Cage claims he convinced Johnny Depp to move into acting: "I said, 'I really think you are an actor, that you have that ability.' That was just from playing one game of Monopoly with him."

37. Nicolas Cage used to take magic mushrooms with his cat, Lewis. "He ate them voraciously," he told David Letterman. "I had no doubt that he was my brother."

38. Nicolas Cage used to stalk his neighbourhood as a child. "I would call myself 'The Spirit' and I had a white T-shirt with a black 'S' on it. I strapped a boomerang to my chest and I would prowl the alley at the back of my house between one and two in the morning." 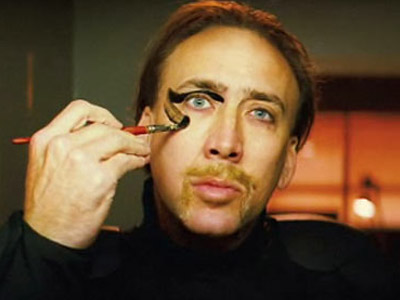 
39. Speaking in 2010, Nicolas Cage claimed, "I find that now I'm interested in making less violent films." Later that year, he released Kick-Ass (in which he shoots his teenage daughter in the chest) and Bad Lieutenant (in which he threatens an old lady with a gun).

40. Then he filmed Drive Angry, in which he shoots a room full of men while fucking a barmaid and smoking a cigar.

42. Nicolas Cage proposed to Patricia Arquette on the first day he met her. Freaked out, she made him a list of impossible demands to get rid of him. Which he met. The list included...

47. You're damn right she married him.

49. Nicolas Cage liked Elvis so much, he married Presley's daughter, Lisa-Marie. Sadly, they divorced after 20 months. That's right, the woman who married Michael Jackson thought Nicolas Cage was too weird.

50. Nicolas Cage is not just a star-fucker: he propositioned his new wife, Alice, when she was a 20 year-old sushi waitress.

51. Nicolas Cage has a 20 year-old son called Weston, who is the lead vocalist in a black metal band called Eyes Of Noctum. (*throws up rock horns, splits girl's lip*) 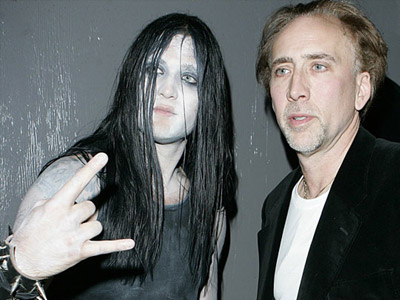 Ghost Rider had found his next demon to slay.
More:  Nicolas Cage  Drive Angry
Follow us on Twitter @The_Shiznit for more fun features, film reviews and occasional commentary on what the best type of crisps are.
We are using Patreon to cover our hosting fees. So please consider chucking a few digital pennies our way by clicking on this link. Thanks!
Next Page »