A Japanese lesson for Aaron Sorkin

He can dash off ten pages of clever, snappy, Oscar-winning dialogue in about three minutes, but when it comes to the basics of Japanese grammar? Very poor, Sorkin. See me.


The Newsroom reminds me of the best elements of The West Wing: the idealism in how an American institution could be run, and of course the signature Aaron Sorkin dialogue.

It seems the only way he could think of to get actors to rattle off his words any quicker than usual was to do a chunk of them in Japanese, and so in episode 6, 'Bullies', we saw Olivia Munn's character, Sloan Sabbith, ask TEPCO spokesman Daisuke Tanaka in Japanese for a quote on the status of the Fukushima reactor. He admitted to her off the record that it could potentially rise to radiation level 7, but then wouldn't admit it on air, prompting her to lose her rag and announce it anyway.

Later on Charlie came up with a way for her to keep her job and the spokesman to save face: the Japanese words for four ("shi") and seven ("shichi") sounded very similiar, he said, and all she need do was put out a statement saying she'd confused the two. 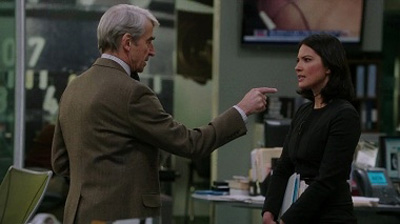 But Sorkin, you BELL-END, here's the problem: as Sloan points out, there is another word for each number ("yon" and "nana" respectively). What she doesn't mention is that a native Japanese speaker would never use "shi" or "shichi" in relation to a unit, like centimetres, kilograms or a radiation level: they'd always say "level yon" or "level nana". It's like the difference in English between "oh" and "zero": you'd never say radiation was at "level oh".

So (a) Tanaka would never have said "shi" or "shichi" (we don't hear that part of the conversation, but Sloan doesn't correct Charlie's presumption that he did) and (b) no Japanese person is going to believe Sloan's cover story, which means THE WHOLE THING FALLS APART.

I mean, for fuck's sake, Sorkin, everyone knows that. Now write it out a hundred times.

Oh, but first, could you write more episodes of The Newsroom please? It's brilliant. Sorry to bother you.

More:  Aaron Sorkin  The Newsroom  Olivia Munn  HBO  Sky Atlantic
Follow us on Twitter @The_Shiznit for more fun features, film reviews and occasional commentary on what the best type of crisps are.
We are using Patreon to cover our hosting fees. So please consider chucking a few digital pennies our way by clicking on this link. Thanks!