Here's the last in my series of interviews for The A-Team, director Joe Carnahan. He wasn't in District 9, didn't sound like he wanted to punch me and I don't fancy him, but he was still cool.

Joe was actually one of the first of the A-Team guys that I spoke to, and I couldn't have been happier with how the interview went. I barely had to poke him about a subject and he'd rattle off anecdote after anecdote - what you see here is probably only about half of our conversation. We also spent a while talking about football (he's a Man United fan, I couldn't resist rubbing it in) and the forthcoming World Cup game between England and the USA. He made me feel at ease, and for that, he gets a gold star. 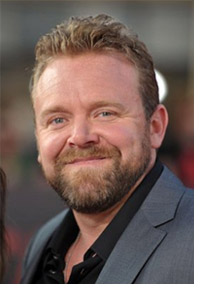 : Hey Joe. Where are you right now?

Joe Carnahan: I was about to depart for Cannes, which will not be happening through fear that the volcanic ash cloud will force me to stay in this country. I'm literally at the climax of the movie, what I'm mixing right now, and it's just, like, the hardest reel of the movie. Rather than chase topless starlets down the Croisette, I think I'm going to have to skip out and stay here and finish my work.

JC: My fiancée would not think so, but I still have to struggle with it. [laughs]

: Tell me about the state of The A-Team when you came on board.

JC: I never pretend to have the answers for this particular franchise, but I think that coming from the background of not being part of the fanboys, the legions of huge A-Team fans, probably helped me, actually. I remember as a kid, I was a huge Miami Vice fan, because it had that kind of grit and darkness and that was what thrilled me.

But I remember at the time, I was a real fan of the culture of The A-Team, those four guys were so charming and had such a kind of loyal following that it endeared itself to you regardless of whether you liked it or not. It just had that charm, it was one of those things of the moment, you know? Obviously to this day it resonates for a lot of people.

When I went in, for lack of a better word, it was a mess. There's a writer whose name I shall not mention, who I think took a lot of money and did very little work and so it was a mess. I thought they had kept the camp and the kind of tongue-in-cheek nature of the show and kind of torpedo'ed the dramatic possibilities for that, and I think did it a huge disservice.

You look at the successful franchises over the last couple of years, the ones that have been reinvented. Look what Chris Nolan had to overcome with the last incarnations of the Batman films, which were like gay camp, compared to what he did with them. And then what JJ did with Star Trek. Again, there's a whole history there with films, some quite good, Wrath Of Khan is a really good film, they were able to, inspite of that, really carve out the defining vision for those series.

When I was looking at The A-Team, I thought what's sacrosanct - what's the stuff I'm gonna get killed if I don't doff my hat to, and we identified those things. It was great, because Alex Young, who was the president of production at the time and went on to become a producer, was really instrumental on the whole thing. He and I had a couple of conversations, Bryan Bloom, my writing partner, and I submitted a four page outline and everything just moved from there.

For me it was keeping those four guys the centrifugal force on this thing and not getting too far afield, making sure that those four guys are people that you're gonna love immediately. It was a really quick process. All things being equal, it moved pretty quickly from start to finish.

: Were there any movies that influenced your take on The A-Team? What about your aborted work on Mission Impossible 3?

I found that for all of the potential hazards that we may have encountered with the studio, they were hands down some of the best creative partners I've ever had. As much as we knocked each other around and I wanted to choke everybody to death, it was just persevering and staying with it and understanding we're making something everybody was really happy with. We're making something really good.

I didn't fold a lot over of MI3 other than being able to observe what to do and more importantly, what not to do in a big movie like that. I tried to cut those things off as I saw them coming. Invariably you just end up spending a lot of money, and a lot of resources on something that doesn't make it to the screen. I think hopefully we've mitigated that stuff and that the movie feels gigantic, it costs... I'm not going to say it wasn't expensive, it was, but it wasn't a $200 million movie. But it looks like it, it feels like it.

: Did you ever consider [close personal friend] Tom Cruise for any of the roles? Say, maybe Hannibal?

JC: Tom is so kind of singular in what he does, if you make that movie it becomes Tom Cruise and his three assistants. You know what I mean? It's not The A-Team. It's not a collection of these guys who, by themselves are less interesting than the whole - and I don't mean that in any way disparagingly towards Bradley or Liam, I love those guys to death. I mean if you just make a movie about Face, knowing what that character is, it just feels like some guys are missing from the party, you know what I mean?

In the same way, if you just made a movie about D'Artagnan: it's not the Musketeers, man. It's just one of 'em. If you really threw a huge star at that Hannibal role... I'd say the same thing about Bruce Willis. I love Bruce Willis, but it would have been, 'There's John McClane. But he's called Hannibal in this movie'. It's not nearly as interesting or inspired as Liam Neeson. 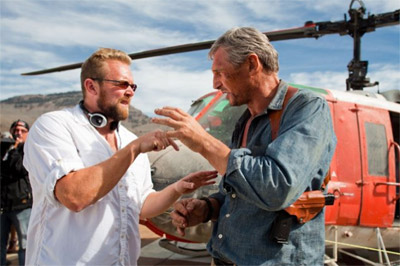 : It sounds like you wanted names, but not big names. Mel Gibson, Jim Carrey and Chris Pine were all rumoured. Did you want to take some fresh new guys and take them out of their comfort zone?

JC: You hit it right on the head man, that's exactly what I'm trying to do. I take a real active hand in casting. Sometimes in these sorts of situations, if you can just alter the audiences' experiences by degrees, it's the difference between them buying into something and dismissing it in the first 30 seconds. With all due respect to George Peppard, he ain't Liam Neeson. That was a very tongue in cheek, cartoonish portrayal of Hannibal Smith.

This isn't to diminish anyone's childhood memories, but this is not that Hannibal Smith. He'll punch a hole in your chest. You look at Liam in Taken, that's a serious physical presence. That's what he is. He's just immediately paternal; when you're with that guy you feel like he's your dad. As Liam gets older, he's just going to get more interesting. He's just going to get exponenitally better at what he does, which is already remarkable.

He's already kind of a titan in the acting world, he just brought that thing that you can't manufacture. If I'd have put a comedian in that role from a comedic background, it wouldn't have had the same import. Ridley and Tony Scott are producing this thing, I can't put... Adam Sandler's not gonna play Hannibal Smith. You are making a statement with Liam Neeson, as much as you are with Sharlto, with Bradley, with Rampage. Those are the four guys I wanted, those are the four guys I got.

More:  The A-Team  Joe Carnahan  Interview
Follow us on Twitter @The_Shiznit for more fun features, film reviews and occasional commentary on what the best type of crisps are.
We are using Patreon to cover our hosting fees. So please consider chucking a few digital pennies our way by clicking on this link. Thanks!
Next Page »