Touching scenes online this week, as the cast members of Marvel's Guardians Of The Galaxy series banded together in a show of support for fired director James Gunn, by co-signing a letter that almost but not quite called for his reinstatement. Gunn, a former Troma filmmaker and purveyor of questionable humour, was fired by Disney after a bunch of right-wing lunatics, led by lisping dong Mike Cernovich, dredged up a bunch of offensive ten year-old tweets and weaponised their fake outrage in order to punish the director for his outspoken liberal views. It’s all very 2018, but let’s focus on the real issue here: MOVIE STAR SIGNATURES!


This must be what it feels like to be an autograph hunter. What a rush! Look at these perfectly formed signatures, all iconic and everything. There is an unspoken rule when you become a celebrity that says you don't have to write your name like a normal person anymore, you can go as aggressive or as bonkers or as obnoxious as you like. Your face is your signature now, and your IMDB profile is your PIN number. 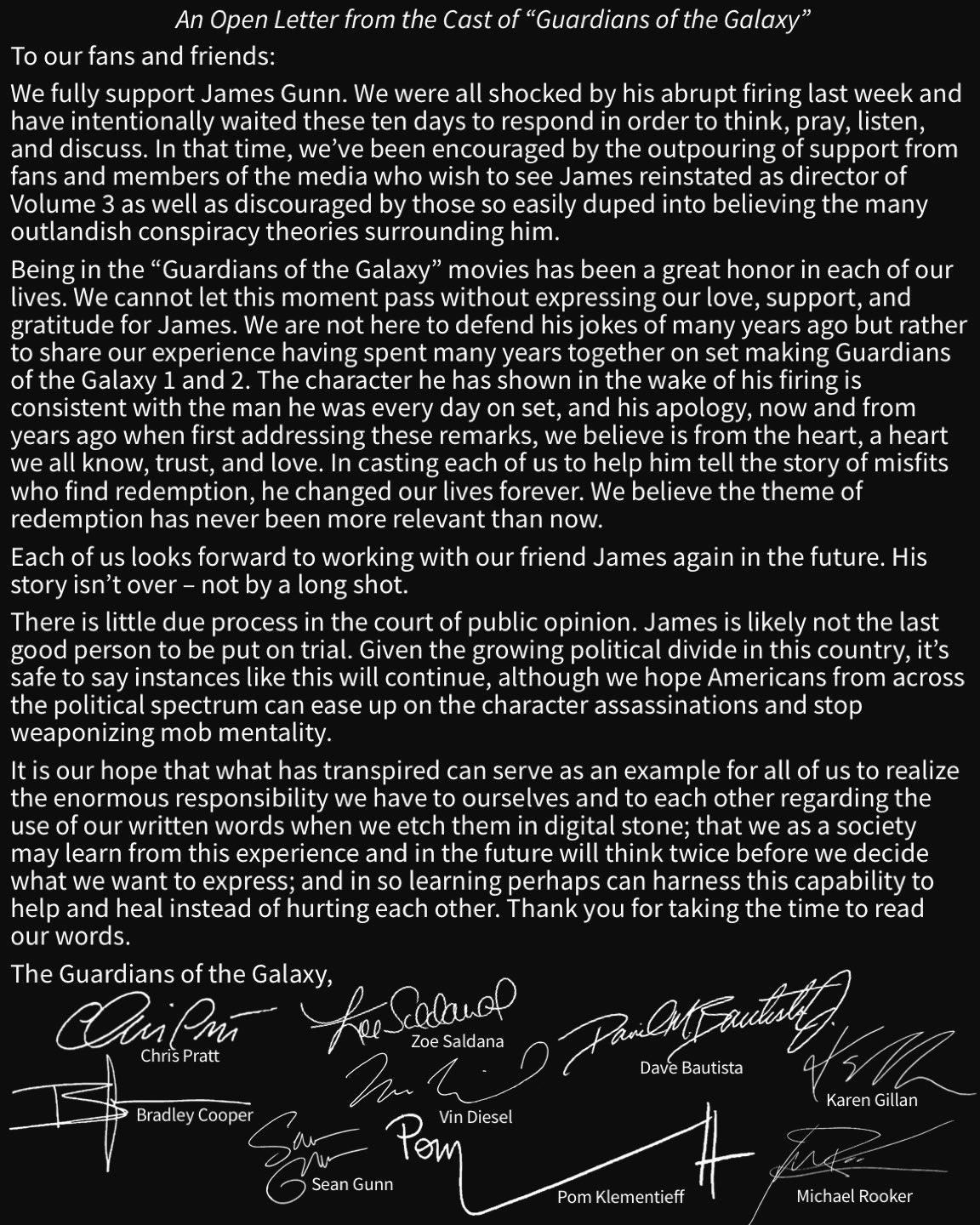 Touching, I'm sure you'll agree. "So did you quit?" "Almost bloody did, mate. Almost bloody did." Let's analyse each movie star signature on the letter using psychology and graphology and behavioural science, or what I assume those things to be. Come on, it'll be fun!
Chris Pratt

Oh, that is a nice signature. That is some quality penmanship right there. I have to say, from someone like Chris Pratt, I didn't expect his signature to be quite so curly. I was expecting edge, or something stupid at the end like a smiley or a winky face emoji or an American flag. Or just PRATT in all caps. You've surprised me, Chris Pratt. Maybe I had you wrong all along.
Bradley Cooper

Clearly, Bradley Cooper stopped giving a shit about his signature years ago. This is the signature of a man who has not had a practical reason to write his name, with a pen, on paper, in several decades. It's a signature that says "Do I really need to be doing this? I mean, just look at me. I'm Bradley Cooper for Christ's sake!" And then his voice gets a little high and that's his PA's cue to step in and take over. I feel you, man. Over the years, thanks to Chip & Pin and Contactless payments, my signature got more and more lazy, the letters flattening out into a squiggle, until HSBC requested that I replicated my signature against the one I had on file to prove my identity, and it turns out the one they had stored was from when I opened my account aged 16, when I apparently cared about each and every letter in my name. Anyway, to cut a long story short, they wouldn't give me my money. This probably doesn't happen very often to Bradley Cooper.
Dave Bautista

You traded on your physicality at the start of your career, which was smart, and wrestling is a good foundation to build on. The fans loved Bautista, but if you were going to be taken seriously in Hollywood, you needed to be a name - and if The Rock can teach fans to call him Dwayne, then you can be anything. You're a sensitive soul in a thuggish body - a brute with the soul of a poet. You never went by Dave - your Mom called you David. Will the fans ever truly know David M. Bautista, the man behind the man, the real you? You'll keep signing those autographs until they do. Then some intern types up the cast names for James Gunn's letter and credits you as 'Dave' and honestly, fuck everything.
Zoe Saldana

It says 'sign here on the line'. It didn't say 'sign here diagonally'. Show some respect. I can't deal with the line through the 'Z', that's a totally extraneous bit of signature - why are you making 'Z' harder for yourself, Zoe? It's the first letter of your name, stop adding bits to it that don't exist! You are 'Zoe Saldana', not 'Ƶoe $aldana'!
Sean Gunn

Nice. Real nice. Recognisable initials you could pick out of a lineup. A pleasing symmetry we've not seen in a name since the likes of Sean Bean. It's playful, it's arty, it's dependable. It's almost enough to distract you from the fact that this letter of support from James Gunn's cast contains a signature from his own brother. That doesn't count. Family is a given. Stop bumping up the numbers, Gunn family.
Pom Klementieff

Mad as shit. Starts off promising, like a more palatable Comic Sans, the kind of font you'd use to write the tagline of a romcom, but then whooooahhhhhhh things really take a turn. Who showboats like this in their signature? It's a cry for help. The tail on the 'm' has got longer and longer and longer as Pom has become more and more famous, and no one has had the balls to tell her to cut it out. Who can even remember what this stupid letter was even about? It's all about Pom now. Pom Pom Pom Pom Pom. Also, I'm sorry, but that's an 'H'. Stop gaslighting me, Pom.
Michael Rooker

Even if signatures weren't made up of interconnected letters that formed words, and I could somehow look at this signature divorced of its meaning, I would still be able to pin this on Michael Rooker. It's the kind of signature a madman would scrawl in a hurry while escaping from the police. It's the kind of signature you'd see carved into a torso. It forgoes form and function and is instead an abstract expression of Michael Rooker's inner torment, and from the looks of it, it is pretty fucking dark up in there. Those two dots are eyes, windows into Michael Rooker's soul, and they are screaming.
Karen Gillan

Fuck off, I'm not having this.
Vin Diesel

What percentage of Vin Diesel do you think thought it would be a good idea to write 'I AM GROOT' as his signature on this letter. 60%? Higher? I'm almost certain he had to be talked out of it. I must say, I pictured Vin Diesel's signature as being very different from what we get here; the one I imagined, and I've thought about it a lot, had more 'X's in it for starters. It's less masculine than I would have imagined for a man who named himself after wine and petrol. You've got to love a man who dots an 'i' without writing an actual identifiable 'i'.

More:  Guardians Of The Galaxy  Marvel  James Gunn  Chris Pratt  Dave Bautista  Zoe Saldana  Bradley Cooper  Vin Diese  Analysis
Follow us on Twitter @The_Shiznit for more fun features, film reviews and occasional commentary on what the best type of crisps are.
We are using Patreon to cover our hosting fees. So please consider chucking a few digital pennies our way by clicking on this link. Thanks!