A two-minute Superbowl halftime TV spot for Chrysler featuring Clint Eastwood seems to have all of America hugging each other, putting up flags and volunteering to go off and fight baseless imperialist wars, just like in the good ol' days just after 9/11. At this point, even I'm prepared to admit that TV's influence is getting a little out of control.


I read an article on the Huffington Post today by one Phil Cooke, Ph.D., entitled 'What Leaders Could Learn From Clint Eastwood's "Halftime in America" Commercial'.

The advert in question was this, for Chrysler.

Stirring stuff, certainly, and one of those brilliant pieces of advertising that gets people talking without really mentioning that there's a product behind it. It has apparently sparked a huge outpouring of emotion in the States, tugging at your average Joe Six-pack's sense of nationhood and community, and imploring him to help his fellow man in tough times. Though stopping short of suggesting public healthcare might not be an evil Communist plot, obviously.

According to Phil Cooke:

"
"
It's about aspiration. Ultimately, the spot wasn't created to assign blame, wallow in our troubles, or discuss what did or didn't work. It wasn't a high minded lecture. Its purpose was to inspire us to be great again.
It wasn't, though, was it, Phil? 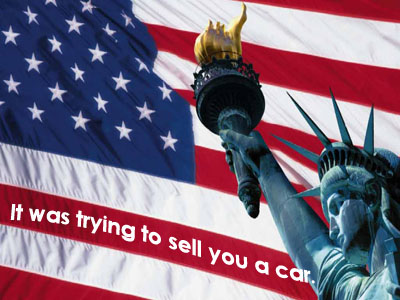 That's the thing, you see. Adverts can be entertaining, funny, inspiring even. But they aren't intended to do any more than make you buy a shiny object. They're not trying to do you a favour.

Getting swept up in national events, losing your cynicism and swelling with patriotism is no more an American trait than it is a British one - people over here were blubbing over the John Lewis advert at Christmas too - but when adverts are as well-written, directed and even acted as they are today, it's too easy to forget the words of the granddaddy of advertising himself. 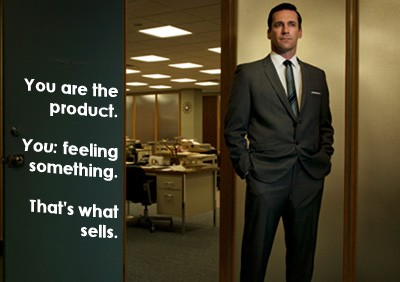 Somewhere, an 85-year-old Don Draper is laughing his ass off. And smoking.

More:  Clint Eastwood  Adverts  Jon Hamm
Follow us on Twitter @The_Shiznit for more fun features, film reviews and occasional commentary on what the best type of crisps are.
We are using Patreon to cover our hosting fees. So please consider chucking a few digital pennies our way by clicking on this link. Thanks!