Been a while since I checked on John Travolta, I wonder what he-OH MY GOD

I like to check in on John Travolta from time to time like an elderly relative, just to make sure he's still getting by and that he hasn’t soiled himself or been conned out of his gas money by scammers. Imagine my surprise, then, to discover that not only is 2018 John Travolta doing okay, he's positively THRIVING as the star of Speed Kills, a new feature film/cinematic VR extravaganza! No popping to the shops for milk on your behalf, JT!


Time was, Nicolas Cage provided the lols around these parts - he was the formerly great actor who was incapable of turning down roles in shitty straight-to-video potboilers. But even his darkest moments, at the bottom of that huge financial hole he found himself in, he managed to Nicolas Cage himself out again, through sheer force of weird. Now we've switched, and it's Travolta at the bottom of the hole, making movies about John Gotti and speedboat champions while his bank manager stands off camera with his arms crossed. They've only bloody Face/Offed again.

The last time I checked in on John Travolta, he had lent his voice to an animated movie about a Gummi Bear, then was involved in legal action to get out of it - perhaps par for the course for a man who was once paid "a seven-figure gift" to not make the Dallas movie. Then there was Gotti, a gangster biopic so universally ridiculed the critical mauling it received was referenced in its marketing (actual trailer quote: "Audiences loved Gotti... Critics put out the hit... Who Would You Trust More? Yourself or a Troll Behind a Keyboard?"). You'd forgive Travolta if he quietly retired to fly his massive planes around his massive mansion wearing his stupid pilot clothes. 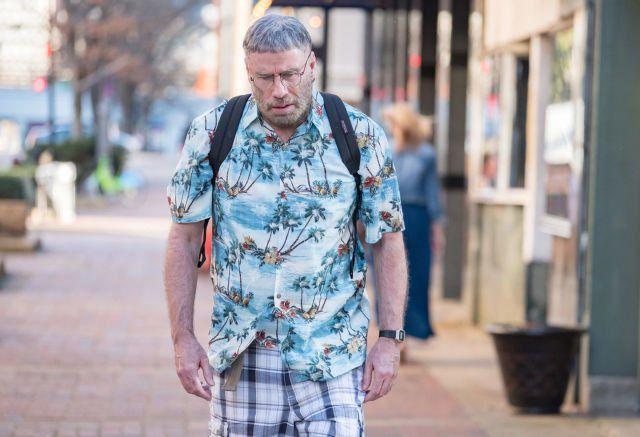 Or any stupid clothes.


Nevertheless, he persisted. And thank goodness he did. For starters, we'd have never got this photo of him with this haircut in the new movie by Fred Durst. We'd have never got the movie Trading Paint where he plays a race car driver named "Derek Bornt". And we'd never have got Speed Kills, an experience that can genuinely be referred to as a multimedia extravaganza. Here is the trailer, try not to be turned off by the thumbnail that makes John Travolta look like a half-melted guy on Bonfire night.

Speed Kills - a title that practically begs to be sung to the tune of 'Love Hurts' - is pretty much par for the course at this stage in Travolta's career. He plays a powerful businessman, in this case a speedboat salesman, who gets in with the wrong crowd and ends up in debt with the Mob and investigated by the FBI and yada yada yada. You get it. To be honest, if I had to shift cocaine across Miami, speedboat would not be my preferred method of transportation. In fact, you couldn't pick a worse vehicle to use - an open-top, high-speed, water-based vehicle with no stability whatsoever. Just do it by car and stop showing off.

Anyhoo, Travolta is there, just sort of existing in front of the camera, doing what he does best: pulling a half-smile half-grimace like he's just been told a racist joke, gamely attempting a sort-of dance in a nondescript nightclub while girls half his age mack all up on him like he's a sexy old waxwork. The movie is not what caught my attention. Oh no. I'm here for SPEED KILLS: THE VR EXPERIENCE. You've never experienced John Travolta's acting until you've experienced it virtually!

Now on the surface of it, this seems like a smart move. VR is undoubtedly going to play some part in the future of cinema, and as soon as someone like James Cameron gets his head round it the rest of Hollywood will catch up. For now though, VR is still in its infancy, and as such, all VR "cinematic" projects like this come across more 'Sega MegaDrive FMV game' than 'the future of cinema'.

Essentially, Speed Kills VR consists of eight episodes, which are basically scenes from the movie, shot with a 360 camera. Slip on your ridiculously expensive VR helmet and dispense with your last vestige of shame, and you can be in the scene with Travolta and his co-stars. Except: part of the beauty of film is the skill of the edit - the camerawork, the cuts, the close-ups. With VR, you can't move around the room, you can only move your head, so you're basically stuck to the spot like a peeping Tom, and you'll have to choose to either a) watch Travolta acting, or b) check out some of the interesting props in the room. After some deliberation, you'll probably end up going with option a).

The biggest crime of Speed Kills VR, however, is the fact that seemingly at no point during this revolutionary virtual reality experience do you get even close to being on a speedboat. That's the one aspect of the movie that would benefit from 'being there' - feeling the bob and weave of the boat, the crashing of the waves, the sheer power of the vehicle. But why would you want to be out in the surf when John Travolta is sitting in a chair, in a room, surrounded by cacti?

From the looks of it, the VR episodes that are set outside had to CG fake speedboats onto the water. THIS IS THE OPPOSITE OF VIRTUAL REALITY. 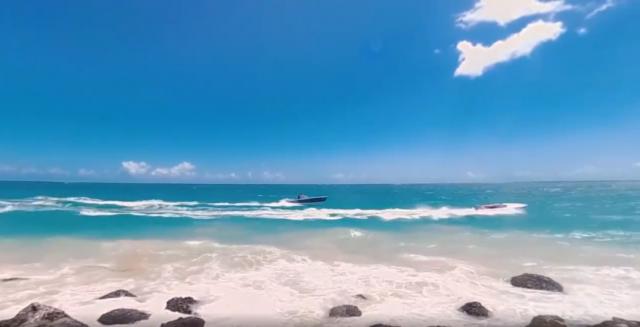 
Let's be honest, it's easy to mock (fun too) but I'm not the target market for something like Speed Kills or Speed Kills VR. I don't know who is, but surely there are people out there who own VR helmets who need something to do other than having expensive wanks. John Travolta and friends are filling that gap in the market of moneyed masturbators - more fool us!

More:  John Travolta  Speed Kills
Follow us on Twitter @The_Shiznit for more fun features, film reviews and occasional commentary on what the best type of crisps are.
We are using Patreon to cover our hosting fees. So please consider chucking a few digital pennies our way by clicking on this link. Thanks!