Maybe this is presumptuous. After all, you shouldn't judge a film by its trailer. Or its cast. Or its poster, synopsis and tagline. But all of these together mean that we can make a pretty well-educated guess: this film is going to be so painfully horrendous, it will singlehandedly destroy all of mankind's efforts towards a better society and mark the end of our civilisation. Again, it's just a guess.

The meat-headed mug plays a cheeky bigamist cab driver in the kind of plot that is so ill-advised, it’s amazing that the Farrelly Brothers haven’t already made it with Johnny Knoxville in the lead role. Here's the official synopsis:

"
"
John Smith has been happily involved in bigamist marriages for five years. He lives with Michelle in Kennington and Stephanie in Finsbury. Fortunately, for John, he's a Taxi Driver which involves varying shift work! Simple? Well, when the Kennington and Finsbury police forces discover something suspicious in their paperwork, Johns happy bubble is about to be burst.

The action of the movie takes place during the next hectic 24 hours as John with the assistance of his gullible neighbour, Danny, rush between Kennington and Finsbury attempting to thwart the police and prevent the two loving wives coming face to face!
Wait, you mean, his wives might find out that he’s been cheating on them? Oh noes! Let’s all root for the guy who's basically being an utter dick.

And who are the lucky ladies in Dyer's double-life? Luckily, the eye-bleeding poster has all the information: the acting heavyweights that are Denise Van Outen and Sarah Harding, ex-member of… I want to say Girls Aloud? Also note the grammatically questionable tagline and the poster quote to which no one wants to own up.

Hover your mouse over the image for additional poster quotes 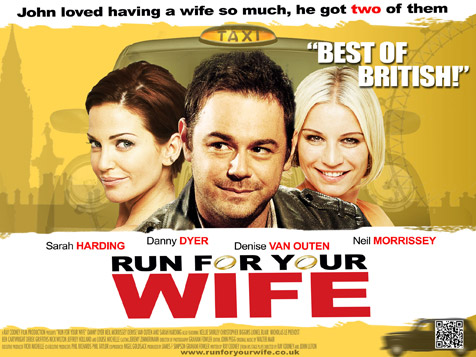 And Van Outen and Harding are just the tip of the British acting talent iceberg. A quick glance at the film’s IMDB entry reveals roles for Rolf Harris, Barry Cryer and Cliff Richard (all of whom play ‘buskers’), as well as Lionel Blair, Christopher Biggins and… wait, is that? Jesus.

And that’s not even the worst of it. Not by a long shot. No, that credit goes to the film’s 'trailer'. And I use those inverted commas in every sense of their purpose, not just because this is by no means an official trailer, but because – as far as first looks go – this is jaw-droppingly wrong in every way. It's basically a quarter of a terrible music video. And it even lists the wrong actress as the singer. Enjoy:

More:  Run For Your Wife  Danny Dyer  Denise Van Outen  Sarah Harding  Kill Me Now
Follow us on Twitter @The_Shiznit for more fun features, film reviews and occasional commentary on what the best type of crisps are.
We are using Patreon to cover our hosting fees. So please consider chucking a few digital pennies our way by clicking on this link. Thanks!