Oh Catfish, how I've missed you. Monday nights just weren't the same without the overwhelming eroticism that is the bromance between co-hosts Nev Schulman and Max Joseph. And now it's back, but in a shocking format twist Max is out of action for six episodes making a film with his new BFF Zac Efron. Nev seems cool with it but I know he's just as upset as I am. Fuck Efron and his quiffy hair.


Instead of the silver fox of social media, Nev's co-host was radio and TV personality Charlemagne Tha God. It doesn't quite trip off the tongue as easily as "my filmmaker buddy Max", but at least now we have evidence of the "filmmaker" part, although I seriously doubt anyone's going to take seriously a film that's been shot on one of those tiny handheld compact cameras he's so fond of.
The bait

The first Catfishee of season 4 was Miracle, who had fallen head over heels with "Javonni Santo", a guy with nice eyelashes who had randomly messaged her on Instagram. Any seasoned fan of Catfish always watches with a mental checklist to tick off the clichés as they come; I personally also have a little imaginary bell to ring.

First up, Javonni said he was a music producer (ding!), there was an illness in his family (ding!) and could never video chat because he "couldn't remember his logins". (Ding! Ding! Ding!) Sadly, Miracle was a typical Catfish victim – sweet, trusting and from a troubled background. Her mother was and still is a struggling drug addict, who thought she had a tumour when she was pregnant with Miracle, but y'know, decided not to check it out with a doctor and would just see how this expanding belly thing would work out.

Miracle never knew who her father was and had to grow up in the shadow of her mother's addiction. Once she had her own daughter she realised she had to be a positive role model and not let her past hold her back. Short of nothing, Miracle lived up to her name; she didn't understand why someone who was so nice to her would lie about having a sister with lupus (ding!) and so there was no way this was going to end well.

Nev, as usual, took his softly-softly good cop approach, giving Miracle a small shred of hope everything would turn out fine, but Charlemagne just straight up told it like it was: "Why that dude not smash a chick?" Why not indeed, Charlemagne – maybe because it's 2015? At Miracle's house, Charlemagne offered to read aloud the romantic exchanges between Miracle and Javonni. It's a good thing Max never did this; I would have faked an entire Catfish situation if it meant he would read out filthy texts to me.
The hook

Armed with nothing more than Javonni's phone number, Nev and Charlemagne decamp to a café with free wifi, leaving the new co-host disappointed to discover there's not actually a bank of researchers sat in a high-tech lab. He, like all the viewers at home, checklist and bells in hand, ponder why Catfishees know how to use Instagram but seem to strike a blank at looking up someone on Google.

The usual searches proved fruitless, until Nev called Max and managed to during some downtime on set (Efron was nowhere to be seen, the little punk). Max quickly reminded Nev of a whole other search engine that Nev had apparently, after three seasons, completely forgotten about. THANK GOD FOR MAX: evidently this season is to fall to pieces if Max and his claw hand are out of action for too long.

This previously-unheard-of search engine thingy revealed that Javonni's phone number was registered to a Rickie Witherspoon, so the good news was it was actually a guy, but my imaginary bell chiming away reminded me this could all be a red herring – this part is basically the second diagnosis bit in an episode of House, where they think it's lupus. 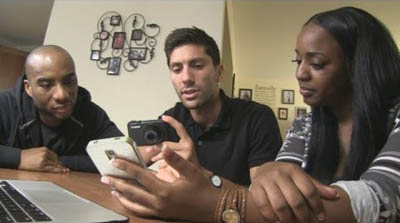 Taking a picture of a picture of yourself: a sort of Selfie2, and what everyone will be doing in a few months.


Combing through Rickie's social media accounts, Nev and Charlemagne uncovered a "music video", which showed Rickie actually was a producer of sorts, but more 50 Pence than 50 Cent (and I realise how lame that reference is, thank you very much). Finally, Charlemagne proved he could be useful when he used his Twitter account to find the guy in the Instagram photos and it was time to take their evidence back to Miracle.

Now, this is the bit on every Catfish episode that I dread: the bit where the victim has to completely shed any last remains of hope that they were actually talking to the person they thought they were talking to. If you pause at the right moment, you can actually see their heart breaking. At first Miracle refused to acknowledge the guy in the video was the guy she spoke to, and in a remarkable moment of clarity when he wasn't bouncing up and down, Charlemagne pointed out she was only saying it wasn't him because she didn't want it to be Rickie.

Even incurable romantic Nev had a hard time convincing her, until he bought out the big guns and called the Instagram guy on Skype. The guy with the eyelashes turned out to be a guy called Jonathan who was utterly bemused by the whole escapade and Miracle's dream love affair was finally shattered into a million tiny pieces, to be scattered on the wind and never seen again.

It seemed a good time as any then to finally call Rickie and ask him just what the hell was up. In a very odd twist that prompted me to put my imaginary bell down in shock, Rickie didn't react like a typical Catfish caught in the net; he was evasive rather than repentant, and was just "ready for the whole thing to be over". He revealed he only lives a few minutes away from Miracle and would rather they come over sooner rather than later so he can explain a few things. Had I been on the phone to Rickie my next question would have been "Where did you hide the bodies?" but Nev simply agreed and Miracle was bundled into the car to finally get some answers.

For a few torturous seconds, the Catfish cameraman appeared to completely forget how to use a camera, unable to focus on the person who steps out of the house, until it was shown that it was indeed Rickie, the guy from the "music video". Pacing up and down and refusing to speak to Miracle, he demanded they go into his house, for reasons he couldn't explain, and there was no way this guy wasn't a serial killer. Charlemagne was duly cautious - "Nev, don't you follow no angry black man into his house" - but as his leather jacket in the promotional photos prove, Nev is a complete badass now and followed Rickie inside.

In his apartment, Rickie was still acting weird, mumbling that he had to show them something and wandered off, presumably to put on his suit made of skin. Charlemagne pointed out the bottles of medication lining the shelves and all signs were pointing to getting the fuck outta dodge.

Rickie returned with a woman – Kara, aka Jovanni. And she's Rickie's WIFE! Plus, she had amazing lipstick on. She trotted out her reasons for being a Catfish – she created a fake account to catch out a friend's cheating boyfriend, she befriended Miracle to keep up appearances, it went too far and she ended up pulling poor Rickie into her convoluted web of lies when Miracle wanted to talk. She's also a bit lonely, on account of her lupus, so she rarely leaves the house, but Miracle didn't buy that as a legitimate excuse.

Words are shouted; someone calls someone "basic", and Kara storms out saying something about Kara's hair only costing 6.99, which seems like a pretty good deal if you ask me.

It takes someone with Nev's deep level of understanding and empathy to realise the two actually have a lot in common and could benefit from the experience. He gets Kara to reveal she really just liked the attention that Miracle gave her and wanted someone to speak to her like Javonni did ("I want u n u only"). The next morning, Miracle and Kara sit down and manage not to claw each other's eyes out; respectively they feel sorry for each other and could even, maybe, be friends...?
Two months later...

Nope. Miracle says she wanted to be friends, but Kara never returned her calls. Kara seems none too bothered by the whole episode, so on the whole, no real resolution. Rickie presumably had a nervous breakdown off screen somewhere. Charlemagne went back to his day job, and Max still refuses to answer my calls.