This week, Nasa's announced the discovery of Kepler452b, or "Earth 2.0", a "habitable" planet that orbits a star similar to our sun and may even have water. If you've ever seen the excellent film Another Earth, you'll be aware of the theory of a parallel Earth, which is identical to ours in every way. There could be another you, but one who took a different direction in life; another version of you who risked taking chances. What if you managed to find a way there and killed off the other version of you, taking on their life? What if they tried to come here and were jealous of your life? Essentially, the boffins have discovered a planet full of potential catfish, ready to take on your life at a moment's notice and start saying all sort of shit about you, and no one would be any the wiser.

In a week of remarkable revelations, it was almost apt (almost) that Catfish tore up the playbook and threw an absolute curveball. This wasn't a tale of love gone wrong, but one of stolen identity, and not even for financial gain.

Falesha had contacted the show after a girl called Jacqueline Linkwood started using her pictures online, but then went one step further. "Jacqueline" changed her name to Falesha and tricked all of the real Falesha's friends into following or friending her, then promptly told them all to kill themselves and/or invited gentleman callers over to have some adult time. She even boasted that she (Falesha) had a "poopy vagina". Such Shakesperian wordplay. The real Falesha spent most of her high school years trying to convince people she wasn't the person mugging them off online and had a stringent hygiene routine.

In 2011, Jacqueline/Falesha disappeared, and the real Falesha thought she was safe until a few weeks ago when Jacqueline sent her a taunting message. 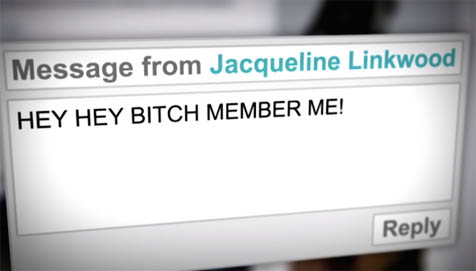 The bitch was back, and only Nev and Max could help.

Immediately, Nev went about inventing new words to add to the Catfish lexicon and came up with the term "copycatfish", which was about the full extent of effort he and Max put into this week's investigation.

Falesha had already figured out that Jacqueline was female, as she used to call her; her mum had then tracked the number to Maryland. After firing off a couple of emails to people who were in contact with Jacqueline, one girl called Jennifer who had been hounded by the fake profile got in contact and revealed she had already gone behind enemy lines and created a virtual honeytrap. She'd created a fake profile using pics of her hot friend to seduce Jacqueline online and then managed to convince her to give her login details so "Trevor" could write gushy messages on her wall. I know kids are into weird stuff these days, but I had no idea giving out your password was the equivalent of wearing his letterman jacket.

Jennifer had already found out what Jacqueline's real name was (Tracey) and then changed all the settings so she couldn't log back in. "Is there anything else you know about this girl?", Nev asked. Other than doing all the legwork, this is all she's got, Nev. Lazy bitch.

Eventually Nev and Max pulled their fingers out and managed to find the energy to Google Tracey's name, which lead them to a Facebook account that had her phone number on it. Was the case closed? Should Jennifer join the Catfish investigation team?

In a quaint little tavern, Nev and Max presented Jennifer's findings as though they were their own to Falesha and a couple of her friends, who confirmed she was a nice girl. Which kinda begs the question as to why so many people readily believed she was capable of dissing others and talking about her poopy vagina online, but I guess that's neither here nor there.

Nev gave Falesha a call, and managed to make contact with the most excited catfish ever. Instead of being evasive, Tracey breathlessly confirmed she was indeed 'Jacqueline Linkwood' and giggled like a 12-year-old girl for a good ten minutes. There's no nice way of saying this: Falesha was a little bit cuckoo. Nev was unsetlled and recounted the phone call to Falesha, who thought she sounded a bit scary. Nonetheless, she was still keen to meet the girl who made her teenage years so awful.
The catch

Tracey had already owned up to the fake profile, so what else was there to see? A whole load of wrong, that was what.

Tracey turned about to be a tween stuck in a 20-year-old's body, complete with annoying Valley Girl accent, hair twirling, "Oh my gooood"s and "whatever"s. She was absolutely stoked to have Nev and Max on her doorstep, but not so much Falesha. Peering over Nev's shoulder, she looked like a toddler confronted with broccoli for the first time as she said of Falesha, "I don't like her. She stole all of Jacqueline Linkwood's friends". Falesha and Tracey were the same age, but light years apart in personality.

Falesha remained cool and collected as Tracey remained relatively chipper and declared she was proud of what she had done. Max's bullshit detector went into overdrive, prompting him to ask "Is this all an act right now?" Tracey looked mock-horrified as she giggled and claimed this was all her; she worked with kids and said they were her "best friends ... they're like my little puppies". Like, ewww guys. She should not be working with children.

Tracey claimed she had created the fake profiles after being bullied herself, and was inspired by Miley Cyrus's alter-ego Hannah Montana into living another life online; by day, (crazy) Tracey, by night (evil fucking cow) Jacqueline. She bullied people back who bullied her for calling her out as a fake. Seriously, bitch be cray-cray.

When Nev told her that lots of people were still distrustful of Falesha because of Tracey's actions, she shrugged nonchalantly and said she deserved it because she was popular already and then ruined her fake profile.

In what was probably the best moment on Catfish history (even more than the Dad Killer episode), Max asked "Are you on drugs?" This boy is on fire. But did he mean illegal highs, or that Tracey may have been off her anti-psychotic meds?

Tracey was clearly thrilled to be on camera and finally have a platform to air her skewed personality; there was no way Nev and co were going to make her feel remorse for what she had done. As they backed out of the house slowly while she giggled incessantly, Tracey declared in her best baby voice that this was "the most fun EVER!", and then went to recite creepy Victorian nursery rhymes in front of a mirror somewhere, brushing her hair over and over again. 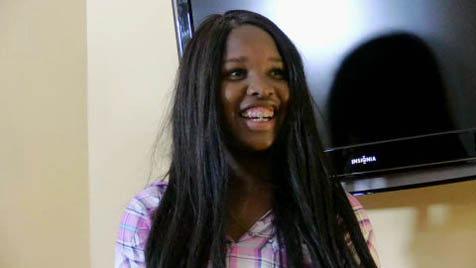 "OMGGGGGG! I knew all those hours of criminally insane behaviour would reap rewards in the end, and here I am on TV!"


In the car drive back to their hotel, Nev theorised that Tracey was mirroring what she saw on TV in Hannah Montana in creating this extreme alter-ego, to the point she didn't know what her true personality was. And something about dicks, probably; I did psychology at A-level and it's always about dicks. Regardless, I don't remember Miley ever saying she had a poopy vagina or telling people to "die from brain cancer".

The next day back at Tracey's, it was less case of dick envy than of being an actual dick. Her mum Dorcus agreed to be at the intervention, but revealed she couldn't stay long because her son was in the hospital; Tracey could not give two fucks.

Tracey's mum was obviously worn down by having such a manipulative daughter, who rolled her eyes when Dorcus wearily told her to apologise for being so mean to Falesha. When Nev tentatively suggested that her daughter was out of control, Tracey again shrugged and declared she wasn't changing for anyone. Clearly, this confrontation was going nowhere.

Before she left for the hospital, Dorcus revealed that at around the same time she started the Jacqueline profile, Tracey's dad had a stroke which left him in a non-responsive state: before that, it was heavily implied he was physically abusive towards Tracey and her brother. Is this a reason for Tracey being the ultimate mean girl? Probably not, although it does make Barbie-bot Tracey seem slightly more human.

After Dorcus left to visit to sick son, Tracey spat "I just don't like my mum" with an unhinged giggle, and was unfazed when Falesha told her she could press criminal charges against her. Tracey insisted she had done nothing wrong as far as she could see, and that she's still a good person. Ye gods: if Nasa's right, there could be TWO Traceys in the universe.

Falesha was getting ready to start school to train to be an accountant; she hadn't heard from Tracey and so far, no more fake profiles claiming to be her.
Tracey claimed not to have started any more profiles, her brother was OK and she even had a boyfriend; as for her annoying personality, she was "working on it". However, she still showed no signs of remorse.

That's it, I've had enough. I'm off to Earth 2.0, see you all in 500 million years. Does anyone know if they have Catfish over there, though?