In this week's Catfish: a lesbian love triangle smackdown and maybe even a sex tape (*watches Google rankings improve*)

I know what you're thinking: a "tattoo model" who's looking for love online but is reluctant to video chat sounds like a classic catfish, right? Except glamorous Joanna was the one reaching out to Nev and Max to help her meet Bo, a girl she had fallen in love with on a dating site. Although the two lived close to each other, it was Joanna who had chickened out of them meeting up and then was left heartbroken when Bo decided to break things off and go back to her ex. Secretly, I hoped that Joanna was catfishing herself; it's about time we had a decent Catfish curveball. However, the introduction of a third party meant things were already going off in a weird direction.

At Joanna's house (not an obvious Airbnb rental, so I'm putting that theory on ice for now), Nev and Max discovered the reason why Bo dumped Joanna. Earlier in the year they were actually due to meet up in Vegas, but Bo was running late so told Joanna to meet up with her friend Ana, who was going to be there the day before. The two got on well, and ended up, as Joanna sheepishly admitted, "cuddling", and "kissing, whatever". Ana told Bo everything that had happened, leading her to break things off. Joanna and Ana met again once more, which is how Joanna found out about Bo going back to her ex. However, Joanna was still in love with Bo and wanted Nev and Max to help them reconnect.

And also fix her phone, which has been cutting out whenever she tries to fire up Gardeners' Question Time on the iPlayer Radio app.
The hook

To keep the momentum of the episode, Nev and Max hold off from stating the obvious that Joanna has already met Bo, who was posing as Ana. Or maybe it's the other way round. Regardless, Bo is Ana, right?

The guys don't get any hits from Bo's pictures, and speculate Bo might not actually be her real name. The only other info they have is her address (but weirdly, no phone number), which the internet tells them is the address of someone called Ana. They muse the point that they have no way of knowing if this is the Ana Joanna met in Vegas, but c'mon, the girl's left a paper trail a mile long!

After seemingly hitting a Catfish cul-de-sac, Nev calls the number Joanna gave them for Ana, who tells them she and Bo are no longer friends but agrees to meet with them. Ana has seen the show a few times, and is quite excited to be meeting Nev and Max. She more or less confirms Joanna's Vegas story, although claims that it was more than just cuddling and kissing. In her defence, Bo hadn't told her that she and Joanna were an item, and that after Bo had broken things off, Ana and Joanna had hooked up again once more – the time that Joanna had told Nev and Max she found out Bo was back with her ex and no funny business had happened.

Rather than ask Ana outright if she is actually Bo, Nev tiptoes around the elephant in the room and asks her, "Is Bo real?" Ana triumphantly pulls out her phone and shows them pictures of her and Bo, except the other girl in the photos isn't the same as the ones Joanna's seen. DOUBLE CATFISH.

Max steams straight in and asks the very first question Nev should have asked Ana on the phone: "Could you also be Bo?" Laughing off the accusation, Ana declares she doesn't need to post fake pictures to get girls. "I mean, you want to see videos, I can show you videos!" Although Max and Nev kinda look like they do want to see them, professional modesty prevents them from doing so. But it raises the question, could there be a sexy video of Joanna on Ana's phone? Do all the girls she's been with know they're being filmed? Perhaps we'll find out on a special late-night edition of Catfish.

On the way back to Joanna to present their findings, Nev and Max agree that they believe Ana's version of events, reasoning that the Bo in the pictures looks so similar to Ana that she'd have no reason to lie. Or would she?

Joanna denies she hooked up with Ana the second time, and says she made it clear to Ana she didn't like her in that way. Nev brings out the photo of Ana with Bo, at which Joanna physically recoils. "Oh hell no!" Charming. The girl in the pictures is pretty, but not the "stud" Joanna believed she was talking to. Upset, she storms off, leaving Max to coax her out and say they'll text Bo to try and persuade her to meet up with them. Bo replies immediately, saying "This has gone on for long enough" and not, "I dumped her, why won't she leave me alone" as she was well within her rights to do. But also, why not call Bo?
The catch

There are no prizes for guessing who Bo turns out to be; it's Ana, who it so obviously was all along. She apologises and at first, Joanna seems unwilling to believe that Ana and Bo are the same person, crying "I want to hear you say it. I want it from your mouth." Where did she hear it from before?

Joanna recovers from the shock to start screaming at Ana for telling Nev and Max they had slept together, and then pow, smacks her upside the head. Ana exclaims that Joanna "bullshits too" and rips off her mic before storming back inside. Go and get the sex tape, Ana! Show the bitch you mean business! 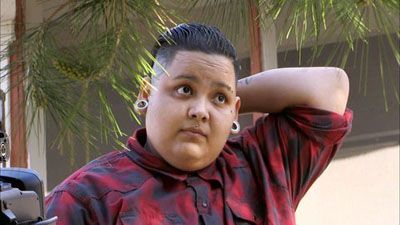 
Max tries to placate Joanna in spite of her overreaction, and Nev ventures inside to find a sobbing Ana, who tells him she lied because she knew if she'd come clean yesterday, Joanna wouldn't have wanted to meet up, "because she's a fucking asshole". Judging by Joanna's actions so far, it's hard not to agree with her. Nev gently asks her about the photos; the ones Ana showed them were of her and her cousin, the "other" Bo was someone she found online, although they do look weirdly similar.

Back in the car, Nev lectures Joanna on how violence is never OK so the lawyers can hear. Joanna sniffs "What did she expect?" to which Nev replies that's exactly what she expected to happen, which is why Ana didn't come clean sooner. She doesn't apologise, and so Nev says they should drop it for the day and come back to this sorry mess tomorrow.

Nev and Max meet with Ana alone, who tells them she changed her online dating profile after the pictures she used of herself weren't getting any hits. She ignored everyone who contacted her except Joanna, because she was so hot. Nev, and the rest of us, try to get to the bottom of what was so special about Joanna. Apparently Joanna's hardness compliments Ana's softness, and Ana is still in love with her. Max offers the opinion that if Ana told Joanna that, she might not think Ana was just dicking around with her.

Riot gear on, Nev brings Joanna to the house, her face looking like a tattooed smacked bum. She's spiky in response to Ana's apologies, who tells her she didn't mean for things to go as far as they did. Would Ana have stood a chance with Joanna if she'd been open from the start? Joanna tosses her hair and gives a snotty reply of "Maybe", but Ana went and ruined her chances. She won't even hug her, even though Ana is being genuine with her apology.

She changes her tune two months down the line, however, when Max and Nev catch up with her. Ana has moved on and is in a relationship, so Joanna's suddenly decided she does like her after all. "You just want what you can't have," laughs Max, which Joanna doesn't refute.

Ana is happy within a new relationship, but that she'll always have love for Joanna. The guys wisely decide not to fill her in on what Joanna said, hopefully so that Ana won't go down that route again and then end up getting another smack for her troubles.