Sadly there are no warring lesbians in this week's catch-up, but there is a woman called Tomorrow, and Nev and Max try to determine someone's identity from sonogram pictures. They're that good.

Tyreme was a 27-year-old unemployed artist who is erm, how do I put this politely ... a little green? First up, he believed his online love's real name was Tomorrow. Dude, no. Secondly, he also believed that she was unable to video chat because the camera on her iPhone 6 was broken, even though she was still able to send him loads of selfies.

The couple had bonded over both being diabetic, which gives me hope that I'll eventually connect with someone who also gets frequent urinary tract infections. Although they had never video chatted, Tyreme had talked to some of Tomorrow's family and friends. According to Tyreme, Tomorrow lived in Mississippi, although a lot of her photos showed her wearing Missouri State jumpers. Neither Nev nor Max can bring themselves to correct him.

During their relationship, Tyreme and Tomorrow briefly split up, during which time Tomorrow slept with her best friend Latrease's ex and got pregnant: she sent Tyreme a sonogram picture so it was definitely true. Sadly, Tomorrow "had a miscarriage" and she and Tyreme resumed their relationship, but for all Tyreme knew, she could still be pregnant.

It was time for Max and Nev to go and land themselves a Catfish – maybe even an entire school. 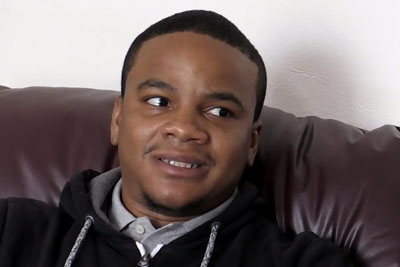 "A school? We're going to school?"
"No, a school of ... forget it, Tyreme. Here, pop this bubble-wrap for a couple of hours."
The hook

The fact that Tomorrow looked like a model but didn't have a glamorous job (she was a cook in an old people's home) gave Nev pause for thought that Tomorrow actually might be real, even though her full name was Tomorrow Christina Johnson. I mean, who has Christina as a middle name?

Going through her Facebook profile, Max spots further evidence Tomorrow is in Missouri and not Mississippi, owing to some football paraphernalia in the background of one of her pics. So that's strike one.

A Google image search proves fruitless until one particular pic gets a hit on Twitter for someone called Aryssa. Nev finds her on Facebook, so they decide to contact her first. As they wait, they look up Tomorrow's phone number which is registered to someone called "Christ". Well, we've had a Tomorrow, why not Christ? Max seems to think "Christ" might be short for 'Christina', which OMG is Tomorrow's middle name. That's uncanny.

However, on Facebook the number appears to be registered to someone called Shadejia who has a sonogram picture as her profile image. Oh wait, Tomorrow sent a sonogram pic too. It's all lining up.

The guys move on to checking out Latrease, whose page looks genuine but there are no pics of her and Tomorrow. Tomorrow did sleep with Latrease's ex, so I guess it's possible she deleted all pics of them. But then it's also possible Latrease is Tomorrow, because who else could it be? A deep dive of her friends throws up someone called Christina, who was also friends with Tomorrow. Could this be the Christ they were looking for? Could it be Tomorrow was more than one person?

Back at Tyreme's, he hasn't heard of either Christina/Christ or Shadejia, who appear to be the joint owners of Tomorrow's phone. They show him Shadejia's sonogram photo, although all this proves at this point is that at some stage, two women were pregnant at one time or another. Despite the fact that all sonograms look the same, they dig out the picture Tomorrow sent Tyreme, and they appear to be a match. Tyreme doesn't appear to understand what this means until Nev and Max gently point out that it's possible Tomorrow might actually be Shadejia. No one has responded to any of their messages yet, which might mean that all three girls have realised they've been rumbled. Tyreme is crushed, although he appears to be more upset by the fact he's realised Mississippi isn't spelled M-i-s-s-o-u-r-i.

Nev leaves a message on Tomorrow's phone and they leave a very dejected Tyreme. On the ride to the hotel they receive a text from Christina, who says she wants to meet them so "they" can explain, so they round up Tyreme and head down to Dothan, wherever that is. 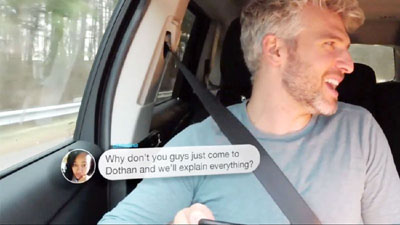 The mayor is Ian Bothan.
The catch

The trio are met by the very pretty Christina, who by the looks of it Tyreme is hoping could be Tomorrow. She admits she's never heard of Tyreme, but feels bad for what's been going on. Christina disappears inside and brings out another girl. It's Latrease, who introduces herself as Tomorrow. Tyreme looks like he wishes it was yesterday.

Latrease explains the fake profile came about as a way to get back at her ex, but she didn't expect to fall in love with Tyreme as a result. Tyreme asks why she couldn't have been honest in the first place, which he immediately regrets. In the early days of their relationship, Latrease showed Tyreme pictures of her true self, which he apparently said some very unkind things about.

Max quickly clears up who owns the phone for the expecting public – Shadejia is Latrease's younger sister, and she actually is pregnant. Latrease invented her pregnancy to push Tyreme away, but he came back for more, and that's why Latrease loves him, because he's obviously a keeper if not even a fake pregnancy can put him off.

Back in the car, Max attempts to subdue a shocked Tyreme with "It's a shame looks matter, doesn't it?" as a way to make him feel better about being mean about big girls.

Latrease gets to give her side of the story the next day, and how hurt she was when Tyreme made disparaging remarks about her. To be fair to Tyreme, he was still trying to woo the girl he thought was Tomorrow, so it wasn't likely he'd say "Yeah, I'd love a go on her." Latrease claims she meant everything she said to Tyreme, and it was only her picture that was fake. And her name. And where she lived.

She tries unsuccessfully to guilt him into reciprocating her feelings, asking "Why am I not enough for you?" Tyreme covers his face, unable to answer just why he doesn't fancy her back. It's up to Max to explain the reverse would have been true if her had met the girl in the pictures and she was a jerk. Which is kind of true, and also means Tyreme doesn't have to end up being the enemy of the piece by openly admitting he just doesn't fancy big girls. He tells Latrease he will always cherish the time they had together, and he'll always be there for her. Just not in the way she wants.
Two months later

Despite his shock, Tyreme stayed true to his word and kept in contact with Latrease, who tells Nev and Max that they talk almost every day. Latrease isn't dating yet, and I really hope it's not because she hopes one day Tyreme will change his mind.

Next week looks to be the best Catfish of all time, where a young woman is contacted by someone claiming to be receiving messages from her dead father, so I'll be able to tell you about the time I met Derek Acorah. What's that Sam? Mary loves who?