As you might have guessed from this feature's title, I've gathered together the great and good to discuss all five Mission: Impossible movies, before the sixth installment bungees through the skylight and shoots us all with its fun-gun. I was going to call it 'Chattin' Impossible' before Matt came up with the above title (actual WhatsApp quote: "Jesus Christ do I have to do everything"). Hopefully it'll go just as well as the exhaustive Marvel Cinematic Universe walkthrough we started and abandoned after three movies. Let's begin Discussion: Impossible! 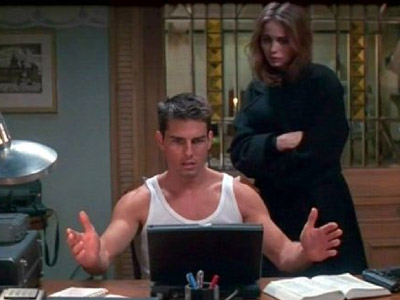 "It says here the mission is Internet Connectivity Problems."


Ali: So what did everyone think of the first Mission: Impossible? I thought it was a really interesting throwback to what an action thriller used to be. Proper, actual drama, based on characters! Exceedingly tense set-pieces! A massively banging theme tune! It was released in a fascinating period for big-budget movies - before special effects overkill and before remakes and adaptations were ten-a-penny. It feels like a movie that's been sort of fossilised in amber. It doesn't feel ancient, but it certainly doesn't feel like it came out, say, the year after Toy Story. For a start, none of the characters seem to know how email works.

Matt: Did you see that he messages the Book Of Job message board as 'Job' so his contact is then 'Job@Book Of Job'. All of that is dated really badly for a film reliant on appearing hi-tech. All the computers suffer from that era of big exposition pop-up windows. SEND JAMMING SIGNAL? Y/N SENDING JAMMING SIGNAL.

Becky: Outdated technology aside (it looked hi-tech enough at the time, I don't think I even had an email address back then) I loved how it is just a decent spy-thriller punctuated with cool action sequences when it all gets a bit too cerebral. I personally feel a bit indifferent to the Bourne and Bond films as I find them a bit too macho, but this is just cheesy, all-round, good old-fashioned fun, right?

Matt: Agreed. I was surprised rewatching this just how effective it is as a tense spy thriller first and foremost, rather than an action blockbuster. There's actually not much in the way of spectacle apart from the final Channel Tunnel sequence. Instead it's all Cold War style codenames and double-crossing. I love the spy reveals throughout the film, like how Ethan recognises agents from throughout the night now in that restaurant with him, and (*puts Film Studies hat on*) it seemed to me that De Palma uses a lot of POV shots throughout to give it a sense that you might only be seeing one part of a bigger picture. On the whole, it really holds up as an effective thriller.

Becky: Not much in the way of spectacle? Did you miss the break-in at the CIA which is done in almost complete silence and no soundtrack? It's been parodied quite a lot since, you should look it up (snark, snark). It's low-scale but still very exciting. De Palma is the king of the suspenseful set piece and there are at least three good ones that spring to mind. Those POV shots make it feel quite edgy, like Matt says you feel like you're only seeing a small part of a bigger picture (although at times it makes the plot at bit head-scratchy, e.g. "Did I miss something earlier?")

Ali: I have to say, I noticed the camera work more in this movie than I did in any of the others. During the restaurant scene with Kittridge, there are some right tasty close-ups. I think that interchange is probably my favourite scene in the movie, outside of the heist stuff, and the line-reading "Kittridge, you've never seen me very upset" is one of Cruise's best deliveries.

Ed: First time I've seen it. It's all right, isn't it? I presumed from Cruise's cappuccino machine jibe at the start that he was going to be the cocky upstart whose journey is to learn teamwork and being less of a bell-end etc. But it's quite different as a character thing. In fact it's not massively concerned with character, more heist detail. 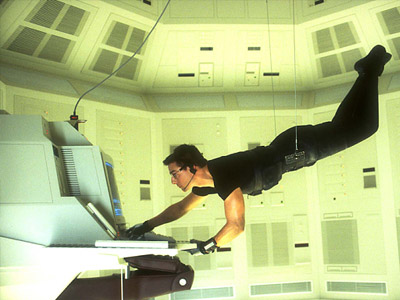 That's got to be tough on the bollocks.


Matt: That whole Langley set-piece is brilliant. There's a reason why it has been parodied endlessly - it's incredibly tense, looks like nothing we had ever seen before and you genuinely get the sense of this being a truly impossible heist that has to be executed to perfection. In hindsight, it's almost a shame that the biggest part of the plan revolves around giving ol' Joe Officeworker the shits. It means that a lot of the tension comes each time the guy approaches the door again and us not knowing whether his stomach is going to hold it together.

Ali: The Langley heist really is quite phenomenal, it's orchestrated perfectly down a single bead of sweat. I love that it has several layers of established rules - sound, movement, even temperature - so it really feels like a mega accomplishment when they pull it off. There's one amazing thing about it which never gets discussed, however, which is the scene where Jean Reno's character gets spooked by a rat and nearly drops Cruise on the floor. When it cuts back to Reno - who's had both hands on the rope at all times - the rat is dead. Which means there's an amazing deleted scene somewhere of Jean Reno headbutting a rat to death in an air vent. (*plays Mission: Impossible theme music*)

Becky: Also good: killing off Emilio Estevez in the first five mins. At first it's like, "Ooooh, I didn't know he was in this", to suddenly "WTAF?"

Ed: I enjoy how because it's De Palma he can't resist a bit of gore, especially with Emilio getting the shaft before a mega-quick cutaway, and it's totally out of step with the rest of the tone. But I like it for that.

Matt: One quick downside. I hate to be the Mission Impossible Purist (there are so many of us around), but I have always absolutely hated what they did to Jim Phelps in this film. I grew up loving the Mission Impossible TV series, and it is established in every episode that Phelps practically IS the IMF - he is the genius strategist that solves every impossible ask. So to have him here as a turncoat, not only killing him off, but having him become such an abhorrent villain (when he says "I've tasted the goods" about his wife - shudder), really annoys me. I get that they wanted a way in for Cruise/Ethan to take over, but it grates on me that this shows not inconsiderable disrespect of the original show.

Becky: I'm not a fan of the original, so I'm meh towards the treatment of Phelps, but if he's such a good guy then surely making him the villain is a masterstroke?

Ali: Yeah I didn't realise Jim Phelps was an established guy. I thought the main character from the TV show was called 'Mitch Impossible'. 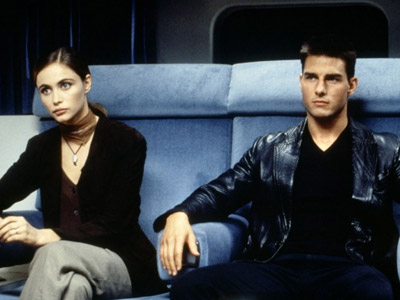 I think we all remember the character played by [checks notes] Emmanuel Beart.


Matt: Can we talk about the face-mask thing? I think as we go through these films we'll be aware of how much the franchise writes itself into a bit of a hole by overusing this device, but I had forgotten that it was introduced right at the very start of this film. It feels like the entire Mission Impossible series has been built on this one idea: VERY GOOD MASKS. It's truly horrible when you can tell that it's just Tom Cruise in prosthetics, as in this film, but I still think it looks great every single time you see a mask get whipped off the face. I can NEVER see the join between the CGI and the actor.

Ali: The masks thing never bothered me. It was in keeping with the show, yes? I like to think that was the height of spy sophistication in 1996: wearing a big, Bo Selecta latex mask and putting on a vaguely discernible accent. I think it's telling that the more recent Mission: Impossible movies don't really do masks any more, because it feels a bit hokey these days. It's basically cheating. But it works quite well here, because it's not overused. In any case, it's drama at a different pace - it's not Tom Cruise trying to kill himself in the name of entertainment.

Becky: I liked the masks - the first one is such a good opener as it's so obviously Cruise, but you’'e meant to go “Whaaaaa?!” and rub your eyes in disbelief. And the second one is just inspired. Don’t they do it again in Rogue Nation, though?

Matt: I like it too. I think it looks fantastic. But as we go on to watch M:I-2 and M:I-3, I think we'll see that it is a device that gets leaned on far too much. Which is why it's great in Rogue Nation that the 'mask-building machine' breaks down. 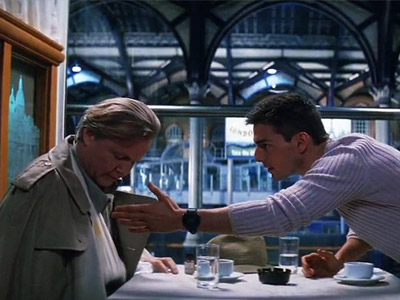 £6 for a burger and a beer at the Liverpool Street Spoons. Just saying.

Ed: I like watching films from the modern era where people smoke indoors because it seems so incongruous now, so hats off to the meeting on the train where Jean Reno's holding a lit cig throughout but never once actually smokes it. He's French FFS. It's just not realistic. Shout-out to the David Schneider cameo too.

Becky: Fave bit is probably the sit down with Kittridge which is just so full of tension and filmed like an epic duel, even though it's just two guys in a restaurant. Second fave: the opening fake out. It was ballsy and totally unexpected, with a little dash of gore because Bri just can’t help himself. Least fave: the slightly rapey scene between Cruise and Beart. They’re being all sexy after a bit of a wrestle with chests heaving, and panting as they look in each other’s eyes, but it’s so creepy given we know that Hunt's got a thing for her and she's (apparently) meant to be grieving and in shock.

Ali: I like that this movie was released in the infinitesimally small window between Tom Cruise becoming a huge blockbuster star and Tom Cruise owning his real teeth. It's quite odd when he smiles, because it's just a normal smile and not a Tom Cruise MegaWatt Movie Star Smile TM.

Matt: My favourite bit hands down is the sleight-of-hand trick that Ethan pulls with the computer disk. All sources I can find say that Tom Cruise learned and did the trick himself, but I have watched that a hundred times and can't believe it's not a camera trick - it's so quick and smooth. Nowadays, Cruise has to fly into space, jump out of the plane and break his leg to sell tickets, but this cheap magic trick is still my favourite stunt in the whole series.

More:  Discussion Impossible  Mission Impossible  Tom Cruise  Brian De Palma  Jean Reno  Ving Rhames  Jon Voight
Follow us on Twitter @The_Shiznit for more fun features, film reviews and occasional commentary on what the best type of crisps are.
We are using Patreon to cover our hosting fees. So please consider chucking a few digital pennies our way by clicking on this link. Thanks!