In summary: it's OK for dramas and even stand-up comedians to be bleak, but it's not OK for comedies to be unfunny. Even if they would rather call themselves 'dramedies'.

I was talking to someone this weekend about the film adaptation of We Need to Talk about Kevin, and in doing so I made an excellent and world-beating point, as I often do, about films and TV considered 'bleak'. It ran along these lines: when you recommend a film or show to somebody and they respond: "Well, that sounds really depressing! I won't bother with that", you should, by way of retort, punch them in the throat.

For what is interesting about watching people have a really good time? You could stand in a kids' playground and do that, but you'd get bored even before the police arrived. Storytelling is about conflict and resolution, and increasingly these days not even about resolution. You should want to be affected by something.

The three episodes of This is England '88 are deeply affecting. They get under your skin. This is an achievement, not something to shy away from. Throughout it are top-drawer performances, most notably from Joseph Gilgun and Vicky McClure, who took their small roles from the film and, given scripts that put them front and centre, grabbed their opportunity to be the TV adaptation's heartbeat, as well as the oddly-little-coveted seventh placing on our top 20 TV shows of 2011.

And now it's out on DVD and Blu-ray. Buy it. You might be left feeling a little bit drained by the end, but if you view this as a sign of having experienced something worthwhile, I congratulate you. And I won't punch you in the throat.

Sirens - Series One (DVD)
Buy the DVD on Amazon 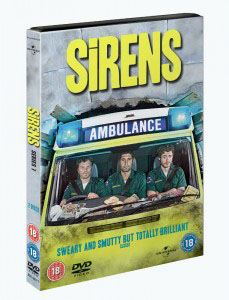 It is being marketed by marketers as a 'hilarious' dark comedy, which is an odd angle to come at for the first series of Channel 4's Sirens. In reality, it's as though someone has watched the very successful and acclaimed No Angels, and thought to themselves: "We need to make this again. But for men!" In actuality, it's based on a book which is based on the eye-opening blog of a real paramedic: Random Acts of Reality.

No Angels had nurses, so male nurses were out, doctors' jobs are much too serious for this kind of thing - and Green Wing had already set the standard for doctor comedies on Channel 4, so paramedics were all that was really left for hospital-based japery.

If I were reviewing this series based entirely on the first episode, this would be a very short article and all it would say is "No." The plot is weak, and the characters are all one-dimensional and not overly charming. The dialogue is clunky, full of awkward cliches and flat jokes. But that's based solely on the first episode, as I say. It kind of improves as the series progresses, but possibly only because you get used to them being miserable and awkward. The jokes are never laugh-out-loud funny, and the emotional dramatic aspects of each episode are usually quashed shortly after by a poor dick joke.

Kayvan Novak (Fonejacker, Four Lions) is trainee Rachid, a nice bloke who's a bit slow in the brains department, and as the series progresses we find out maybe he's not as innocent as he seems. Richard Madden (Birdsong, Game of Thrones) is Ashley, the gay straight-man (hohoho), best of the bunch and best friend to Rhys Thomas' (Shooting Stars, Bellamy's People) self-proclaimed "alpha male" Ashley who is a total knobplunge with - interestingly for a male lead - huge daddy issues.

All of them bring something to the show (Madden's seductive lip-biting when he's on the pull is worth the price of the DVD set), but Thomas struggles at first to give weight to Ashley's swing between real emotional issues and deadpan 'comedy'. To begin with it seems that Novak is retreading the role of misguided simpleton that won him an award in Four Lions, but there's more to Rachid than meets the eye.

If you don't go into the series expecting great guffawing laughs, then maybe it would work out for you. In all reviewing honesty, I'd buy this as a gift for someone I knew who was a fan of Rhys Thomas and really that's about it. In the end though, the most important thing is that whatever hospital No Angels, Sirens and Green Wing all work at is, frankly, a hospital to avoid for all time. Unless you want to be insulted or shagged. Kirsty

Doug Stanhope: Before Turning the Gun on Himself ... (DVD)
Buy the DVD on Amazon 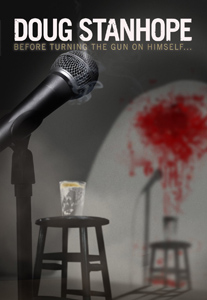 Doug Stanhope is probably the best stand-up comic I've ever seen. I discovered him a few years back when I got home drunk and turned on Channel 4 to find an American in red long-johns sitting on a hotel bed in Edinburgh calling a gay chat line to offer sex in return for citizenship. "What am I into?" he said. "I don't know, donkey-punching, Cleveland steamers, adult babies, Voltaire's angry glove. Whatever."

Now I'm filled with that numbskulled sense of resentment whenever I hear people who only saw him for the first time on Charlie Brooker's Newswipe singing his praises. "I heard about him first!" I want to say, like an idiot.

The debauched comic is a pretty old act, but you never got the sense it was anything other than an act before. With Stanhope it's real. He will get through a stupid amount of beer and Jagermeister in a 90-minute show. The drunker he gets, the better he gets. By his own admission, he isn't funny when he's sober. "Jesus died for your sins," he said in one of his shows. "I'm doing it for your mere entertainment dollar." He covers uncomfortable material, including the story of assisting his mother's suicide. On one CD he tells a story of picking up a hooker in Phoenix whom he discovered to be a man while he/she was sucking him off. It's told with no embarrassment whatsoever, and I never doubt any of it to be true.

This DVD I haven't seen, but it's released at a time when he's just beginning to become a name over here, with a show at the Hammersmith Apollo topping off his current UK tour next month.

And yes, I know this hasn't been on TV, but it's either this or I try to wring three paragraphs out of Call the Midwife or Prisoners' Wives. Your choice. Well, more accurately it's mine.

30 Rock - Season Five DVD
Stella DVD
More:  DVD Weekly  This Is England  Sirens  Doug Stanhope  Joseph Gilgun  Vicky McClure  Kayvan Novak  Richard Madden  Rhys Thomas
Follow us on Twitter @The_Shiznit for more fun features, film reviews and occasional commentary on what the best type of crisps are.
We are using Patreon to cover our hosting fees. So please consider chucking a few digital pennies our way by clicking on this link. Thanks!