Extraction: what Hollywood could and should learn from Inception

Matt's spoiler-free review has been up for a while now, so go and have a butcher's if you want to get a general idea of the quality of Inception without spoiling the experience (hint: it's really, really, really good). This article is relatively spoiler free, but I'd recommend seeing the movie before reading this.

It would seem like there is a lot riding on Inception. So far, this summer has been a big, fat disappointment. Expected juggernauts have tanked (so long, Prince Of Persia) while otherwise sure-things have been given critical kickings (I still love you, Iron Man 2). The way the other big releases all scattered from a mid-July release should tell you how scared the studios were of going up against Inception; Chris Nolan's intimidation game had already begun before a single second had been seen.

[gallery]But why was everyone so on tenter-hooks? This wasn't a film with a number in the title; it's not based on a videogame, or '80s TV series, or trashy novel; there are precisely zero fighting robots (unless there's a really deep layer of subtext I missed).

Why? Because it's based on that most rare commodity in Hollywood: an original idea. Inception might be a $200 million blockbuster, starring one of the industry's most popular actors, but unbelievably, it was still considered a risk. Without the in-built fan base of a comic-book or best-selling book behind it, Inception had a hell of a lot riding on its success. You could practically hear the Warner Bros' money-men collectively clench when it opened on Friday.

Turns out they needn't have worried. Inception debuted to the tune of a $60 million opening weekend, which is nothing short of a miracle. In comparison, Nicolas Cage's Disney adaptation, The Sorcerer's Apprentice, only managed $24.4 million and that opened on Wednesday. It's the biggest opener of Leonardo DiCaprio's career (even Titanic couldn't match it) and what's more, things are only going to get better.

The phrase is bandied around often, but Inception genuinely is a movie that you'll need to see twice to fully comprehend. That's not to say it's complicated (though it is complex) or muddled (quite the opposite) but because it's a piece of bravado filmmaking for which one viewing simply will not be enough. So dense is its structure, so labyrinthine its plot, it's unlikely you'll understand all of its intricacies the first time. But you will want to sit through it again. 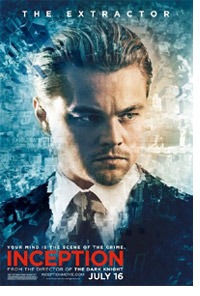 Word-of-mouth for Inception is going to go through the roof. It's a movie that dares to engage the audience on an intellectual level. It challenges and asks questions - and asks you ask questions of it. The movie does not end when the end credits roll; if anything, it folds back in on itself. The audience reaction that greeted the last, agonising shot of the movie, is unlike any I've ever experienced - likewise the chatter I heard on the way out. It's an ambiguous ending - the best kind of ambiguous ending at that - but that final shot will fuel the kind of fan theories not seen since The Matrix.

(FYI, my current favourite theory is this one. It all sounds so plausible, but then they always do, huh? Frankly, I prefer the most literal interpretation of the film, but I'm always open to persuasion.)

This is a relatively new concept for Hollywood to process: the idea of a movie living on in the consciousness of audience members long after it's finished. Usually, the process works the other way: the studios must generate interest before the movie is released, with drip-fed information, teasers, trailers and (rather pointless) viral games. But is it not enough to let the movie be the start of the experience, rather than the end? The web is buzzing right now with talk of Inception; at present it's #3 on IMDb's all-time Top 250 list. Repeat viewing is going to be huge.

I guess what I'm saying is that if Inception was a risk, then maybe Hollywood needs to take more risks? There is a paying audience out there who are willing to take a leap and spend two hours in the company of characters they've never met before and concepts they are unfamiliar with. We just need to be trusted once in a while. Don't patronise us and dumb things down for us or charge us extra for bullshit 3D we don't want or need. Don't stifle the creativity of the storyteller for the benefit of the accountant. It's like Ariadne says: the appeal has always been "pure creation".

Unfortunately there are few writer-directors out there like Christopher Nolan, and without the benefit of foresight, it's hard to tell if Inception will be a genuine commercial success or a flash-in-the-pan. But let's say the unthinkable happens and Inception rakes in a big box-office take: what then? Will this mean studios will invest more in original ideas and allow the auteurs behind them free reign to bring their visions to the screen?

Probably not. If anything, it'll probably just lead to more movies like Inception - and I mean that quite literally. It seems to me like Hollywood has found its new saviour in 3D, and Inception's success will be an added bonus, nothing more.

Still, I'd like to think that, as Hollywood's most influential exit the theatres in America this weekend, with their minds still spinning just like Cobb's top, that maybe - just maybe - the seeds of change may have already been planted.

More:  Inception  Christopher Nolan  Leonardo DiCaprio
Follow us on Twitter @The_Shiznit for more fun features, film reviews and occasional commentary on what the best type of crisps are.
We are using Patreon to cover our hosting fees. So please consider chucking a few digital pennies our way by clicking on this link. Thanks!