Bank holiday season is upon us! You know what that means: a bumper edition of Films on TV round-up starring all your favourite child-friendly movies! Actually, only two.

Daniel (-san) LaRusso moves to New Jersey with his mum and has a little trouble adjusting to his new life. He falls for a cheerleader who thinks he's cute too, but she's dating the local martial arts expert (obviously cool). Johnny and the Cobras - who clearly should have been a doo-wop band instead of a gang of bemulleted thugs - torment and beat on Daniel until Mr Miyagi comes to his aid and teaches him the ways of karate, waxing and wearing amazing Halloween costumes. 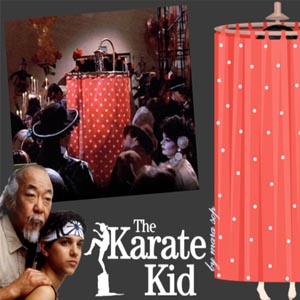 This bona fide classic coming-of-age movie may date a little, (those jean jackets, that hair, the widespread martial arts) but as a story of underdogs triumphing against all odds it still stands tall. Respect for your elders, good car maintenance and never sweeping the leg are all very important life lessons. I hope that The Karate Kid - the proper Karate Kid - continues to be shown on bank holidays until at least the end of my lifetime.
Kung Fu Panda (2008) Friday, BBC3, 8.30pm

Another martial arts movie; kids really do love kicking things and breaking bits of wood in two, so I can see the attraction.

Kung Fu Panda is rollicking good fun. It's set in ancient China in the Valley of Peace, where Po (a massive clumsy Panda voiced by Jack Black who works in a noodle bar) worships the Furious Five, a band of expert kung fu masters who protect the Valley of Peace from ... not peace.

Po wants to be a master, but he's a big fat numpty and everyone laughs at him, until an old tortoise has a dream which sees Po saving the world. The tortoise is a kung fu master too - they're all animals, I should have mentioned that earlier. Po trains, and tries, and falls down, and tries some more. In the tradition of any and all unlikely-hero movies, he does pretty well in the end.

It's a lot of fun and definitely one of DreamWorks' better efforts, well worth a viewing once the sun has gone in and everyone's a bit tired and smells of barbeque. Luckily it's on at 8.30pm - a tiny bit late for a kid's film if you ask me, and BBC3 is an odd place to show it. Have they already run out of White Van Man reruns? Oh, my, what a crying shame.
The Reader (2008) Monday, Film4, 9pm

Well, my adult friends, here's a thing: The Reader is on, and Kate Winslet is in it. It's based on a book, and has something to do with Nazis.