Forget it, Jake... It's (the Somerset House screening of) Chinatown

Well, sort of near Chinatown, anyway. I ventured out of my gaming chair to attend the Film4 Summer Screen showing of Chinatown at Somerset House. And you're going to hear all about it, whether you like it or not. (I hope you like it).


I'm sure you're all aware of Film4's outdoor cinema season, Summer Screen, held at Somerset House in London - people have already been calling it The Event Most Likely To Sell Out Before You Can Even Get A Bloody Ticket of the year. Luckily, my precognitive skills kicked in at just the right time for me to land two tickets to Chinatown - tickets which were later rendered useless when I realised I have totally hip, super-cool media buddies who blagged me inside the 'guest area' (a rope separating the elite from the shitmunchers) for free. Like a boss. 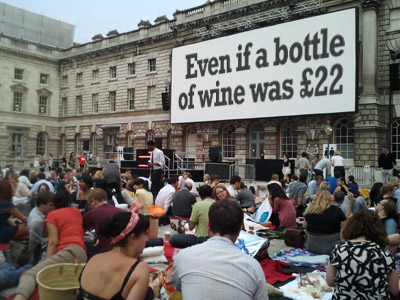 Anyway, I've never seen Chinatown before, so I was fairly cautious, thinking perhaps it's not the greatest film to go and watch in a social environment with a large gathering of people - people with crisps and wine and a desire to take their shoes off and rest their feet on my bag of food. But I was wrong. Except about the guy with his shoes off.

The minute the film flickered onto the giant canvas hoisted high above the huddled masses, a hush descended on the crowd and didn't let up until the end credits started rolling. It was so quiet, you could actually hear the projector running at the back of the arena - a good 100 feet away, with at least 250-300 people in between. That's a lot of Doritos going uneaten. 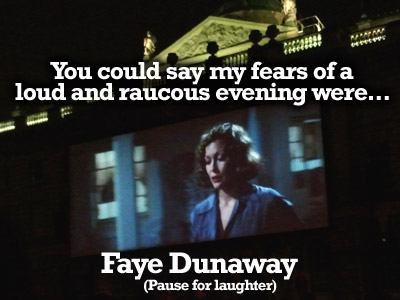 I've never experienced a cinematic audience so respectful of a film before. It was amazing. At one point, you could hear the gulls overhead laughing at Jack Nicholson's face bandages. Bloody freeloading birds. They didn't have to pay for tickets they then didn't have to use. Tsk.

Anyway, kudos to Film4 and the people at Somerset House for creating such a wonderful environment in which to watch a film. If you're headed to one of the remaining screenings, I'd recommend taking a nice chunky blanket and plenty of cushions, and not sitting next to someone with bunions and no concept of personal space.

Oh, right - the film. This may come as a shock to you, but it's pretty ace. I'm always reticent when it comes to catching up on the classics - it's almost like their baggage counts against them, naming no names BLADE RUNNER - but it's easy to see why Chinatown is such a classic. The period setting is a delight - all sax solos and cigarette cases and sharp collars - and the cast are on top of their game. It's impossible not to fall in love with this guy. 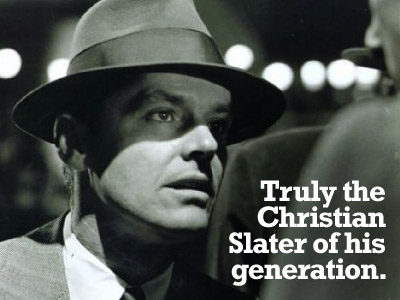 Like all detective mysteries, it's sometimes a little overwhelming trying to keep up with the sprawling plot threads (something about water, murder, conspiracies, orange groves, cover-ups, applecores, wet shaves) but it all comes together expertly at the climax, the narrative deconstructed like an IKEA manual for all the idiots like me. I approve, Mr Polanski. Not all of that other stuff, just this.

That's a twofer, then. Not only did I get to see a brilliant film, I got to see it with a brilliant audience too. Outdoor cinema... it's the future!

More:  Somerset House  Events  Film4  Chinatown  Roman Polanski  Jack Nicholson  Faye Dunaway
Follow us on Twitter @The_Shiznit for more fun features, film reviews and occasional commentary on what the best type of crisps are.
We are using Patreon to cover our hosting fees. So please consider chucking a few digital pennies our way by clicking on this link. Thanks!