The first time I laid eyes on the poster for David Fincher's Gone Girl, adapted from Gillian Flynn's excellent book, I didn't think much of it. Futura? Yawn. Ben Affleck looking sad? Tell it to Batman. A giant floating head? Probably the most overused poster cliché there is. Then I noticed the whopping great easter egg for fans who have already read the book. Then it clicked. And now I think it's genius. Read on if you want to see it (spoiler).


It's one of those little design elements that transforms a poster from an average one to an excellent one. And it's even cleverer once you think about it because it subverts a poster cliché we've seen a thousand times, so much so it's hidden in plain sight and you probably didn't even notice it.

Want to know what it is? Apparently you do, because about ten seconds after I did an admittedly teasing tweet on the subject, these started appearing in my @-feed:

I wasn't impressed with the Gone Girl poster until I realised the (not subtle) easter egg for readers of the book. pic.twitter.com/39W6C53hFZ


@The_Shiznit What the fuck are you talking about?


@The_Shiznit my wife has read the book and is staring at the poster, willing her memory not to be so terrible. She's no idea what it is.


@The_Shiznit I have. I’m staring at this thing like it’s a magic eye painting. Maybe my memory of the book is fading.


@The_Shiznit I have read the book and CAN'T SEE IT


@The_Shiznit Can I get in on this DM action plz?


@The_Shiznit DM ME THE ANSWER BEFORE I GO MAD 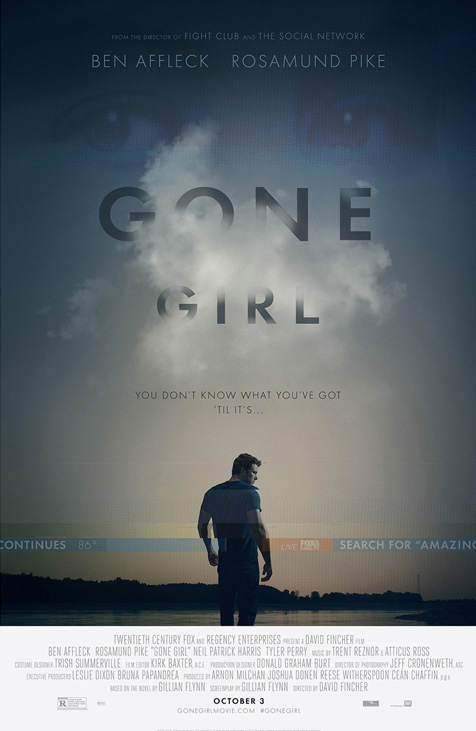 >>> Highlight to read:It seems bloody obvious once you know, but if you've read the book, you know that Amy isn't dead at all and is masterminding her own disappearance. Her eyes that you can see at the top of the poster aren't just floating there for no reason: that's a reflection of Amazing Amy, alive and well, watching the saga of her own murder on TV (check out the news ticker and the fidelity of the image). <<<

See? I told you it was obvious. Tell your friends.

More:  Gone Girl  Ben Affleck  Rosamund Pike  David Fincher
Follow us on Twitter @The_Shiznit for more fun features, film reviews and occasional commentary on what the best type of crisps are.
We are using Patreon to cover our hosting fees. So please consider chucking a few digital pennies our way by clicking on this link. Thanks!