This is it. This is the content I crave. The world is a horrible place, full of racist demagogues and insidious politicians and hordes of idiots and hurricanes, but the news that Liam Neeson thinks a horse recognised him from a previous movie somehow makes everything okay. Liam Neeson doing horse whispering is the salve on the gaping wound that is 2018. Shhhh. Everything is going to be fine. Let's read it again, together.


A public service ICYMI: Liam Neeson told reporters at Page Six that a horse he worked with on the new Coen brothers movie, The Ballad of Buster Scruggs, recognised him from a different movie they had both previously worked on. We're going to go all in on the quotes in about one thousand words' time, but for now, this is the gist: Neeson and his bestest horse pal shared an inter-species bond that transcended the physical, spiritual and emotional boundaries of all human and equine life. Kanye met the President, but LIAM NEESON WAS RECOGNISED BY A HORSE. This is Page 1 stuff, mainstream media, and you can ignore it no longer.

Actors bonding with animals is my brand. You can keep your stories about how, oh, Tom Cruise learned to hold his breath for 45 minutes or whatever, or Ryan Gosling can play piano now, wow: piano, because these are activities their job required them to learn, and even if it wasn't a requirement, the achievement was right there for the taking, and actors are cash and time-rich enough to be able to fritter their waking hours on absurd yet rewarding small-term goals. But actors making friends with animals? Bonding with them and buying them and taking them home and freeing them from servitude because they can't bear to part with them after the cameras stop rolling? This is my good place and you can't hurt me here.

Just know that I spent a good 35-minute train journey trying to adapt Neeson's infamous speech from Taken into a statement about how much he loves horses. I got as far as "I have a very particular set of skills, skills that I have acquired over a very long career, skills that make me a delight, mare, for horses like you" then I abandoned it, but I gave it a good go and that's what really matters. Wait, wait, I've got more: "I will look for you, I will ride you and I will stroke you." Then he puts the phone down and disconnects the call with the horse. Where were we. 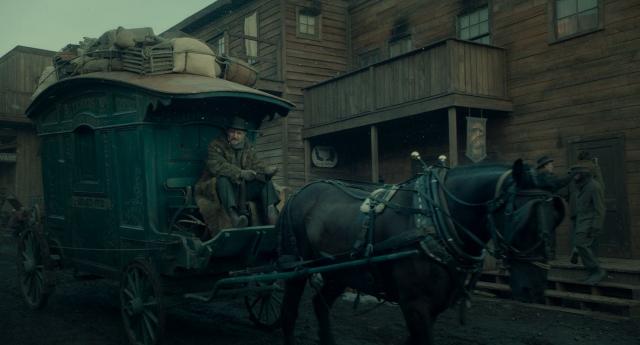 Here's the first quote from the story, buckle up, because this is one hell of a ride.

"
"
"I play a travelling impresario. We filmed in New Mexico. The odd thing is the horse who pulls my wagon knew me."
Notice how this information was offered entirely unprompted. This was not an exchange that was teased out after he was asked a bottom-of-the page, back-up, ‘I'm running out of questions' type question about what it was like working with his animal co-stars. This was Neeson's go-to anecdote from this job. The pivot is immediate. The horse thing was clearly on his mind. He knows it's not a normal thing to share, because he references that it's odd, but he can't help himself: Liam Neeson made friends with a horse and he doesn't care who knows it, in fact he's going to tell everyone about it, everyone he ever meets, that's how he introduces himself at parties from now on: Hi, I'm Liam Neeson, you might remember me from movies including Schindler's List and Taken and also, it's super weird, but this one time a horse recognised me, nice to meet you, do you also love horses?

"
"
"You won't believe it. I'm saying this horse knew me. He actually remembered me from another Western we made a while back."
What's particularly excellent about this claim is that Neeson is already countering accusations of incredulity before the anecdote is even over. The use of the word "actually" is what kills me; Liam Neeson feels your skepticism, but it's totally cool, because put your mind at rest - it actually happened as stated. And that is the final word on the matter, it's been dealt with. You want to argue with Liam Neeson about the accuracy of his claims re: horse memory, be my guest.

"
"
"I love animals. When we worked together before I took special care of him. I fed him treats. Gave him apples."
I just want to take time out to mention how darling this mental image is. Liam Neeson is too precious for this world. We don't deserve him. Liam Neeson has a famous face, a big bank account and, by all accounts, a huge dick; he could be spending his every moment off-set having coke-fuelled orgies with women half his age. But we know him, just like the horse knew him: Liam Neeson is pure, too pure, and cares only for heartfelt connections, be they between a man and a woman or a man and a horse, although obviously in a less sexual way. I would love to be entered into Liam Neeson's special care. I'd eat the apples if that's what it took. I'd do whatever.

"
"
"He whinnied when he saw me. And pawed the ground."
It's important at this point to break the fourth wall to make sure you all realise I am officially iffy on the level of recognition this horse has afforded Neeson. A horse whinnying is not an overtly clear sign of a shared experience, there just hasn't been enough research into this so it's impossible to know for sure. Horses paw the ground quite a lot, I would imagine, I wouldn't necessarily take this as the equivalent of a backslap and a handshake. Unless the horse wrote LEAM NESON in the sand with his hooves I think we can probably write this one off as coincidence. I am not officially disputing either Neeson or the horse's account of the meeting in question, I'm just keeping an open mind, you guys.

"
"
Unless the horse wrote LEAM NESON in the sand with his hooves I think we can probably write this one off as coincidence
In any case, the concept of animals remembering humans and utilising their extremely limited communication abilities to show it is hilarious. The way Neeson tells it, he is of the mind that whinnying and pawing of the ground is the horse equivalent of throwing your arms wide and yelling (in the voice of Brian Blessed) GOOD LORD, LIAM NEESON AS I LIVE AND BREATHE, IT HAS BEEN ENTIRELY TOO LONG MY OLD FRIEND, HOW THE DEVIL ARE YOU. If we're going with the story that the horse definitely clocked Neeson and wanted him to know it, for all we know the interaction might have been the equivalent of a barely perceptible nod, raised eyebrows and a simple "Alright", like two co-workers who pass each other in a corridor just minutes after using up all their small-talk in the lunch room. Like, yeah, the horse recognised him, but it's not like he laid out the welcome wagon. (Although from the sound of it, there was an actual wagon involved, so I can see how there could have been mixed messages).

I imagine we'll soon see a slew of copycat stories trying to capitalise on the good energy generated by the Liam Neeson horse encounter. Sylvester Stallone calls a dog a "good boy" on the set of his new movie: false equivalence. Greg Kinnear claims he has a special bond with a seagull: not even nearly the same thing. Don Cheadle spends 25 minutes posing for photos in his local zoo's otter enclosure: get the fuck out of here with that shit. Kevin Costner claims he remembers a horse he once worked with: THAT'S NOT THE WAY ROUND IT'S SUPPOSED TO WORK, KEV. You're all bloody useless.

The logical conclusion to this magical story is a movie dramatisation about the bond between Liam Neeson and his horse compatriot, sort of like War Horse but without the war. Just a good old-fashioned wholesome tale of brotherhood between a man and his horse: no sex, no swearing, no violence - just love, and friendship and apples. Also the horse can talk, and fly, and together they fight crime. I even have the theme tune ready to go:

So go ahead, world, do your worst. Push through a Hard Brexit. Vote for Trump in 2020. Engage in nuclear warfare with North Korea. As long as we still have Liam Neeson and horses we'll be fine. Unless the mutated horses all go rabid from the radiation and Liam Neeson gets cancer. Oh God, we're screwed.

More:  Liam Neeson  Horses  Analysis
Follow us on Twitter @The_Shiznit for more fun features, film reviews and occasional commentary on what the best type of crisps are.
We are using Patreon to cover our hosting fees. So please consider chucking a few digital pennies our way by clicking on this link. Thanks!