Tonight was one of those nights where there was literally nothing on so you go, look, we can either watch Alan Carr do fake-laughs about cheap alcohol with someone from TOWIE or we can watch Piranha 3DD. I wish somehow I could have closed my eyes and synergised the two together so I could have watched Alan Carr being eaten by angry fish. Here are my notes on Piranha 3DD which are only three years late.


In cinemas, this film was called Piranha 3DD, because obviously it was in 3D (except when it was shown in 2D). When you watch it back on home entertainment, say on DVD or standard TV, it has to be named Piranha DD, which doesn't even work as a title, setting the precedent for the incompetence to come. They should have just called it 'Fish Tits'.
They brought back Paul Scheer for this movie, who died in the last one, but they didn't bring back Kelly Brook. The writers of this film are idiots.
The opening scene of the movie - and I swear I'm not exaggerating this - features a cameo by Gary Busey as a fisherman investigating a floating dead cow full of piranha babies, and he is killed when he lights the cow's farts and it explodes. It's also no exaggeration to say this scene is the movie's high point. Three minutes in. 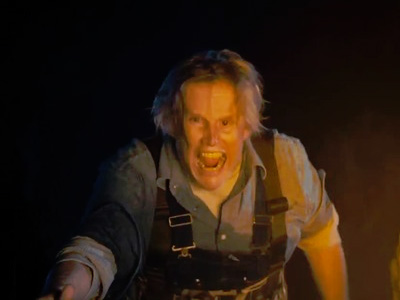 Morning, Gary.
David Hasselhoff stars as himself, and it's supposed to be one of those portrayals that's 'a wink and a nudge' or, my favourite, 'a twisted version of himself'. Except it doesn't really say anything funny or interesting about David Hasselhoff - it paints him as a total psychopath who sits and watches the grisly deaths of hundreds of swimmers and does nothing. He watches a little boy get decapitated and then calls him a moron. I think we all think David Hasselhoff is a bit naff. I don't think anyone thinks David Hasselhoff doesn't value human life. He also stops a slow-motion run to say "Shit, I'm getting old!" which is what counts as meta-commentary now.
This movie was 85 minutes on Film 4. With adverts. It has one main action sequence, where piranhas get into the filtration system of an aquatic theme park. Once they get in, they eat everyone. Then it ends.
Christopher Lloyd reprises his role from the first film as a character called 'Aw Man, Not Christopher Lloyd?'. He's a piranha scientist (!) who has been studying the deadly piranhas to see how deadly the piranhas are. After a scene in which powerful piranhas burst through the planks of a wooden jetty to attack a young girl, we cut to Lloyd's lab, where he demonstrates how dangerous they are by putting a sheet of reinforced steel into a piranha tank and watching the fish tear its way through to get some food. It does this, despite the rather obvious fact that, to let Lloyd put the steel sheet in the tank, the tank has an open top. Piranha science ain't what it used to be. 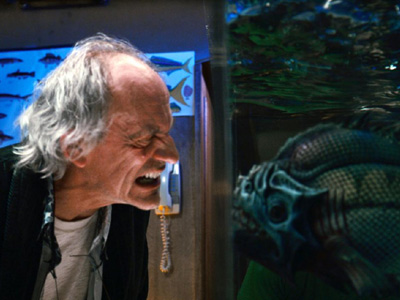 I'm starting to doubt that it's even a legitimate science at all.
I was expecting a fair amount of T&A from a movie named after a bra-size, but Piranha 3DD is basically like a Girls Gone Wild video with a narrative you have to imagine yourself. If you took out the slow-motion shots of bouncing tits and pert asses, it'd be about 35 minutes long. Every other shot sees the camera rammed into a gusset. There's a close-up on a woman's stomach and a tattoo on her pelvis that says 'Fine Dining'. This is a film made by and exclusively for wankers.
David Koechner is in Piranha 3DD as the proprietor of said water park. He meets his end when he trundles along on a small poolside vehicle and somehow manages to get cleanly decapitated by a line of ordinary bunting. His head then flies over a fence and lands in between a woman's boobs, where she gives it a motorboat for some reason. If any of this sounds even remotely entertaining, I am not doing my job.
An early scene sets the tone when Katrina Bowden aka Suree from 30 Rock has a piranha swim up her vagina. Later, when she has sex with her boyfriend, the piranha swims back down her vagina (via her stomach, somehow) to bite the penis of her penetrator. The naked man reels away in shock, grabs a knife and cuts his dick off the first chance he gets - before attempting to stab the fish, or even slit his wrists in a vain attempt to remove himself from the movie. 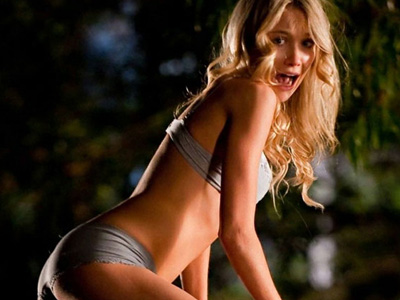 I'm not touching the obvious joke here. Fish? Vaginas? Nope.
Ving Rhames also returns from the original Piranha, minus his legs. Later, he dons metallic legs, onto which he fixes guns to shoot at the fish, because no one went to see Grindhouse so no one saw Rose McGowan do it better 10 years ago. I worry about Ving Rhames. I hope he's okay. Fun fact: he was uncredited for this movie, despite being in it for 10 minutes.
The main character is played by Danielle Panabaker, who looks and sounds like someone you've seen in something but actually isn't. She plays a Sexy Marine Biologist who wears hot-pants and bikinis. She has a romantic sub-plot in the movie where she has to choose between a douchebag cop who sticks his hand between her legs and says "You're still wet!" (she replies: "Maybe a little") and a good-natured but goofball friend who she thought was gay and can't swim but is somehow amazingly proficient at throwing a trident. I was not invested in this sub-plot.
This is what qualifies for 'Trivia' on Piranha 3DD's IMDB page:

"
"
"The filmmakers originally considered shooting this movie on location in Detroit, Michigan."
"
"
"David Hasselhoff was introduced at an Applebee's restaurant in an earlier draft of the script."
"
"
"Deputy Fallon's gun leg was built in a single night."
Well, it certainly is trivial.
There is a character called Big Dave whose sum contribution to the movie is to have sex with a hole in the side of the swimming pool and to stamp in a pile of vomit. I think he maybe has something to do with blowing up the piranhas near the end but I was already thinking about watching the Graham Norton on my Sky box by that point.

More:  Piranha 3DD  Piranha  Kelly Brook  Shit Wastes Of Time
Follow us on Twitter @The_Shiznit for more fun features, film reviews and occasional commentary on what the best type of crisps are.
We are using Patreon to cover our hosting fees. So please consider chucking a few digital pennies our way by clicking on this link. Thanks!