I often look back at old articles on this site, and sometimes I don't recognise the man who ran it. Updates of such ferocious frequency! Four, sometimes five reviews a week! Regular features! Good ones! Critical assessments of films that weren't necessarily within my own sphere of interest! Who was this guy? (Spoiler: it was me). What happened to him? (Spoiler: he had kids).


My eldest boy is a nice age, 4, which means he's old enough to understand the rules of cinema (no shouting, no running around like a helicopter) but young enough so that each trip to the movies still feels like a real treat. I'm writing this from a coffee shop in my local town centre while my 1-year-old sleeps peacefully in his pram, and my wife has taken my eldest to see Beauty And The Beast. Truthfully I'm still not sure if he's in it for the love of film or for the endless tub of popcorn that comes with it, but he's definitely forming a relationship with film and we're all about fostering that. (Somebody has to update the site when I'm dead).

There was a time, pre-fatherhood, when I would go and watch the latest movie from DreamWorks or Illumination or any other animation studio that wasn't Disney or Pixar and I would be awfully sniffy about them. They lack passion, I would say. They look cheap, I would comment. It's not a patch on [insert latest non-Cars related Pixar movie], I would write, before continuing to have zero children and a disposable income. That is the man who has vanished, most likely up his own arse. If DreamWorks animation The Boss Baby had been released five years ago, I reckon that guy would have had something to say. A one-star review. A snarky feature about the 'DreamSmirk'. An article called '11 reasons The Boss Baby is the stupidest fucking movie ever'. What a hero I was. 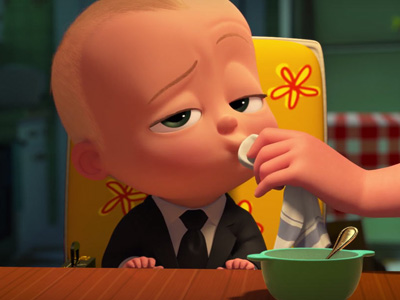 
The movie world doesn't work like it used to. Never mind your million-dollar Super Bowl commercials or ads during X Factor; whack your trailer on YouTube and its intended audience will find it. My home telly has YouTube on it and my boy is quite scarily adept at using it. Really, his input his minimal: the algorithms have him now. Kids these days (said Grandpa Simpson) don't consume content with any particular agenda, they just dive in. Watching my son watching YouTube is fascinating and also great parenting. YouTube will throw up a video in his recommendations, and he'll more often than not go for it. If he likes it, he'll watch it, then a dozen more like it. If he doesn't like it, he'll move on to the next recommendation. If I didn't eventually interject, he'd sit there all day, slowly discovering entire generations of kid culture (albeit remixed and made worse by people who can't edit for shit).

My son's relationship with The Boss Baby started via YouTube. Up came the trailer in a recommendation. The infatuation was instant. I mean, it had a baby in it, who was also a boss. It has a bare bottom that farts talcum powder. It got watched several times, as did every clip, promo and every other ounce of marketing that DreamWorks could squeeze from it. The enquiries began.

Repeat ad infinitum. The days have gone where the film recommendation came from me, the adult film journalist with about 20 years of experience. No, YouTube's all-powerful algorithm now decides what I do on my weekends. For fuck's sake. Picture me, trying to convince a small, uninterested boy to go and see Kubo And The Two Strings when all he wants to see is Trolls again.

"But it's critically acclaimed!"
"Trolls!"
"It's from the makers of Coraline!"
"Trolls!"
"The voice cast includes Matthew McConaughey!"
"McConaughey always phones it in. Trolls!"

So I've now found myself in the pocket of Big Animation, week in, week out. Small children, even mine, do not know what Pixar is, they don't know what the difference between Disney and DreamWorks is, and they don't care. To my boy, all of these films look amazing. Funny animals! Cool music! Farting babies! Popcorn! What's not to like? He wants to go to there.

Eventually, The Boss Baby arrived. There was no avoiding him. Boss Baby fever was so heightened, my son had started working quotes from the trailer into everyday conversation. "Let' just say... I'm the boss," he says, doing a passable Alec Baldwin and an actual DreamSmirk. Just last week, my wife took him to a soft play centre and when he was out of sight, clambering around the mad padded toddler asylum, she was able to locate him because she could hear him saying "Cookies are for closers" to the other children. (I have heard this so often, I have now genuinely forgotten what the original Glengarry Glen Ross line was). He hit peak marketing the other day, when from the back of my car, I heard him say, to himself: "DreamWorks' The Boss Baby". HE ACTUALLY QUOTED THE STUDIO NAME. There is no competing with that.

So we sit in our nice local cinema. He's watching the film. I'm mostly watching him. And honestly, the experience is just heaven. Every gag, even the obvious ones, elicit a laugh from him, sometimes a full blown giggling fit. Which makes me laugh. He quotes the film back to itself. He falls for the plot hook, line and sinker: even the sappy bit at the end, where The Boss Baby goes back to BabyCorp, makes him cry. Which makes me cry. Truly it was an emotional rollercoaster. 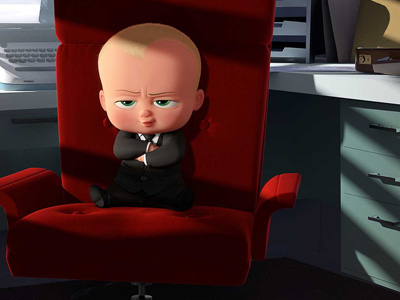 
As I sat down to write my review of The Boss Baby, I realised I could not pass fair comment on any of the film's content whatsoever. My experience with this film was inextricably linked with the experience of my son enjoying it. His enjoyment was my enjoyment. The space in my brain that would usually store witty putdowns or scathing remarks was empty, like most spaces in my brain now are. All I got from The Boss Baby was pleasure, but pleasure that was personal to me. I have no idea how to recommend this movie to anyone else, kids or no kids. No idea.

And it did make me think. Surely, this is how films like The Boss Baby are intended to be enjoyed, yes? I don't think I can ever be the sourpuss who sits watching a film made for children, making snide comments in my notepad while my kids bounce with glee beside me. Look, if you want to go and see a movie called 'The Boss Baby' by yourself as an adult, that is wonderful, but you can't subsequently complain when all the jokes are low-rent gags about farts and butt-sniffing. This is a movie that is literally targeted to 4-year-olds. My son and I fell right into that demographic.

So, what? Movies are made with certain audiences in mind: this is not an Earth-shattering revelation. Film is a subjective art form after all. Working at Disney over the last few years, a company with a hugely broad user base in the billions, has really opened my eyes: every film - even the objectively terrible ones - is someone's favourite film. No one sets out to make a bad movie, but not everyone can make movies that are for everyone. Most animation studios are happy just making movies for certain demographics, and there is not much overlap between sugar-hyped pre-schoolers and professional journalists who power through ten movies a week.

Maybe movies I didn't find funny were aimed at people who don't have a sense of humour? Maybe the horror movies that didn't scare me were made for people that scare too easily? Maybe Adam Sandler's movies are explicitly targeted to the mentally challenged? Maybe. Maybe it's not all about me. It's important to know one's place in the wider scheme of things. For the life of me, I cannot see the point of a broadsheet sending 60-year-old film critics to review a film meant for kids just out of nappies. I'm not suggesting that acquiring a random child for a screening will enhance that person's enjoyment, or that their reviews aren't accurate, far from it. But that seems to me to be intentionally misreading a film's appeal. I mean, baby rusks taste like shit, but you don't see me having shit fits on the Farley's Facebook page.

So now I don't know how to review any film. Help. It's safe to say fatherhood has effectively buried the cynical man who used to run this site (again, to clarify, this is me: I have not murdered anyone). So forgive the lack of a review for The Boss Baby, and forgive my newfound tolerance for apparently sub-par animation. This is The Boss Baby's world now. I'm just living in it.

More:  The Boss Baby  Alec Baldwin  DreamWorks  Animation
Follow us on Twitter @The_Shiznit for more fun features, film reviews and occasional commentary on what the best type of crisps are.
We are using Patreon to cover our hosting fees. So please consider chucking a few digital pennies our way by clicking on this link. Thanks!