Join us as we kick off Jurassic Park Week with a trivia treasure trove: 20 facts about the BEST FILM EVER that you've never heard (unless you've watched the DVDs, read IMDB or follow me on Twitter).


I sure hope everyone else loves Jurassic Park as much as I do, because this week, you're going to see a whole lot of it. To celebrate the fact Steven Spielberg's dinopus is getting a limited theatrical re-release on Friday 23rd September, I decided to dedicate a whole week's worth of nonsense to my favourite film ever. That's cool, right? 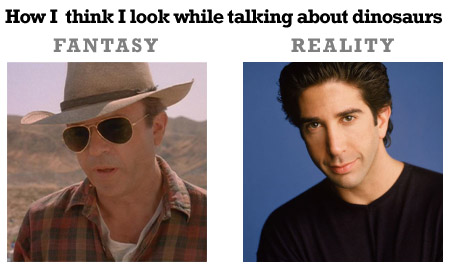 I decided to kick things off with a blast of trivia. Truthfully, if you're a Jurassic Park fan, you may know some, most or all of these facts, but they're all interesting tidbits in their own way. They're great for impressing girls at parties, anyway. Chicks dig dino-dudes.

That fearful roar of the T-Rex was actually a combination of animal sounds, including elephant trumpeting and, bizarrely, penguin mating sounds. The velociraptor squeal is a combo of walrus grunts and dolphin squeaks. Damn nature, you scary!

Animator Phil Tippett had his parade pissed on by Dennis Muren's digital effects. When the stop-motion man was shown the CG dinos, he told Spielberg "I think we're extinct". Tippett's team kept their jobs, and his line was given to Ian Malcolm.

The kindly veterinarian Dr Harding, who tends to the poorly triceraptops, is actually legendary Hollywood produced Gerald R Molen. You can also see him playing a doctor in Rain Man and playing an FBI Agent in Catch Me If You Can.

Believe it or don't, but some shots of the velociraptors (particularly in the kitchen scene) are actually of animators wearing partial rubber suits. In Jurassic Park III, animators were even able to wear 'raptor pants' for shots of the creature's legs only.

Spielberg got the idea for the vibrating water cup after seeing his rearview mirror shake while listening to Earth, Wind & Fire. It was tricky to pull off, but FX bod Michael Lantieri stumbled on the solution by noticing the effect playing the guitar had on his glass. 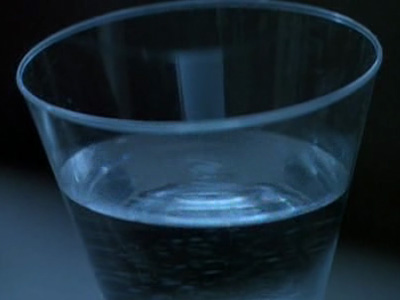 Ever wonder why the triceratops is sick? According to Crichton's book, it would eat small rocks to aid digestion, then regurgitate them. Those poisonous Lilac berries? They were eaten and barfed too, which is why they aren't found in that big pile of shit.

Hurricane Iniki ravaged the Hawaiian island of Kaua'i, where the movie was shot, but Richard Attenborough managed to sleep through it. When questioned how by Steven Spielberg, Dickie replied: "Dear boy, I survived the blitz!"

The helicopter pilot that rescued the cast and crew from Hurricane Iniki was Fred Sorenson, whose sole movie role was that of Jock, the seaplane pilot who rescues Indiana Jones at the beginning of Raiders Of The Lost Ark. Everything about this is awesome.

Many of the depictions of dinosaurs in Jurassic Park have since been proven to be inaccurate. For example, velociraptors were only the size of turkeys, which means that weird little boy/girl that pissed off Alan Grant at the beginning was kind of right.

Oh, that weird little boy who Alan Grant terrifies at the opening Montana dig? Actor Whit Hertford, a man who looks like this now. He also voiced a dinosaur in The Land Before Time III: The Time Of Great Giving. He's still weird. 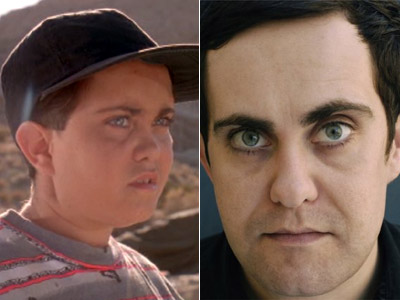 Is this guy reading anyone else's thoughts too? Just mine? Shit.

Considering the absolutely mastery of computer effects in Jurassic Park, it's a bit of a dumb goof, but the 'webcam' which Nedry uses to communicate with the dock is actually just a Quicktime video. You can even see the time indicator moving as it plays.

If you thought Ian Malcolm was a better match for Ellie Sattler than Alan Grant, then you might be right. Jeff Goldblum and Laura Dern got engaged after Jurassic Park, but split before Goldblum was recalled for The Lost World. The essence of chaos!

One of the most derided moments of the film is the archaic and totally fake-looking "UNIX system" that Lex recognises on the park's computer. In actual fact, it was a real browser called Fsn ('fusion') and was a 3D file management system. It sucked.

The ILM special effects weren't only used to create dinosaurs. In the scene where Lex falls through the ceiling tiles, Ariana Richards' stunt double looked right at the camera. ILM digitally pasted the actress' face over the stuntperson in post-production.

William Hurt turned down the role of Alan Grant without reading the book, because he is an idiot; Harrison Ford also dropped out of the running. Sean Connery was sought for the role of Hammond, while Robin Wright-Penn was almost cast as Ellie. 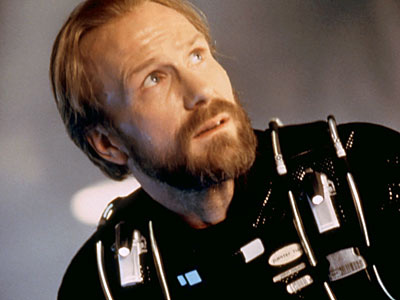 Sorry, William. Lost In Space was a brilliant movie too. (*sniggers*)

Scenes that were cut included the T-Rex terrorising a river ride (amalgamated into JPIII) and a scene with a pterodactyl, cut for budgetary reasons. Lex was to ride a baby triceratops, but the scene was cut and the model used in The Lost World.

Ever noticed how Malcolm wears black and Hammond is always in white? It's no accident: the two characters are diametrically opposed, one a realist, the other a dreamer. Spielberg saw himself as the fantastist, with Crichton the nagging voice of reason.

If it wasn't for Jurassic Park, we might have never seen ER on TV: Spielberg and Crichton originally met to discuss an ER movie. Same goes for the Star Wars prequels, too: George Lucas wept upon seeing the ILM footage and set to work on the new trilogy.

In Michael Crichton's book, he mentions that the park's audio tour is narrated by Golden Globe-winning actor Richard Kiley. In Spielberg's film adaptation, Kiley really was hired for the voiceover and can be heard in the Jeep ("We spared no expense!").

Jurassic Park originally had a different ending, where Grant shot one raptor and then used a mechanical T-Rex skeleton in the foyer to kill the other. Spielberg realised he needed one last scene with the T-Rex, and added the iconic finale. But how'd he get in there? 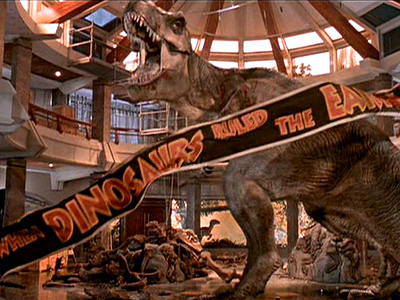 Because DINOSAURS, that's why.

Sam Neill's real name is Nigel, so technically he has three first names.

More:  Jurassic Park Week  Jurassic Park
Follow us on Twitter @The_Shiznit for more fun features, film reviews and occasional commentary on what the best type of crisps are.
We are using Patreon to cover our hosting fees. So please consider chucking a few digital pennies our way by clicking on this link. Thanks!