Leaked images of toys from the Vienna Toyfest 2012 have revealed some fairly shocking spoilers for The Avengers, including the surprising news that Chris Evan's Captain America character will be made entirely out of plastic and will allegedly only be three inches high.


While set security was tight and the marketing has given little away, some major spoilers for The Avengers have been revealed by leaked images of the official tie-in toys. If the pictures are to be believed, the character of Steve Rogers has been given a major overhaul in Joss Whedon's new movie, and will be constructed entirely out of cheap plastic, and not flesh and blood as in the original Marvel comics.

It's also difficult to gauge scale from the image below, but it appears the Captain America of Whedon's Avengers may only be a few inches high, as opposed to six feet and two inches as in the character's bio. 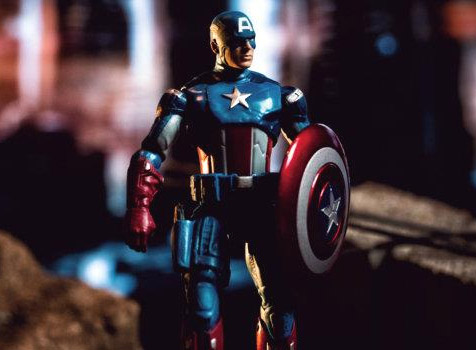 It is not yet known how the new tiny plastic Captain America will affect the dynamic of The Avengers, all of whom are typically portrayed as regular-sized humans, with skin, teeth and hair. The source who leaked the pictures says: "This new plastic Steve Rogers beggars belief. How can Captain America be expected to fight Loki alongside The Avengers when he's in danger of being stepped on and crushed? I don't even want to know what the Hulk could do to him. And how is his new tiny plastic shield supposed to do any damage to his enemies? It's a catastrophic redesign."

Chris Evans took to Twitter after the pictures leaked to reassure fans that the movie was in good hands.

News of Captain America's surprising reimagining has not been received well by comic-book fans, who have been quick to express their dissatisfaction on online messageboards and social media sites.

"
"
"Steve Rogers is to be made out of plastic WTF? He's Captain America not Plastic Man THANKX HOLLYWOOD YOUVE RUINED tHE aVENGERS!!!" - IGN user 'JeremysIron'
"
"
"OMG captain america to be 3 inches high in new avengers movie. what a disgrace, no way im watching this movie now #whedonfail" - Twitter user @fartknocker
"
"
"There's no way this is Whedon's doing. This has studio fingerprints all over it - it's clearly just another way to sell more Avenger$ toys." - YouTube commenter SmugDouche75
Joss Whedon has so far refused to comment on the rumours of the new plastic Captain America, which is thought by many to be a remnant of a previous script by Michel Gondry.

The three-inch Captain America might not be the only shocking character change in Whedon's new Avengers movie; the same Vienna Toyfest source said he also saw unsubstantiated designs for the new Hulk, which he claims was furry, green and 'cuddle-sized'.

More:  The Avengers  DUH SATIRE
Follow us on Twitter @The_Shiznit for more fun features, film reviews and occasional commentary on what the best type of crisps are.
We are using Patreon to cover our hosting fees. So please consider chucking a few digital pennies our way by clicking on this link. Thanks!