Let me save you the trouble of watching American Pie 4

Plot details have leaked for American Reunion, the third (proper) sequel to American Pie. Plot details? I wipe my arse on plot details - I'll leak the whole damn movie for you!

"
"
"The whole gang are returning to East Great Falls for their ten-year Highschool reunion (made possible thanks to Facebook). [Of course - Ed] They'll come near and far to remember the good times - only to be faced with the frightening realization that they're no longer young teenagers."
What hijinx could await our pastry-based friends after all these years? I'm laughing just thinking about it! Along with the above plot outline, a brief character synopsis also leaked, which you can see below in bold. I've gone ahead and sketched out everyone's character arcs for you underneath, so you don't have to waste your money.
Jim and Michelle

Jim (Jason Biggs) is still married to Michelle (Alyson Hannigan), but his next-door neighbour has a crush on him â€" and her long-term boyfriend isn't happy about it. Meanwhile, his sex tape with Nadia (Shannon Elizabeth) has gone viral on YouTube.

Stifler's (Seann William Scott) life has gone down the drain â€" he's unhappily working as a temp, and isn't getting laid much. He avoids going to the reunion. At one point, he sleeps with Laurie, a "former hottie" who's gained weight.

Resolution: Becomes a gigolo, the one job he's good at, in order to forget the abject horror of sleeping with someone who has gained weight. Being around his former friends makes him realise how "awesome" he really is. Makes crude sex jokes. Possibly ingests a bodily fluid and/or faecal matter. Learns nothing.
Finch

Finch (Eddie Kaye Thomas) is an "international traveller" and will be scoring with Trish, a bartender who used to go to band camp with Michelle.

Oz (Chris Klein) is a big shot with a Malibu mansion and a girlfriend who seems to be a gold-digger.

Resolution: Dumps the gold-digging girlfriend when he meets up with Heather, his old high school sweetheart. Gives his money away to Stifler when he realises true love means more than statues and fast cars. Will likely 'toss a ball around' at some point. Still incredibly smug.
Heather

Heather (Mena Suvari) is dating a middle-aged surgeon who tries to act younger than his age.

Resolution: Dumps the middle-aged surgeon after he makes a Facebook 'poking' joke about a decade too late. Falls for Oz, who has finally learned responsibility. Has two minutes and 30 seconds of screen time.
Jim's Dad

Jim's Dad continues to meddle in the affairs of people who are at least 40 years his junior, to the suspicion of no one.

Resolution: He is finally arrested.
The rest 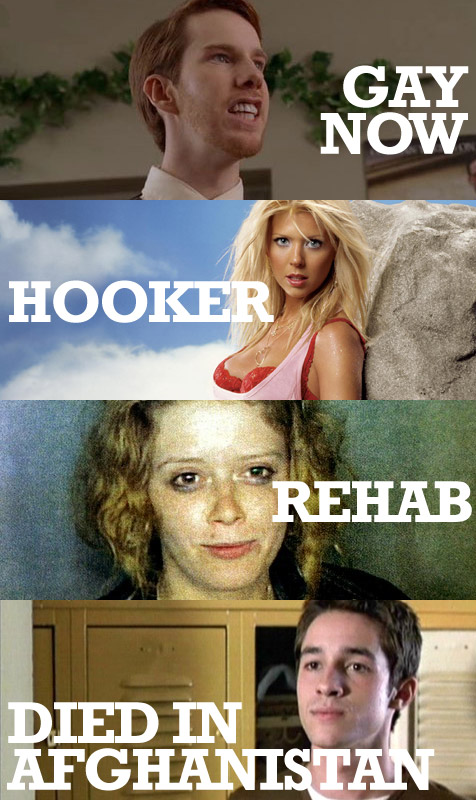 More:  American Reunion  American Pie 4  American Pie  Seann William Scott  Jason Biggs
Follow us on Twitter @The_Shiznit for more fun features, film reviews and occasional commentary on what the best type of crisps are.
We are using Patreon to cover our hosting fees. So please consider chucking a few digital pennies our way by clicking on this link. Thanks!