It's official: part two of this new feature means it definitely qualifies as a 'regular', although we haven't quite pinned down how often we'll be catching up with the Marvel movies - it basically comes down to when ITV2 get round to showing the next one. And as nobody came up with a better title, it's time to HULK SMASH the 'Read full article' button and enjoy the next chapter of (*winces*) Marvel's Cine-CHAT-ic Universe: The Incredible Hulk.


Ed: I don't know enough detail about the rest of the MCU to comment on the continuity but as a standalone film it works very well I think. I like that they do the gamma poisoning bit in montage so they don't repeat the whole thing from Ang Lee's Emo Hulk, and I especially like Norton's humanity through the whole thing. You get the sense that changing into the Hulk is physically painful and traumatic, not just inconvenient, and he makes me care that he's in pain.

That whole thing about Tony Stark being a more interesting character than Iron Man holds here too. Plus Banner spends the whole film trying not to be a superhero, essentially trying to deny the audience what it wants, which goes a step further than the usual narrative about trying to come to terms with the responsibility. I can't remember why Norton left/got binned. Was it the usual "doesn't play well with others" thing?

Matt: I think this was something of a passion project for him. He wrote the original script on which it was based and even directed himself in some scenes too, and it was originally a slower, character-focused story (as the ton of deleted scenes will testify). Then he got pissed off when Marvel locked him out of the edit room to cut the film into more of a faster-paced action film that, y'know, kids might want to see. That includes cutting a scene in which Banner sticks a gun in his mouth and pulls the trigger. Who would have thought Marvel might not want that in the film. What do you guys think of Norton's casting in the film, especially compared to Ruffalo?

Ali: It's easy to think of Edward Norton being miscast after the fact, when everybody is used to nice old warm engaging Mark Ruffalo, but even at the time I remember thinking he was an odd duck. Banner is supposed to be a bit dweeby and nerdy but Ed Norton is really ripped. I didn't believe that he could do a science. Also the character of Banner is really weirdly written (or edited at least) and doesn't have any proper dialogue for about half an hour.

Matt: I remember when he was cast, thinking that it was a perfect choice because he basically already looks exactly like Bill Bixby. And he's absolutely fine in the role, but overall ends up being a bit unremarkable just because of how well suited to the part he is.

Becky: I get that Norton had the look down pat, but I can't buy him as a genius scientist. And I'm not interested in the introspective side he was trying to bring to the role: no one watches Hulk for Banner, don't @ me. 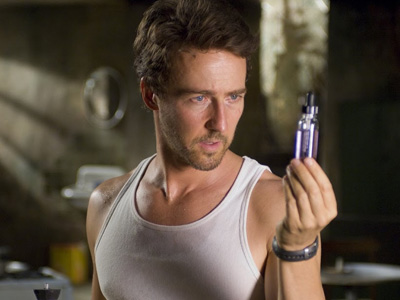 Maybe you should try and invent the CURE FOR BEING AN ASSHOLE.


Ali: I think the makers of The Incredible Hulk got caught in that weird time period, after everyone was on board with reboots but before it was normal for the cycle to be so small - hence the opening credits that felt it necessary to skim the origin stuff, and the utter lack of explanation of Bruce and Betty's relationship. It's economical storytelling and I appreciated that at the time, being neither one thing or the other, but now as a part of a wider whole, it feels so out of place and really disconnected from the rest of the MCU.

Becky: It's really hard to believe that this was even released in the same year as Iron Man (and The Dark Knight), let alone intended to be part of the same universe we know and love today. The tone is so uneven, there are like five jokes in the entire film and all of them feel utterly out of place.

Matt: I don't know. I like the psychological side of the character. Of two personalities fighting for time in the same body. This film touches on it a little with this idea that Banner is trying to learn to 'control' Hulk, even though he does nothing really to accomplish that, it doesn't really go anywhere and then the final shot kind of implies that he succeeded without really showing how.

But this film seems to focus more on the physical change instead, which isn't as interesting to me. In particular, the heartbeat thing is a nice device to have a ticking clock element that naturally emphasises tension, but it reduces the battle between Banner and Hulk to a simple biological difference rather than an emotional state. Plus it makes no fucking sense when Banner spends half the movie sprinting everywhere.

Ali: The tone is so dark it's distracting - it makes for a more interesting movie, having Hulk encased in shadows, like an actual movie monster - but man, it feels so out of step with the rest of the movies that'd follow. I think between this and the early Wolverine movies, they really nailed the whole 'angry man yelling at the sky' thing.

It's actually quite an enjoyable movie in isolation, not at all the disaster I remembered, but it doesn't stand in line with the rest of the family. It's the outcast. It's the Tiffany Trump of the Marvel Cinematic Universe. 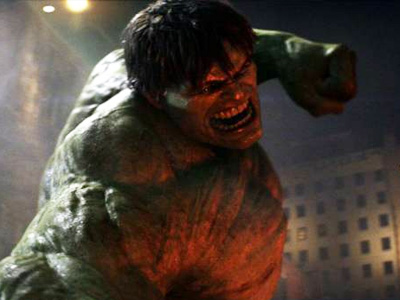 "Hulk SMASH man who give him STUPID HAIRCUT."


Ed: It's a nice reminder of a time when they used to do a climactic battle in a city without demolishing the entire place, before they upped the ante so much they couldn't dial it back again. Although it's two big (and rubbish) CGI monsters twatting each other which is a bit dull, and there's no reason given why Hulk wins it: it's set up as if the only way to win it will be to kill the Abomination, but then a bit of strangling with a chain seems to do the trick and he just taps out. They don't risk your sympathy by having Hulk deliberately kill. (Man of Steel's ending is pretty brave by comparison.)

So the ending's a bit weak, and other than his little grin hinting that he's learned to control it, the story hasn't moved on much by the end: he hasn't cured himself; he's not with Betty. There's a sense we haven't progressed much and it's another origin story without completely redoing it.

Matt: A couple of things Ed mentioned there as positive points I actually think harm the film. I think it's difficult to root for Banner in this film because we don't really want him to find a cure. We've all turned up to see a Hulk movie, so we want to see the Hulk. And the fact that we don't see any dangerous destruction or negative impact of this 'monster' at all (Hulk only ever does good stuff when he appears) means that we are never given a reason to fully side with Banner and understand why he wants him gone.

Ali: The worst bit is how shite the Hulk looks. He's got a little wiggy mop top and he's always grinding his teeth. And he's TOO green. It sounds weird to say, but he's like a big ol' angry pickle.

Becky: I agree with Hulk looking like shite: apparently the floppy hair was meant to give the Hulk more character, but actually makes him look like a male model from the '90s. And The Abomination just looks like a moving pile of snot.

Ali: I just laughed thinking about that scene where Hulk gets scared by lightning and shits himself and then turns around and screams at the weather.

Matt: Isn't that shortly after he bumps his head in the cave because he doesn't know how tall he is? The Inelegant Hulk. 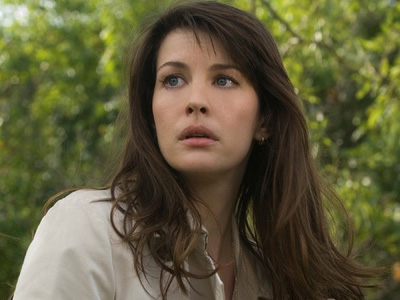 
Becky: It's not usually a thing that presses my buttons, but all the secondary characters are so under-written it's frustrating. Just like Pepper, Betty has to act as the sexy nanny trying to calm down the angry toddler and we have no sense of her characterisation. She's a lover, mother and a stone cold bitch who dumps her boyfriend the moment her ex rocks up. Tim Roth's Blonsky randomly shouts dialogue and only appears to want to take on The Hulk because of his toxic masculinity.

Ali: Tim Roth as a Marvel villain, eh? What a different time this was. I did appreciate that brilliant scene where William 'Thunderbolt' Hurt yells all sorts of nonsensical shit into his walkie talkie and they just bombard Hulk with a whole aircraft carrier's worth of military hardware. There's a tooled-up Jeep that barrels over a grassy knoll and comes within about 0.5mph of absolutely fucking eating it bumper first into the ground.

Becky: Tim Blake Nelson feels like the only person who's been well cast and out of everyone should have been given another shot at being in the MCU.

Matt: I actually don't really understand Tim Blake Nelson in this film. When Bruce is chatting to the mysterious Mr Blue, you get the impression he is a revered scientific expert. But then it turns out to be Tim Blake Nelson, a comic relief geek who then suddenly becomes cartoonishly villainous. I don't think his character belongs anywhere near the MCU personally.

Becky: He looks like the only one actually having any fun in this film. Everyone else is just taking it so seriously.

Ali: It definitely feels like the last of a certain kind of Marvel movie, one made with its own specific recipe. It's dark where most other Marvel movies are light, gloomy where most others are cheery, and it really, really makes you wait for its first proper action scene, whereas nowadays if you don't get at least one overblown CG spectacle in the first three minutes you get walk-outs.

So I want to congratulate it for that, but at the same time, it doesn't really deserve any praise, because it probably wasn't intentional. It's just... different. Not good different, not bad different, just a break from the norm. It suffers from a fairly unique problem, much like The Amazing Spider-Man, in that it has recently been shown up for being inferior by a way superior execution of the character, but then that's not entirely fair, because the Ruffahulk (and, indeed, Tom Holland's Spider-Man) had every leg-up to get it right. I don't know. Hulk SHRUG.

More:  Marvel  Cinechatic Universe  The Incredible Hulk  Hulk  Marvel  Edward Norton  Louis Leterrier  William Hurt  Liv Tyler
Follow us on Twitter @The_Shiznit for more fun features, film reviews and occasional commentary on what the best type of crisps are.
We are using Patreon to cover our hosting fees. So please consider chucking a few digital pennies our way by clicking on this link. Thanks!