Maybe the real Love Island is the friends we made on the way...

Love. Above all things I believe in love. Love is like oxygen. Love is a many splendored thing. Love lifts us up where we belong. All you need is love. Every time I say it’s going to be different, I won’t get in too deep. Don’t fall for it, Becky: it’s infatuation, not love. Empires have fallen, glacial caps have melted and I’ve been oblivious to it all. I’ve fallen for the charms of Love Island. I've gone full factor 50.


The summer of love has been long and winding, soundtracked by slowed down low-fi versions of 90s dance hits and Foo Fighters' Learn To Fly. We started off with ten strangers, and now thanks to some highly cut swimwear, I know all of the inhabitants of the villa better than my own family. Apart from that guy that went out first. And that posh girl that no one liked. As the sun sets on the world’s most immersive branch of Superdrug, I hope there was at least some thrush cream amongst the fake tan, silk kimonos and personalised water bottles.

If, unlike me, you’ve been out enjoying the summer and actually living your life, here are all the things I’ve learned, written down so you can read them and then go back to adult stuff like paying taxes and watching Netflix.

Back in my day, during the early days of courtship you’d go for a turn around the room during a fancy ball (read: sweaty disco), and then after maybe six or eight weeks one of you would mumble, “D’yer wanna go out, then?”, and that was it. These days, it’s a far more complex affair. There is a whole new level before going steady. I believe this is called “seeing each other”, but in the Love Island villa, they are literally the only other people around, so they’re all you can see.

In the real world, this can last for a few weeks but crucially, this is not the same as “going out” because this stage is non-exclusive, so if you’re “seeing” one person, you can also “see” other people. On Love Island, if this happens this is “having your head turned”, which even though you haven’t declared your relationship, is as shocking as an affair discovered after 50 years of marriage (see Michael and Jordan, whose head turnings made them the bad boys of this year’s Island). 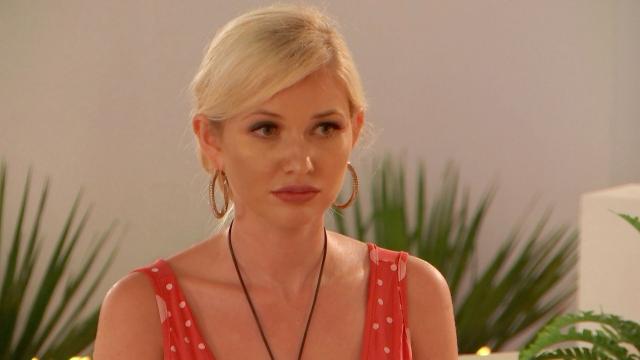 "Everyone always looks so happy, don't they?"

Should you want to take your relationship further and only “see” one person, you have to ask them in the most lavish and romantic way possible, with flowers and champagne and getting your friends to stand in the shape of a heart. You know, just like a marriage proposal. BUT - you’re not getting married! That’s like twenty more steps down the line, after booking the “will you move in with me?” mariachi band and the “we’ve just bought our first hoover” tandem jump. Slow down mate, you sound like a proper melt.

On paper, it sounds perfect

Melt. Bev. Salty. Do Bits. While it sounds like I’m reading menu headings from an East London hipster diner, these are actually different ways of calling someone an idiot, attractive, agitated, and having the sex. Oh my god, I am so old. There’s probably a word that the Islanders would use to describe me and I’m too decrepit to understand it.

There’s no such thing as too much advertising

Day-glo thongs from ISawItFirst.com aside, as I sit here with my laptop like I’m Carrie-fucking-Bradshaw, I can’t help but think; what was the most annoying thing about Love Island - the Uber Eats ads or the ones with a strange young man stealing his girlfriend’s moisturiser for a weird challenge?

Tommy and Molly-Mae were robbed

Amber may have gone on the bigger journey, having found the strength to turn down Michael after his head eventually turned back to her after the rest of the group voted off Jourdan, but Thomas Furious and Molly-Mae were just totes adorbs. It is what it is.

More:  Love Island  ITV2  Caroline Flack
Follow us on Twitter @The_Shiznit for more fun features, film reviews and occasional commentary on what the best type of crisps are.
We are using Patreon to cover our hosting fees. So please consider chucking a few digital pennies our way by clicking on this link. Thanks!