The late Stanley Kubrick is often considered to be a visionary genius filmmaker, who by all accounts was also an obsessive pain in the arse. But that didn't stop Hollywood's biggest names wanting to work with him, because he was a visionary genius filmmaker. And thank God he was such an obsessive, hoarding decades of research and correspondence, otherwise the new exhibition celebrating his films at The Design Museum in London would have been pretty barren and that would have been well embarrassing.


I guess I'm the site Kubrick Guy. Ed has Rocky, Matt has superheroes, Ali has never seen Robocop so I don't even think he likes films. Becky is an unknown, but it's safe to assume I know more than her about Kubrick because I know more than anybody about Kubrick, and can talk at great rambling length about any facet of his life, films and interpretations of his work - especially the crazy theories - as my poor friend Ben found out when he visited the excellent Stanley Kubrick exhibition at The Design Museum with me today.

The Design Museum is an impressive pointy building halfway down Kensington High Street, which is perfect for telling people you're going to Kensington so they think you've got money even though they know you. It looks like it should contain art but as the name implies it's actually a museum about design, which is a good fit with Kubrick's renown for precision, craft and practicality.

In the lobby is this, which if I'm not mistaken was Stanley Kubrick's car: 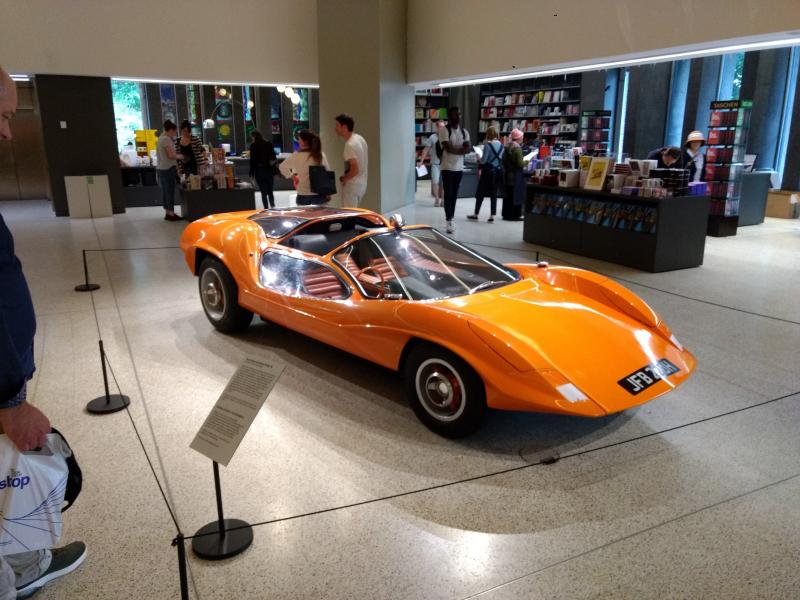 It wasn't really. But just imagine him driving it!

You enter the exhibition through this striking bank of parallel screens looping classic Kubrick one-point perspective shots, highlighting his meticulous framing. Being up close to a life-size David Bowman is quite something. If you wait a bit the other visitors walk on and you get all the time in the world to capture your most perfect centrally-aligned photo: 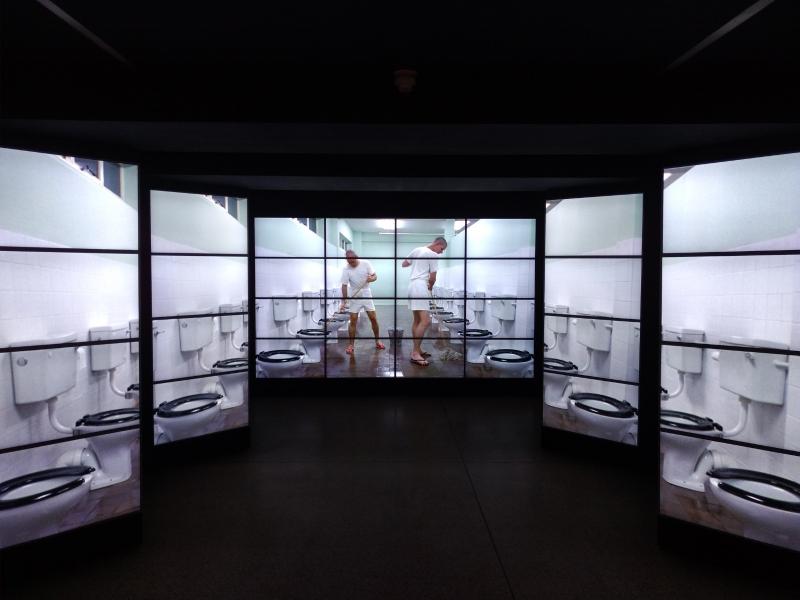 The first section you come to is an impressive collection of scripts, equipment, posters and other miscellaneous artifacts Kubrick owned or touched. They've even got his Best Visual Effects Oscar for 2001, which is *whispers* in a flimsy glass box that could be smashed easily.

Setting the tone further are several annotated scripts for unfinished projects, including this one for his film about Napoleon, called imaginatively 'Napoleon': 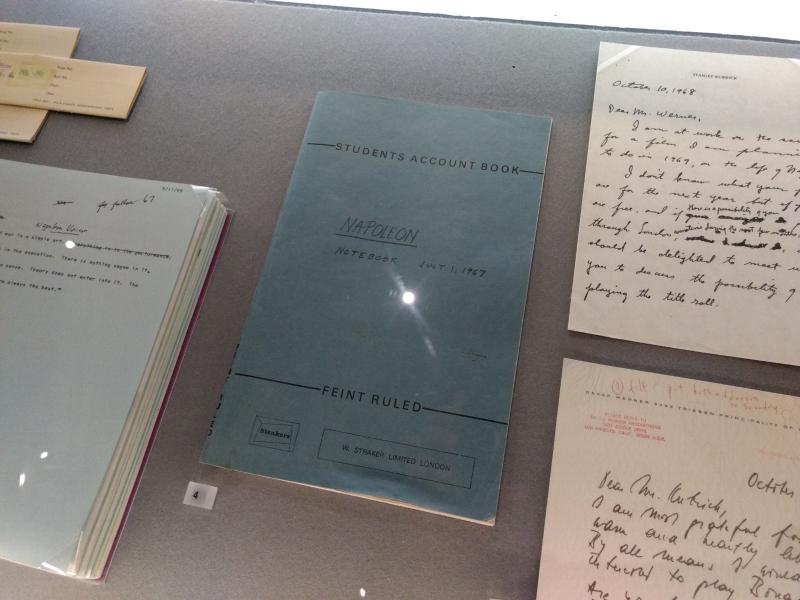 And this draft of what I assume was a Steven Seagal vehicle, 'Sudden Death': 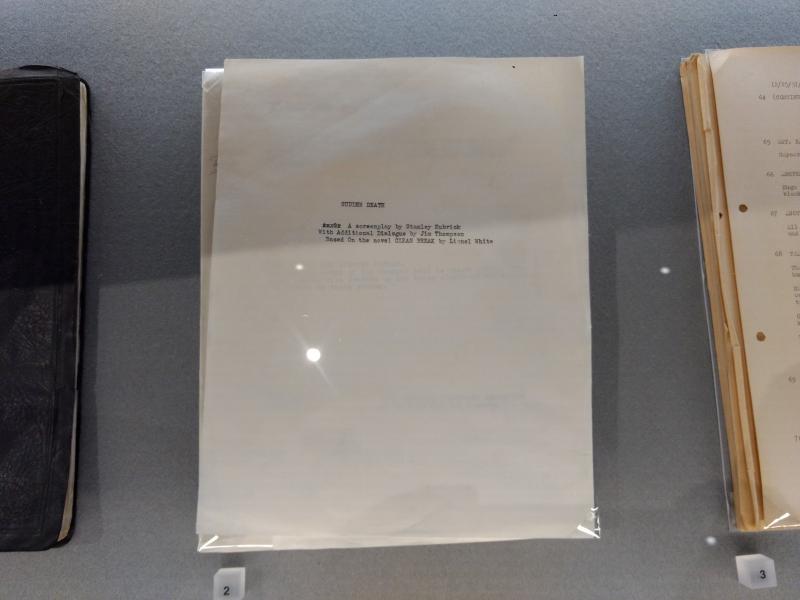 Passing through cabinets of lenses and travel cases (which are nice to have but not terribly thrilling), you come to a section condensing Kube's pre-Lolita black and white features into one easy to bypass corridor - because let's be honest, nobody is here for Killer's Kiss or The Killing. 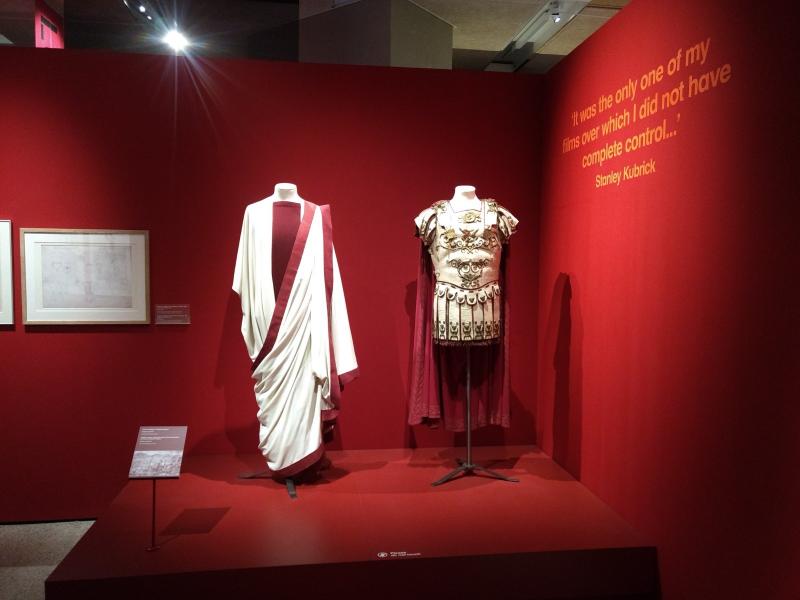 A little disconcerting that the most notable memorabilia so far is some smelly old men's dresses from Spartacus. When I went to Colchester Castle last year they had a computer game where you could steer a full-size chariot against some roman bot racers. Nothing like that in the Stanley Kubrick exhibition yet.

The first dedicated area to one film, and the start of our tour of Kubrick's most memorable works proper. This was mainly some flags and a few helmets. See: 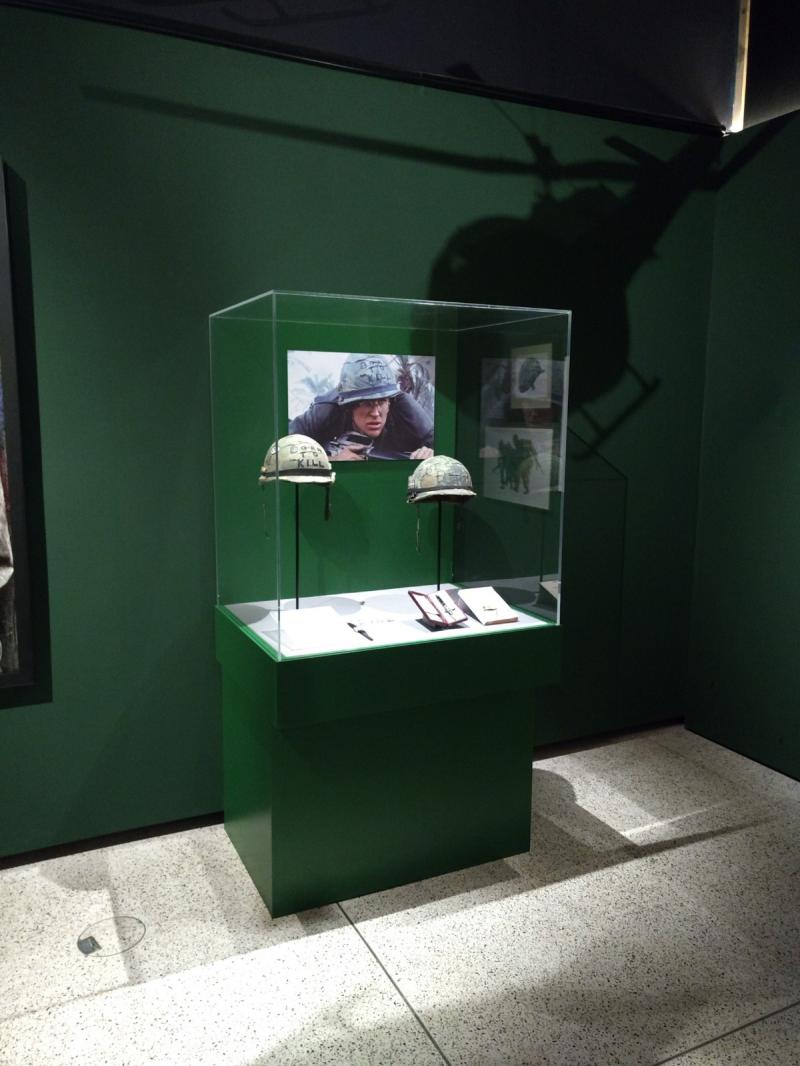 One of the lesser late Kubricks in my opinion. He may have been a master of shot composition in a studio, but outside with helicopters buzzing about and the elements to contend with his touch falters slightly. Still, a compelling tale of dehumanisation and the Nature of Man (Who Is A Shit).

This was the exact moment I realised bringing my four year old out for a fun day with daddy would have been a mistake. Although to be fair it's not anything he hasn't seen before. 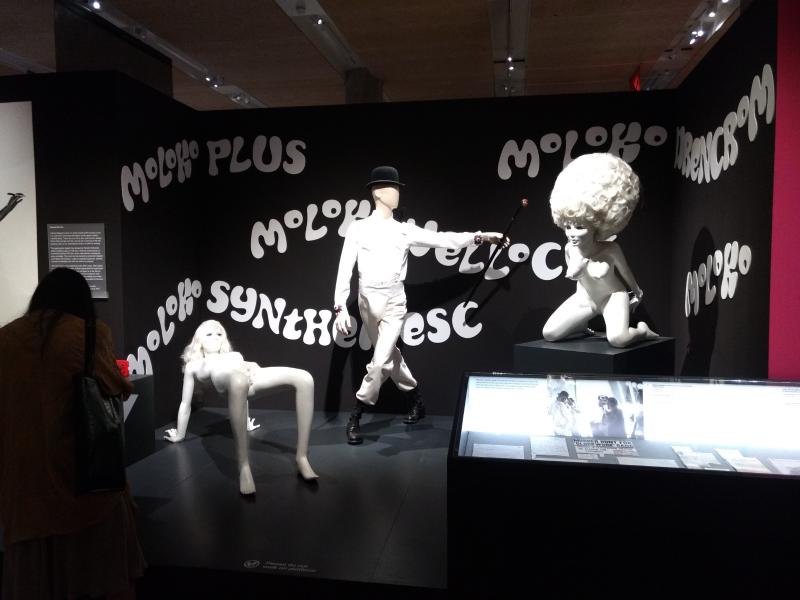 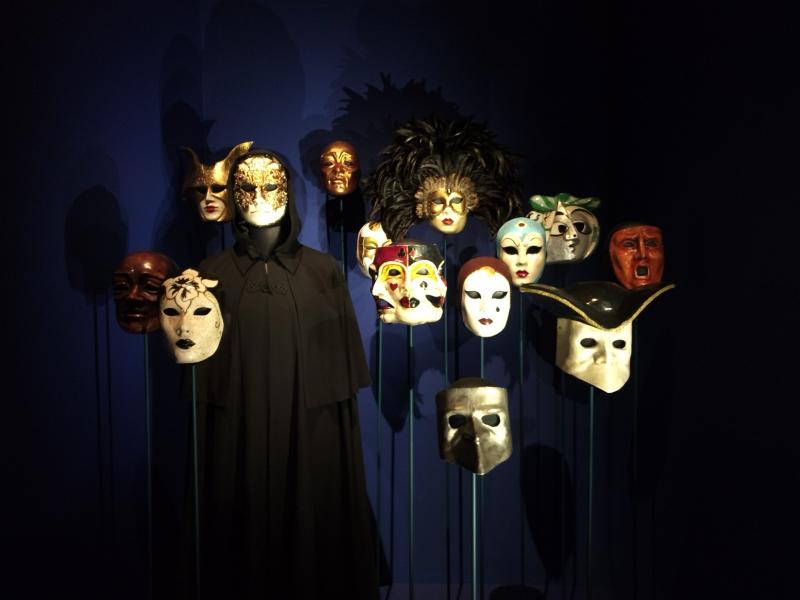 According to a few oral histories of the film's production, the ritual masks were scrambled from several suppliers at short notice due to the amount required. Which kind of puts paid to conspiracy theories around any deep occult meaning - they just needed as many as they could get so raided fancy dress shops. I feel a lot of the batshit Kubrick interpretations are people fitting their own concepts into his work. As cerebral as Kubrick was he knew he was making a commercial product, and so had to wrap filming at some point. It just so happened he was also adept at creating mythologies with enough ambiguity to give the imagination space to poke about in, and somehow that got mapped onto set design and costumes. 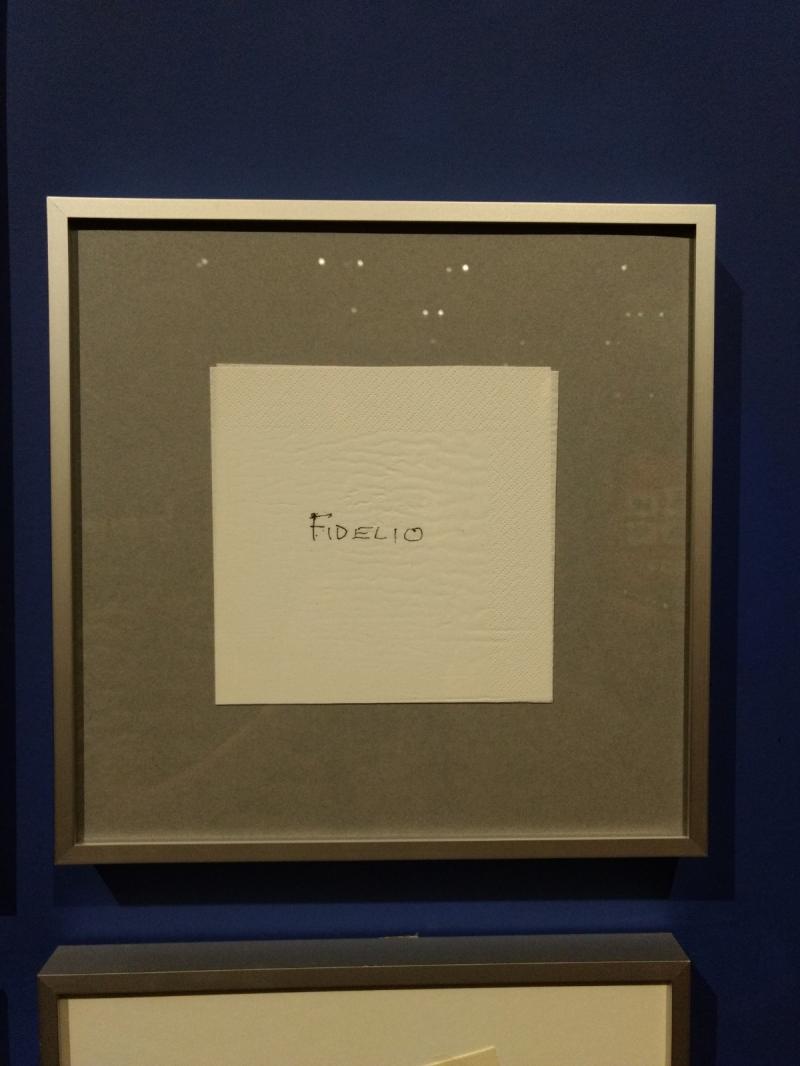 Oh my God can you believe they got *the* actual napkin Nick the Pianist wrote the sex mansion password down on? I'm not being sarcastic. Why do they have this? Whose idea was it to keep it? Seriously?

Aww yeah here we go, the big guns. Some... girls dresses. I told my friend Ben that the actresses weren't really twins, but were simply sisters. I knew as soon as the words left my mouth I was recalling a wrong fact. He seemed to believe me, probably not even listening because that's an insanely boring bit of trivia to recall anyway, even if incorrect. 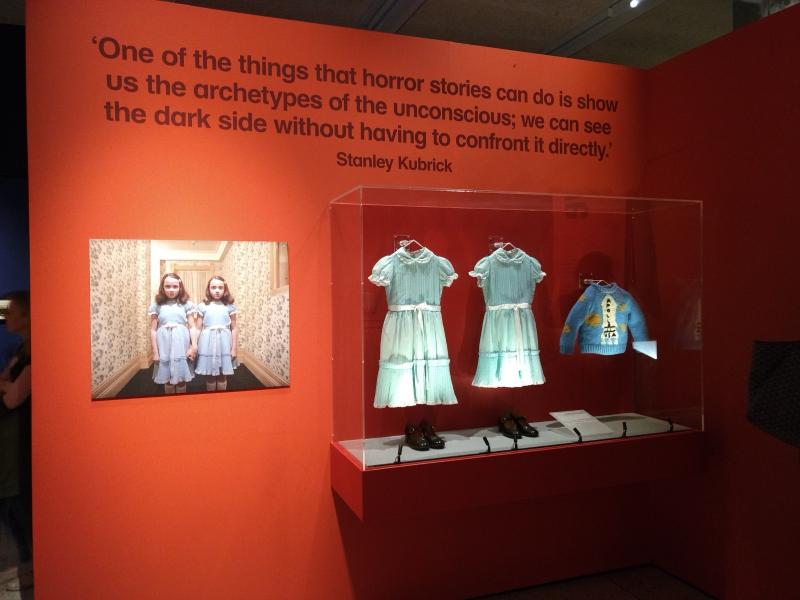 The Shining is unique among Kubrick's films for venturing into supernatural territory. Even so, the strength of the story lies in how the family react to each other whether influenced by ghosts or not. It's a testament to Kubrick's ability to take some heady ideas and make the focus still intimately human, playing on deep-seated fears about family and trust. 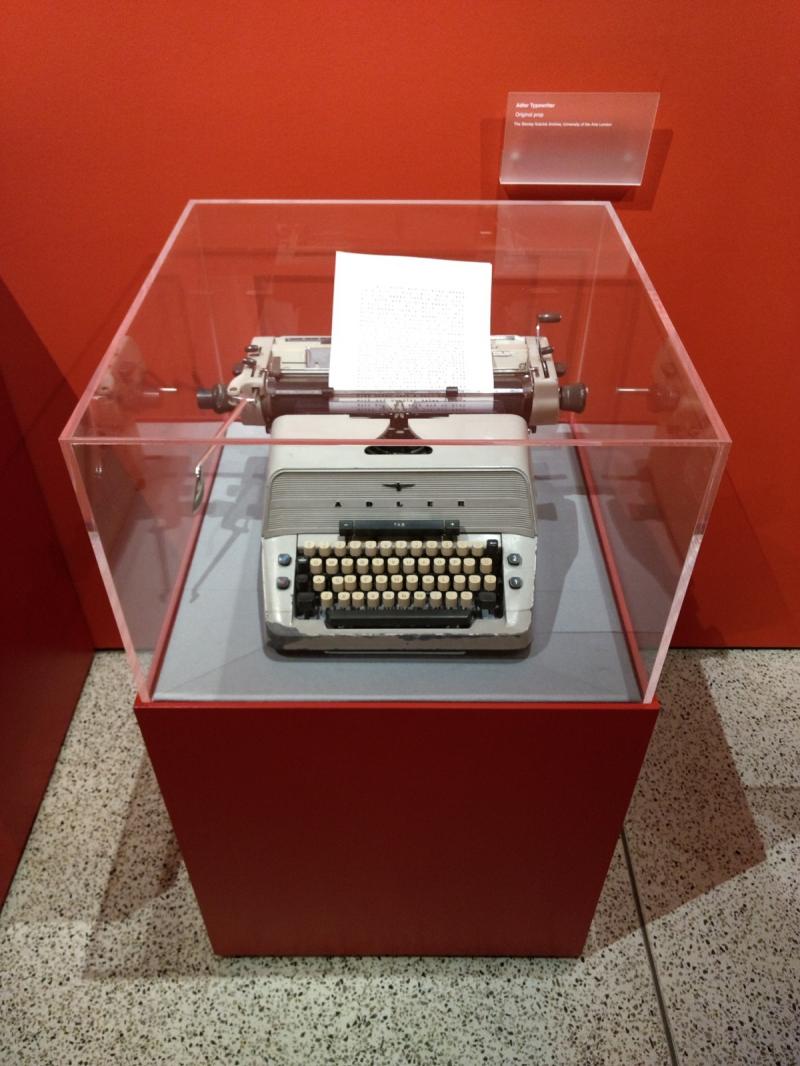 That said, there's a theory that the 'haunting' parts of the film are Jack Torrence dreaming his schlocky horror novel - inspired by Ullman's tale of the previous caretaker going mad and killing his family. It's a plausible one, and explains the sudden ill-fitting dip into ropey skeleton jump scares. Incidentally, if you want nightmares about crappy horror adaptations of your own you could always watch the Stephen King-scripted TV adaption.

War and conflict was a theme Kubrick returned to often. His generation saw the horrors of World War Two unfold while still recovering from the First World War, so it's no surprise it would have left such an indelible mark on him, especially being of Jewish ancestry. It's a well-known KuboFact that at several points in his life he had projects planned dealing with the Holocaust - most notably The Aryan Papers - although decided to eventually shelve the idea after Spielberg released Schindler's List, concentrating on A.I. instead. Thanks, Steve. The reason I'm writing so much here is because I forgot to take any photos of this bit. Can confirm there wasn't a ride-on A bomb.

"I haven't seen this one" my friend Ben admits. I knew he would. Nobody has. I have. It's very good, if a bit overlong and nothingy. Worth watching for the period detail and stunning vistas. A great performance from Ryan O'Neal too. Just make sure you've got plenty of water and snacks to keep you going if you do decide to watch it. 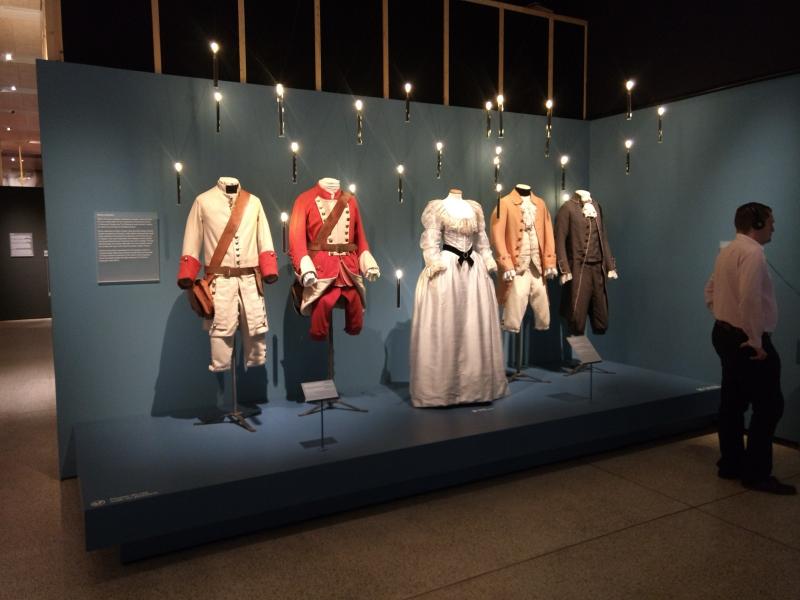 Barry Lyndon is also notable for being the start of Kubrick's working relationship with Leon Vitali. The excellent warts 'n' all documentary Filmworker profiles Vitali's dedication to Kubrick after leaving acting behind to become his assistant for twenty-odd years. Arguably we wouldn't have the films we do if it wasn't for Vitali sacrificing his every waking moment to cater to Kubrick's many whims. I bet he's glad Kubrick never lived to see Whatsapp.

You've probably figured out by now the exhibition isn't in chronological order, more like a nice few peaks and troughs of good-excellent-good-bad-good, presumably to prevent bottlenecks. 2001 was always going to be last, though: Kubrick's mad vision of the future and potential of the human race. Mysterious and expansive, dark and hopeful, linear and indescribable. It's an attempt to breach cosmic boundaries and imagine what awaits when we leave our earthly constraints behind to follow a celestial path.

Here's one of the monkey suits: 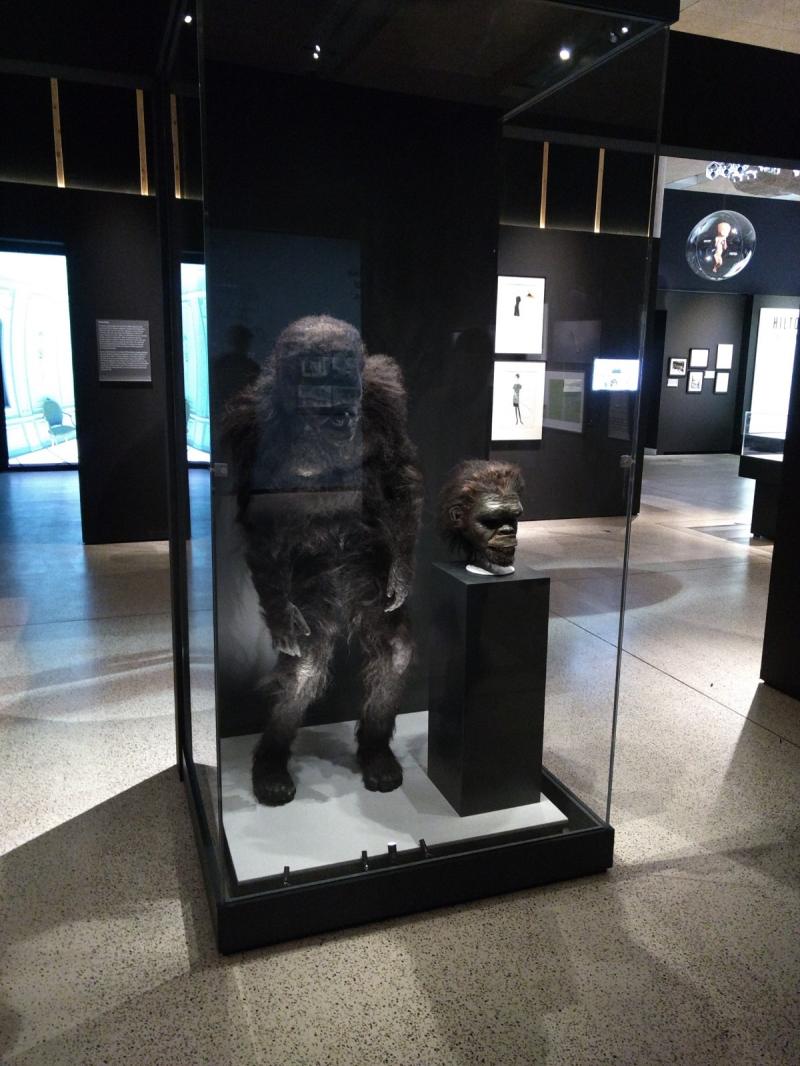 Disappointingly many of the models, props and drawings are recreations. I guess it was too much to expect some bits of plastic and paper from fifty years ago to survive this long, and nobody could have predicted the legacy Kubrick's films would have. 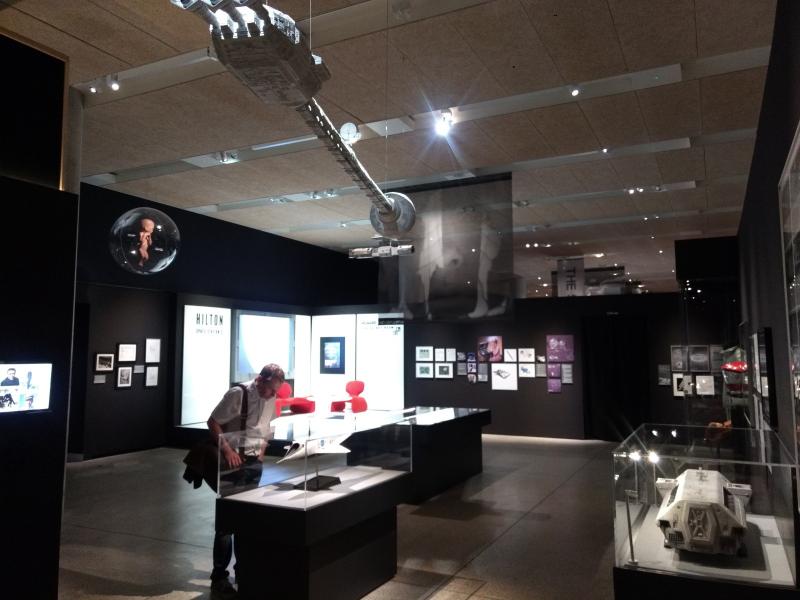 This is actual David Bowman's actual space helmet though: 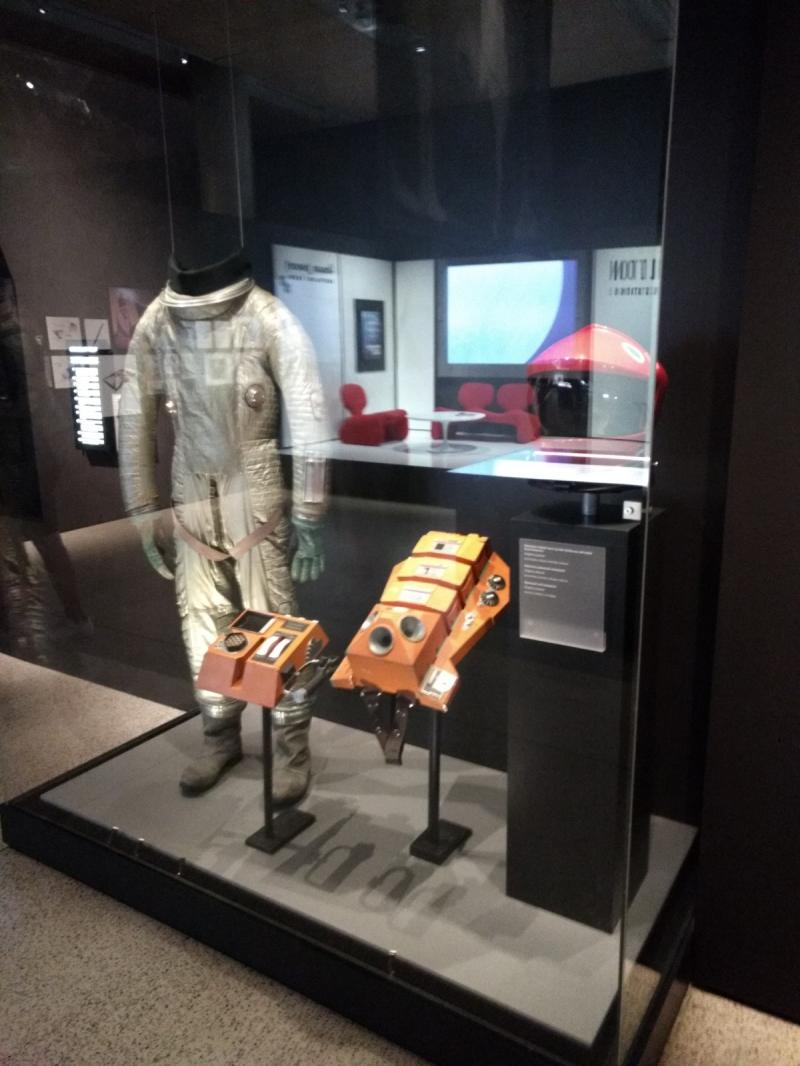 Another invitation to see if you can line up things with your camera as good as Kubrick could. Spoiler: you can't. Which is why there's an exhibition about Kubrick and not you. 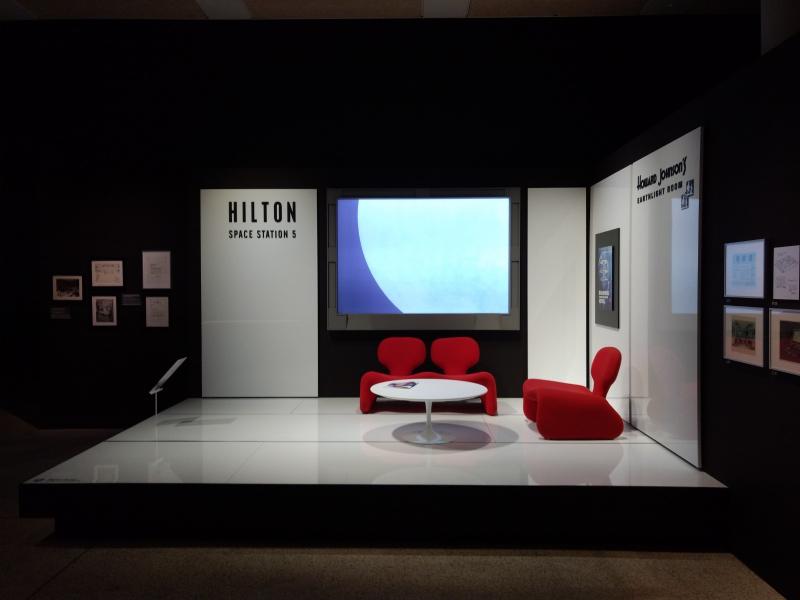 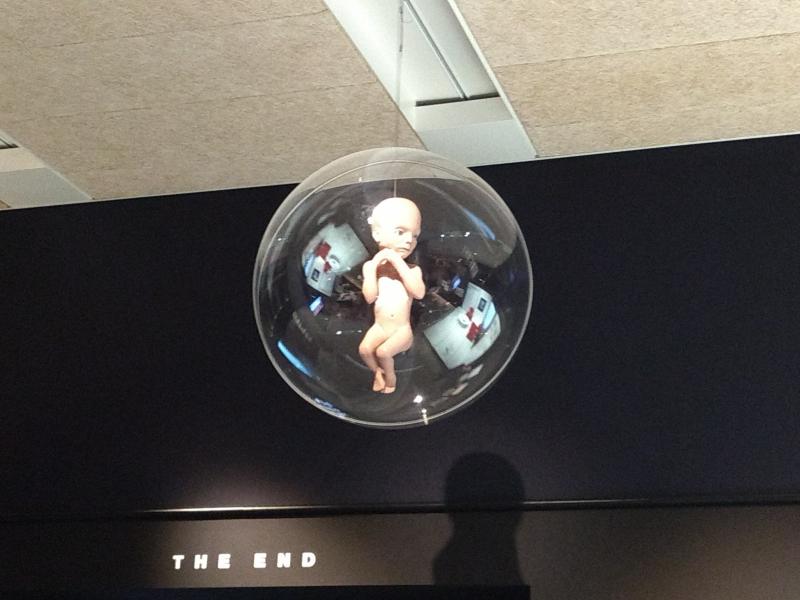 But what does the Star Child mean? Can humans be reborn on a higher plane with an evolved view of the universe? Will the Star Child grow and become a God-like entity to humans? Can anyone enter the stargate and become a Star Child? Something to think about on the walk to the McDonald's on Kensington High Street.

It's both a shame and a blessing that Kubrick never made more films. His manic attention to detail was his calling card, but it drove those around him potty, pushing patience to its limits as the time between his releases grew ever longer. To have tamed him would have robbed the world of an aggressively intelligent, inquisitive film-making talent, capable of conveying at one moment personal terror and the next expansive cosmic bliss, always leaving viewers seeking answers that seemed just beyond the reaches of our understanding. But if he had made more films then this engrossing and comprehensive collection of his personal effects and equipment would have taken ages to walk around.

UPDATE: Becky has written in to inform me she studied Kubrick for her degree, and is going to "punch my balls up into my brain" for throwing shade. Terrifying. If you want me I'll be hiding in my Stargate, by which I mean huffing permanent markers behind Asda.
Stanley Kubrick: The Exhibition is on display at The Design Museum in Kensington, London until 15th September 2019.
More:  Stanley Kubrick
Follow us on Twitter @The_Shiznit for more fun features, film reviews and occasional commentary on what the best type of crisps are.
We are using Patreon to cover our hosting fees. So please consider chucking a few digital pennies our way by clicking on this link. Thanks!