Not long until I can share my Fright Night screening reactions!

I saw horror remake Fright Night last week, but due to the embargo put on discussion about the film, I'm not allowed to tell you my reactions until July the 22nd. Let the countdown clock begin!


If, at any point, the following post begins to sound like an extended, privileged whinge, you have my permission to leave early and go and look at some LOLcats. This is just a personal bugbear and is in no way aimed towards the nice PR people who are just doing their jobs. Gawd bless 'em.

As part of the hip London film scene (*adjusts lens-less spectacles, tosses scarf*), I am frequently invited to advanced screenings of forthcoming films, where I loiter around the lobby and stand in the corner, avoiding eye contact with my superiors and hogging all the Kettle Chips.

The only downside to seeing new films for free is often the embargoes that the PRs put on discussing the film via your publication, website, Twitter feed or soapbox. Which is fair enough. You might have wonderful things to say about said movie, but the studio can't risk you bad-mouthing their product before it's on sale to the general public. So BOSH: you're given a deadline before which you can't utter a single word, good or bad. 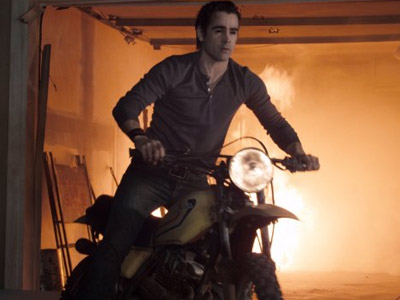 I can neither confirm nor deny that Colin Farrell is in this movie.


Most embargoes are quite reasonable - don't dish the dirt until at least the week of release. Some, however, are a mite silly. I once signed an embargo that lasted less than 24 hours. Others have signed one for six hours. Sometimes, you'll get embargoes that last for months, meaning that any journalists who saw and liked the film will probably have forgotten about it by the time the film is actually nearing release.

Fright Night, which I recently discovered was being distributed by Disney, has a really bizarre embargo. In fact, it has two.

Bear in mind I saw Fright Night on Wednesday the 6th of July. That's over three weeks before I'm even allowed to digitally acknowledge its existence. Even then, I'm not sure exactly what constitutes a 'reaction'. Maybe I should just post a picture of my face, reacting to the film. Which might be hard, because it'll have been nearly three weeks since I saw it. I'll probably just look confused, like I always do.

So, in accordance with the rules laid out by Walt Disney and friends, here begins the countdown to my Fright Night reactions. I'll post them on the site at 12am on the morning of July 22, as no time was specified. Me me me so excited!

More:  Fright Night  Embargoes  First World Problems
Follow us on Twitter @The_Shiznit for more fun features, film reviews and occasional commentary on what the best type of crisps are.
We are using Patreon to cover our hosting fees. So please consider chucking a few digital pennies our way by clicking on this link. Thanks!