Brace yourself for a whole new slew of Star Wars re-releases, complete with a whole new dimension. It's all Avatar's fault, apparently.

Avatar's monster success was just the catalyst that Hollywood needed to further push the medium of 3D. Before James Cameron's fantasy epic, audiences had mostly been exposed to 3D horseshit abominations like Scar and The Final Destination. Hardly game-changers. Now, post-Pandora, 3D is all anyone can talk about. Not only have audiences been convinced of what the extra dimension can offer, they're used to the idea of paying for the privilege. In other words, they've got us by the balls.

Sometime around the moment Avatar grossed one billion dollars, a hooded George Lucas sat back in his throne, drummed his fingers together and muttered, "Eeexcellent... everything is going as planned." Then there was a clap of thunder, and he ate some more solid gold Doritos.

It comes as no shock that Lucas might want to utilise 3D to give the Star Wars movies another polish. He's a filmmaker that's shown an alarming lack of respect towards his original, near-perfect trilogy; the 1997 Special Editions and DVD re-edits paint a portrait of a director who, like a toddler tonguing his loose tooth, just can't stop fiddling with that which intrigues him most.

But where a toddler might earn 20p for his missing tooth and doesn't know any better, Lucas is already a billionaire who knows exactly what he's doing. And that's why the decision to re-release Star Wars in 3D will anger millions. 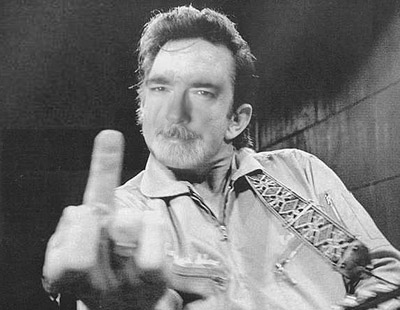 Image digitally altered to please modern audiences. So now you know how it feels.

Speaking to Access Hollywood in the wake of Avatar's unbelievable box-office success, Lucas revealed that James Cameron's mastery of 3D was just what he needed to justify another return to the trilogy.

"
"
"I liked it. I make movies like that, so I can appreciate what James Cameron went through to do it. I'm happy it's so successful, and worked very well in 3D. I haven't been a big fan of 3D, but that movie definitely improves in (the field of) 3D.

"We've been looking for years and years and years of trying to take Star Wars and put it in 3D, but the technology hasn't been there. We've been struggling with it, but I think this will be a new impetus to make that happen."
All of which is, of course, total bullshit from the Emperor of Planet Bullshit. Any technology that James Cameron created for Avatar is irrelevant, because he pioneered systems to help shoot a film in 3D - not convert an existing one. You can bet your last Republican credit that Lucas has been waiting for an excuse like this to blow the dust off his Skywalker Ranch editing suite and get back to tinkering with Obi-Wan's haircut or something. Maybe he could make Qui-Gon less useless.

It's not so much the idea of seeing Star Wars in 3D that leaves one feeling queasy - in fact, the Star Wars movies seem quite well suited to the medium. There are at least four or five sequences that instantly come to mind that would be mind-blowing with proper depth of field; the Death Star trench run, the Endor speeder chase and Episode I's pod race to name but a few. Let's face it - despite all the meddling of Grand Moff Lucas and his minions, the Star Wars movies remain utterly ace, and we'll go and see them again and again and again, like abused housewives going back home for another beating. 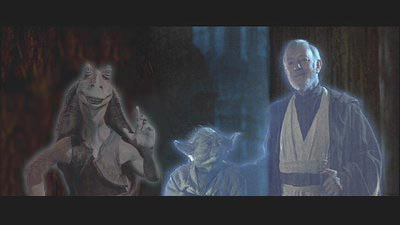 No, it's the crushing inevitability of yet more unnecessary changes to the original trilogy that makes us feel a bit sick. I mean, why wouldn't Lucas change even more? Did Han Solo have to shoot first in the Special Editions? Prior to the DVD release, did anyone ever actually complain that Anakin's force ghost should resemble Hayden Christensen? "Dear George Lucas, the fact that you have not digitally removed Sebastian Shaw's eyebrows in Return Of The Jedi is a disgrace. Please amend immediately. Yours sincerely, the voice in your head."

Face it - another Star Wars re-release means another round of 'digital upgrades' and 'photo-tinkering'. Who knows, maybe this time Alec Guinness will be completely computer generated, or perhaps Ewan McGregor's beard will be digitally de-gingered. Whatever helps you sleep at night, George. Sleep on your giant pile of money and broken dreams.

More:  Star Wars  Avatar  3D
Follow us on Twitter @The_Shiznit for more fun features, film reviews and occasional commentary on what the best type of crisps are.
We are using Patreon to cover our hosting fees. So please consider chucking a few digital pennies our way by clicking on this link. Thanks!