All of this means there are very few ways in which Jurassic Park can surprise me these days. It's still a delight, obviously, and there are always moments I appreciate more with each subsequent viewing (this time: noticing how little Tim is dressed exactly like Alan Grant, a detail which had inexplicably escaped me until now). I have always said that John Williams' score for Jurassic Park is his best work - hum the theme to E.T. right now, I dare you, you can't can you, because you're thinking of majestic dinosaurs - but it wasn't until I heard it being performed live that I was able to fully appreciate it in all the ways it deserves.

If you've never attended a movie accompanied with a live score, they're quite odd, because a) the sound quality of the actual movie is quite bad, except for the music, obviously, and b) if you get sucked into the movie you're watching, it's actually quite easy to forget there are dozens of professional musicians plucking and parping and plinking along approximately 5 degrees south of where you're looking. The Royal Philarmonic Concert Orchestra - or the RoyPhilConcOrc for short - are such consummate pros, their note-for-note recreation of one of cinema's most sublime scores could easily go unappreciated if you don't constantly remind your brain that actual instruments are pumping heaven into your earlobes and the tunes aren't just coming from some shitty speaker system at the back of the room. 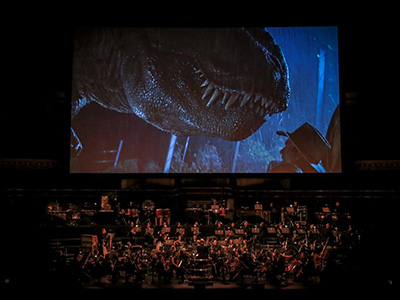 "Stay perfectly still. Its vision is based on hats."


Case in point: the central theme, that sweeping melody that choppers you away to an island in Costa Rica, is easy to notice and therefore appreciate, not least because of the ferocity and verve with which the musicians hammer away at their instruments. But have you ever noticed the incidental music played during the Mr DNA expository scene? Could you place it? Probably not, eh. But watching the men and women of the RoyPhilConcOrc knock out its incredibly complex melody - which, in all honesty is probably music that was never intended to be played live - was astonishing. It opened my eyes and ears and allowed me to appreciate the film's music on a whole new level. Even moreso than when me and the stag do ladiators downed sambuca shots during the Jurassic Park drinking game. Nedry squealed: DRINK!

Jurassic Park never fails to move me. It is not a particularly emotional film, favouring action beats over emotional ones, but it is my 'awakening' film that introduced me to the delights of the big screen and will always hold a special place in my heart. Watching the movie accompanied by actual bona fide musical genius - and in a venue so lavish it even has a special toilet for the Queen - was a unique and unforgettable experience that moved me more than ever before, because I realised halfway through I would probably never watch this, my favourite film, under more sensational circumstances. Again, unless the Italian TV version really kicks off after Nedry gets gobbed on by the little frilly fucker.

More:  Jurassic Park  Live  Royal Albert Hall  Music
Follow us on Twitter @The_Shiznit for more fun features, film reviews and occasional commentary on what the best type of crisps are.
We are using Patreon to cover our hosting fees. So please consider chucking a few digital pennies our way by clicking on this link. Thanks!