Rights for Nicolas Cage officially revert back to Marvel

The rights for popular comic character Nicolas Cage have lapsed and will revert back to Marvel Studios, after Sony admitted they had no plans for any more Nicolas Cage movies.


Fan favourite Nicolas Cage has a new home today, as he was officially handed back to Marvel Studios. The character – popular for his wildly over-the-top antics and bug-eyed gurning – was created by the comic-book studio in 1964, where his early adventures quickly found an audience thanks to his wacky haircuts and his ability to weird out squares. Marvel licensed Nicolas Cage to Sony in 2000 as part of a $50 million deal, but after a series of critical flops the studio deemed Cage surplus to requirements, claiming they were not pursuing any new storylines.

As of this morning, the full rights for Nicolas Cage lapsed and officially reverted back to Marvel. Though they have creative control over Nicolas Cage, Marvel do not have any firm plans to revive the character on screen right away. However, rumours from within Marvel Studios suggest that Cage could still play a part in future Avengers movies. Joss Whedon claimed on the press tour for The Avengers that Nicolas Cage was his favourite comic character and expressed regret that studio interference meant he wasn't able to include a cameo.

"Having Nicolas Cage back at Marvel Studios just feels right," said President Kevin Feige in a press release issued this morning. "I can confirm that we now own Nicolas Cage and all associated merchandising rights. It feels wonderful to have the character back alongside the comic-book greats where he belongs – it's been quiet around here without him." 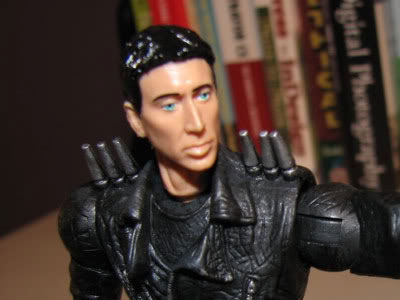 
When asked if Marvel were planning on developing a new, rebooted Nicolas Cage franchise, a spokesperson told us: "We have no plans for a new Nicolas Cage adventure as of now, but it'd be a crime to let such a great character go to waste. Nicolas Cage has such a rich back-story, which includes many incredible storylines that his devoted fanboys know and love. We can assure you that the character of Nicolas Cage is in good hands with us."

Marvel's acquisition of Cage has been well received by fans of the character. One messageboard user, bearing the avatar 'CagedBeast', wrote: "This is GREAT news for Nicolas Cage fans. Sony couldnt [sic] write a Cage adventure to save their lives, Marvel will finally do the character justice. Really hope they tackle the 'Ultimate Nicolas Cage' storyline."

The news comes after reports last December that Sony were toying with the idea of recasting Nicolas Cage for a reboot targeted at the teen market. Despite hiring Damon Lindelof to craft a new origin story for Cage, the studio decided to cut their losses, deciding that they couldn't keep the character true to his roots in a PG-13 movie. Young actors like Adam Driver and Dane DeHaan showed public interest in Nicolas Cage, but script problems meant he languished in development hell until his rights eventually lapsed.

Sony have countered the news of Cage's departure by announcing plans to develop a new Gary Busey franchise.

More:  Nicolas Cage  Marvel  DUH SATIRE
Follow us on Twitter @The_Shiznit for more fun features, film reviews and occasional commentary on what the best type of crisps are.
We are using Patreon to cover our hosting fees. So please consider chucking a few digital pennies our way by clicking on this link. Thanks!