Attendees of the current Star Wars-themed Secret Cinema live event have reacted with shock and awe to the arrival of a ticket holder who came dressed as lovable space rogue Han Solo. "How did no one else think of this?" said an amazed onlooker.


Rumours began to spread early on Sunday evening that someone had shown up to the live cinema event dressed in clothes similar to those worn by the rakish space smuggler memorably played by Harrison Ford in the Star Wars trilogy. Though Secret Cinema ticket holders are encouraged to dress up as their favourite characters from George Lucas' iconic space opera saga, none of the 12,451 fans who have so far attended the event had thought to dress like Han Solo until the arrival of Chris Thripson, 29, from Shoreditch.

"Yeah, it like, had to be Han for me," said Thripson as he swaggered through an approximation of the Cantina bar with a plastic gun holstered in a mobile phone hip case. "I know it's a pretty out there choice for a costume, but me and Solo are both rebels and outlaws and I already had a black waistcoat, so..." He then shrugged before heading in the direction of a woman dressed in a gold bikini. 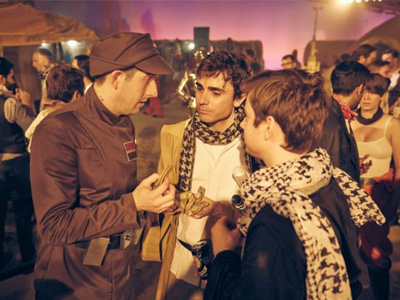 Attendees agree they can't quite believe what they've seen today.


Thripson's astonishingly original costume choice caused shockwaves throughout Secret Cinema, with fellow attendees clamouring around him to take selfies and to touch his garments. "I spent a total of sixteen hours building a Gamorrean Guard costume out of egg boxes and poster paints to try and look cool," said Star Wars fan George Jepson. "This guy waltzed in wearing dark blue trousers with red lining and an open-necked white shirt and just absolutely nailed it. I might actually go home."

"Han Solo," muttered 51-year-old Star Wars fanatic Alan Christchurch. "I never would have thought of that."

Thripson calls himself "a total Star Wars nerd" and claims he's seen the movies "at least five times... each". Friends of the web designer suggested he should dress as Luke Skywalker or Obi-Wan Kenobi, but Thripson had other ideas. "As soon as I heard they were doing Star Wars for Secret Cinema, I knew I would dress as Han," he said. "I kept it a secret for months in case anyone stole my idea." Last year, Thripson won acclaim when he attended the Back To The Future-themed Secret Cinema event dressed as Marty McFly.

Secret Cinema organiser Fabien Riggall personally congratulated Thripson on his Han Solo costume backstage at the South-East London performance arena, claiming he never expected anyone to put so much thought into their attire. "This guy gets it," said Riggall. "He's why we're all here."

Harrison Ford himself got involved in the excitement on Sunday evening when he tweeted a link to a story about Thripson's amazing Han Solo costume on Digital Spy, with the comment: "The Force is strong in this one." Mark Hamill and Carrie Fisher both RTd the post.

It topped off an exciting weekend for Secret Cinema: Star Wars after a black guy turned up on Saturday dressed like Lando Calrissian.

More:  Star Wars  Secret Cinema  Harrison Ford
Follow us on Twitter @The_Shiznit for more fun features, film reviews and occasional commentary on what the best type of crisps are.
We are using Patreon to cover our hosting fees. So please consider chucking a few digital pennies our way by clicking on this link. Thanks!