Sundance London: all of your (fake) questions answered!

The Sundance Film Festival ? In London? But isn't Sundance exclusively the domain of rugged American men in cowboy hats buying hugely hyped movies for millions of dollars? Not any more, bucko!


Run this by me again? Sundance... in London?
You heard. Robert Redford - he of the aforementioned cowboy hat - and John Cooper have decided in their infinite wisdom to branch out and bring their film festival to our shores. Keep April 26-29 free if you fancy it.

Can I go? Where is it?
It's being held at the O2 in North Greenwich aka that big dome-shaped thing with all the overpriced restaurants in it. I'm assuming this means all screenings will be held in the vast Cineworld situated in the middle - just about the most soulless cinema on the planet - but individual customer tickets are on sale now, "from" £11.50. 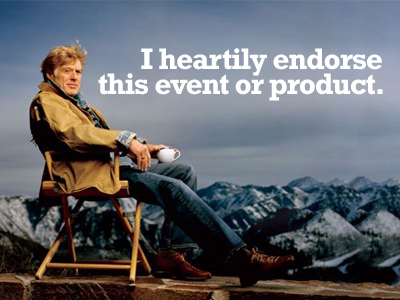 Will Bobert Bedford be there?
I'll go ahead and assume you mean Robert Redford, and yes, he'll be jetting in (he's probably not getting there on the Jubilee Line) for the opening night, when he and blues legend T Bone Burnett will kick things off with an on-stage discussion about film and music. He probably won't be making an on-stage apology for Lions For Lambs, though.

Is there a chance I could run into Bobert in Pizza Express?
Yes. Redford is a well-known patron of the taste card and has been known to demolish the odd American Hot in his time.

So which films are showing?
If you're hoping for a sneak peek of The Dark Knight Rises, keep dreaming. Sundance is all about films of special interest: enlightening documentaries, challenging dramas and independent films starring people you've probably never heard of. Here's the full list of the 14 films receiving their UK premieres at Sundance London: click on the thumbnails below for bigger pics and the official festival synopses.


How many of those films are British, incidentally?
Just the one. Try harder next year, Britain!

Which ones are you most excited about seeing, Ali?
Why, thanks for asking! Safety Not Guaranteed looks like it might be straight up my alley (time travel, nerds, Aubrey Plaza), Liberal Arts looks like it should just limbo under the bar marked 'Too Cutesy' and Shut Up And Play The Hits should satisfy lovers of LCD Soundsystem who can't be arsed to go to the gigs but are more than willing to make a tit of themselves by dancing in a cinema, i.e. me.

Films are all well and good, but will there be hob-nobbing?
Fret not, autograph hunters and celebrity stalkers: there will be a whole host of big names from the world of film, attending under the pretence of the Sundance London Host Committee. Though we'll doubt they'll be handing out 3D glasses or topping up your complimentary drinks, you will see these famous faces in some capacity, "as far as their schedules allow" (so maybe don't quit your job to come and see Stephen Frears).

What about music? Is there any of that?
Yes, actually. There will be a non-ticketed Music Cafe with plenty of guitar noodling and no doubt a few Ross Gellers on the experiment keyboards, plus there will be proper serious famous performers, too. Tricky (nineteenth male lead in The Fifth Element) will be performing Maxinquaye in its entirety (a sentence that means nothing to anyone born after 1995) and Placebo promise an "intimate concert" which hopefully doesn't mean Brian Molko starts humping your leg or something.

Is there some sort of 'official' 'website' that can give me more information on Sundance London?
Point your face at sundance-london.com if my sarcastic Q&A didn't fulfill all your Sundance-related needs.

Did you apply for press accreditation?
I did. Haven't heard anything yet.

Are you worried the PRs organising the event read your liveblog of the Empire Awards and decided against inviting you?
I am not commenting on this matter.

More:  Sundance London  Events  Robert Redford
Follow us on Twitter @The_Shiznit for more fun features, film reviews and occasional commentary on what the best type of crisps are.
We are using Patreon to cover our hosting fees. So please consider chucking a few digital pennies our way by clicking on this link. Thanks!