Taking a literal approach to the Behind The Candelabra poster

WARNING: no gay jokes within.


As The Shiznit's formerly-incredibly-suited Neil sagely pointed out on Twitter today, film and TV poster taglines often deal in somewhat literal interpretations. So imagine my dismay to see the new poster for HBO's forthcoming Liberaceathon Behind The Candelabra, courtesy of EW.com, make no attempt whatsoever to describe in simple terms the image it presented.

How is it supposed to direct us to watch it if it doesn't anchor us in the simple, mundane reality of what we're seeing before our very eyes? It needed fixing. And there was only one man for that job. But Ali was asleep, so I did it. If you're the sort of person who enjoys rolling over things to reveal them, do so below. 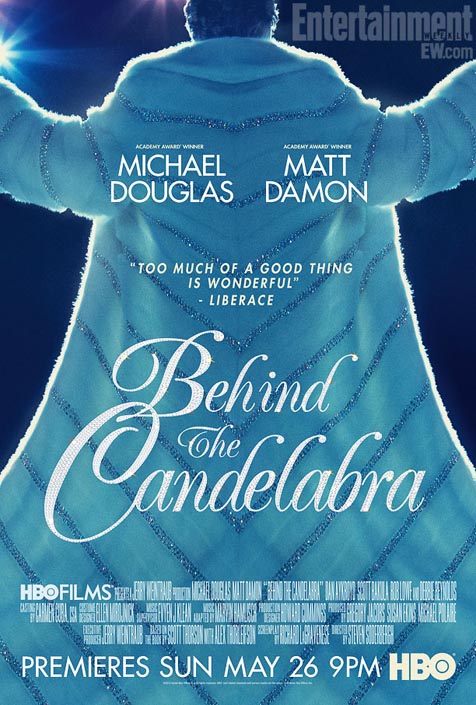 Like I said, roll over to reveal.
As we ease into spring and the weather changes, I find myself agonising each morning over which coat will be most appropriate to the temperature outside. I never imagine that this is a predicament by which Liberace was overly troubled.

More:  Behind The Candelabra  Michael Douglas  Matt Damon  Rob Lowe  HBO
Follow us on Twitter @The_Shiznit for more fun features, film reviews and occasional commentary on what the best type of crisps are.
We are using Patreon to cover our hosting fees. So please consider chucking a few digital pennies our way by clicking on this link. Thanks!