Tell no one, but Secret Cinema is really rather brilliant

I went to Secret Cinema's Back To The Future event and had a great time. It was spectacular, inventive, engaging and completely and utterly every bit the definition of 'harmless fun'. But that's not a popular opinion at the moment, so shhh. Tell no one.


There was a time a few years ago when Secret Cinema actually felt like a secret. Like a hidden corner of the movie-going experience that was whispered between the film enthusiast elite. You signed up, travelled to a location disclosed only on the day and then got taken to a discreet venue for a unique experience that celebrated the very best of cinema. And then you had the pleasure of telling your friends about it afterward; teasing only enough information to emphasise how amazing your evening was, leaving them to wonder how they can get an invite to what is apparently an exclusive VIP event.

Now, the secret is out. Secret Cinema is firmly established in the mainstream and most have formed an opinion about it without ever even attending one of its many immersive screenings. Gone are the days when you felt like a special member of a secret club, a film hipster espousing your own rare, prestigious find.

Case in point, I recently discussed Secret Cinema's latest event with a friend and felt a thrill as I discovered that she was one of the remaining few that hadn't heard of it. After I enthused cryptically about its many elusive facets, she seemed impressed and asked how I found out about the latest film screening, to which I had to reply "Er… I follow them on Facebook".

But that's all okay. Secret Cinema events have been selling out for so many years, it’s difficult to argue that they are doing the same themselves. The question now, however, is whether the popularity bubble has burst. They have had a particularly 'heavy' couple of months in the run-up to their epic Back To The Future event and it has led many to ask whether or not, in trying to recreate an entire 50s-themed Hill Valley locale in which to host their most immersive screening to date, they have taken on more than they can handle. 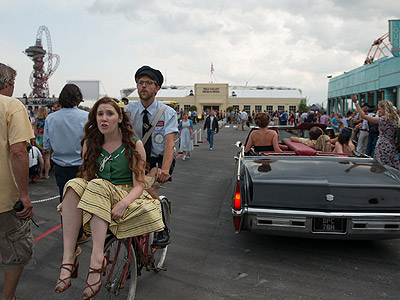 
Of course, when I say many are asking this question, that's just me reading between the backlash. Because with the increase in popularity there has come a ready-made mob poised to pounce the second that things go awry. This isn't to say that mistakes weren't made by Secret Cinema, or that things couldn't have been handled better, but if there's one thing to take away from the Back To The Future debacle, it's that Twitter really can be a vile pit of needless, self-righteous fury sometimes.

It started with the ticket prices. £53+ to attend a screening of a 30-year-old movie, you say? How DARE they charge those prices! That's extortionate. I mean, I have no idea of the production costs for this kind of thing, but charging that much money for a ticket – which is as much, and indeed often much less, than you'd expect to pay for a high-profile stadium gig – can never be right, can it? Everybody must be outraged. Apart from, of course, those that were happy to pay the amount because they had faith that the evening would be worth it. Those people were probably okay with the idea. I forget what the problem is.

Then came the issues with the tickets going on sale. When it came to release time, the site collapsed under the weight of the high demand (despite prices). Jesus, Secret Cinema – get your shit together! You must have known how popular this would be. And you must have, in turn, informed providers Ticketscript about the sudden surge in traffic. Which apparently you did. And they apparently promised you they could handle it but failed, causing you to halt sales and ask everyone to come back the next day when you would use a better, more efficient ticket provider. How… unreasonable.

But then there was the real kicker. Secret Cinema was forced to cancel its opening night, and did so mere hours before the event was due to start, a move that was considerably gutting for those that had travelled from afar and had left their phones at home under the instruction that they didn't "exist in the world of Hill Valley". A promise was made that attendees of the next evening would know their fate at 11am that day. In actual fact, they had to wait until 3.30pm, a time at which many could have feasibly begun travelling in order to meet the 5.15pm start time again. Shortly afterwards, Secret Cinema announced that the first week's worth of screenings would have to be cancelled. Suddenly, my Twitter feed hit 88 tweets per second and Secret Cinema saw some serious shit.

Because during this period of roughly 28 hours, everybody – whether they had a ticket or not, whether they were personally invested in the event or not – had something to say on the matter. You had the elitists who smugly patronised with suggestions that event cinema was for a lower class of cinephile anyway, the rumour-mongers who criticised Secret Cinema over supposed facts of their incompetence (despite us STILL not knowing the full story), and those that missed the point completely with endless – oh god, endless - jokes about simply watching it on Blu-ray that evening. 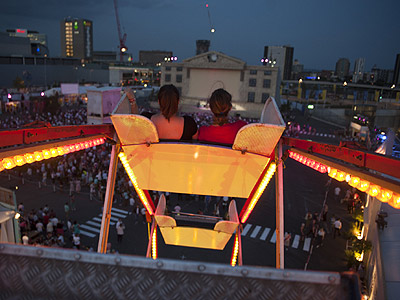 Yeah. That's the same as this.


In case it wasn't clear already, I am something of a Secret Cinema apologist. Personally, I think the idea of visiting a venue meticulously dressed to imitate and embody the setting and spirit of my favourite movies and then drinking and eating and generally being merry all in the name of cinema is kind of, and forgive me for saying it, fun. And with that in mind, I am obviously more inclined to give Secret Cinema the benefit of the doubt when it comes to apportioning blame.

So here goes. Who knows why Secret Cinema had to cancel any of those dates? All company creator Fabien Riggall will say is that they have been working hard with the local council to overcome certain difficulties. Although he has categorically denied that it was down to them not being ready on time, which gives reason to question those unvalidated, out-of-context pics giving "irrefutable proof that they're still painting the sets". He has also stated that it wasn't a health and safety issue, which rules out the most obvious and worrying reason.

Regardless of the cause though, the real problem here, and really the only mistake that can be directly attributed to Secret Cinema amidst all of the fuss and fiasco, is them hanging on too long before making the decision to cancel. If there was a possibility that the evening might not have gone ahead for each evening, the cut-off point for that decision should have been much sooner than the late afternoon announcements they gave customers.

Without getting into all the Facebook rage from people claiming to have travelled from Zambia or quit their jobs in order to attend (which are all complaints that are typical of any last-minute event cancellation), it is the pitchfork-mentality of Twitter that will have done the most irreparable damage to Secret Cinema's reputation rather than their own administrative errors. 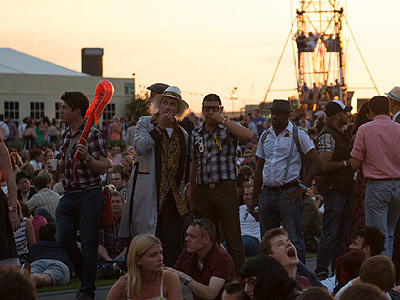 Has anyone even checked Doc Brown's actual doctorate?


Admittedly, I come at this whole issue from an ultimately unaffected position. I followed the cancellation news with great interest but was luckily still able to attend my chosen date trouble-free.

The review that this article should really be would have remarked upon the incredible effort taken to recreate an entire town with perfect attention to detail, despite the looming John Lewis building next door slightly ruining the aesthetic. The review would have also complimented the hundreds of actors and actresses who improvise in character to not only enhance the look and feel of the 50s Hill Valley but also to joke and jest and engage to make sure that you are actually having a laugh at its expense too.

It would have suggested that the sheer scale of the project resulted in less interaction with the main characters than in previous efforts, but that the huge array of sights and activities on hand more than made up for it. It would have also teased the idea of not giving too much away and would have probably ended on a knowing nod to the film. Something like "Some guys won't be ready for it yet, but some kids are gonna love it". Or something like "It's Johnny B Great!" if I was really in a rush.

As it is though, the whole ticketing and cancellation situation has overshadowed an incredible feat by Secret Cinema - an undertaking that simply has no equal in terms of scale and ambition. This should have been remembered as the event of the summer. Instead, it will be remembered as the time that Secret Cinema fucked up, something that will no doubt affect future productions for the foreseeable years.

But then - just maybe - Secret Cinema will be forced to lurk back in the shadows again for a little while, reverting back to its former cult-like status as it earns back some trust. The fact that either scenario would appeal equally to fans proves that it's in no danger of going anywhere yet.

More:  Secret Cinema  Future Cinema  Back To The Future
Follow us on Twitter @The_Shiznit for more fun features, film reviews and occasional commentary on what the best type of crisps are.
We are using Patreon to cover our hosting fees. So please consider chucking a few digital pennies our way by clicking on this link. Thanks!